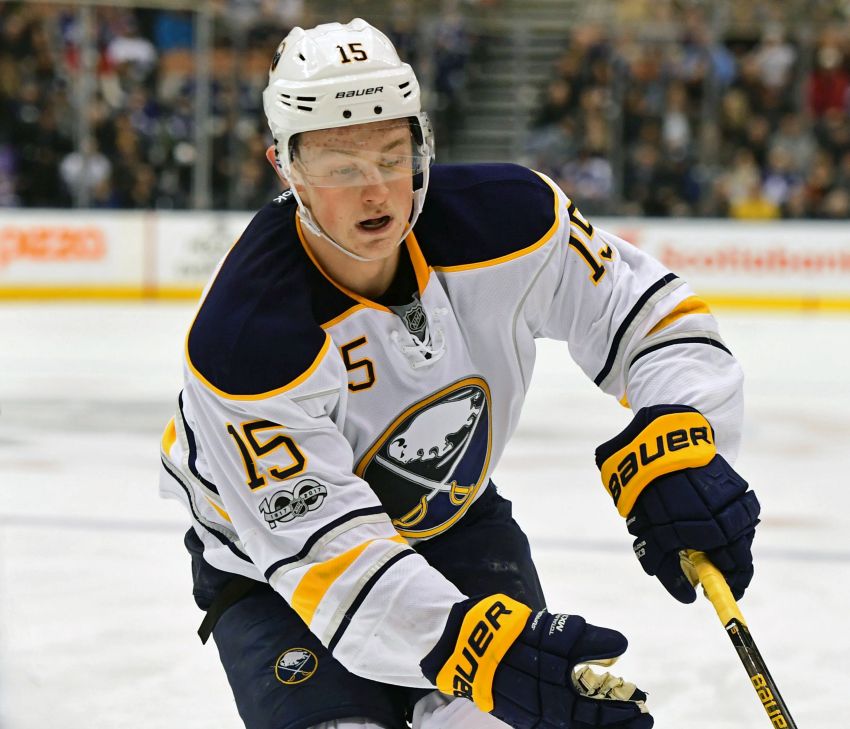 PITTSBURGH – For one period Sunday, everything went right for the Buffalo Sabres.

They jumped out to a seemingly commanding lead, scoring three times by the 18:07 mark. The Penguins, meanwhile, couldn’t beat Sabres goalie Anders Nilsson, who stopped all 13 first-period shots. One Penguins goal was called back following a review. They also hit a post.

The reeling Sabres have a penchant for blowing late leads. The Penguins, the defending Stanley Cup champions, also possess arguably the NHL’s most dynamic offense in a decade.

By late in the second period, the Penguins seized control, getting within a goal. Jake Guentzel’s lucky deflection tied it 16:14 into the third period.

The Sabres, incredibly, blew a third-period lead and lost for the third time in a week.

What the heck happened? A frustrated Jack Eichel tried to explain.

“We played aggressive in the first and then sit back and let them take it to us in the second and third,” said Sabres center said. “It’s the tale of every game we’ve played in the last few, so nothing changes. We blew another lead.”

The Sabres also imploded late last Sunday in Arizona and Tuesday to Nashville.

The talented Eichel, whose goal extended his career-best point streak to 10 games, has been adamant the Sabres must stop sitting on leads and start pushing for another goal.

Of course, the Sabres had a season-high 49 shots, so did they really sit back that much?

A push from the Penguins was to be expected. The Sabres also kept up some pressure, pumping 28 shots on Penguins goalie Marc-Andre Fleury, who replaced Matt Murray after the first period.

“We knew they were going to come out harder, come out faster in the second period,” said Nilsson, who made 41 saves. “At the same time, we stepped back a little bit.”

Eichel said the Sabres gave the Penguins “way too much.”

“A team like that, you just can’t sit back and let them pick the puck up in their own zone and skate at you,” he said. “That’s what we did. We just backed in on Nils. We were lucky to get it as far as we did.

“We played a good first period, got away from what we did. That’s the tale of the story. It seems like it’s kind of a reoccurring theme with us right now.”

Evgeni Malkin’s power-play goal narrowed it to 3-2 13:42 into the second period.

The fluky tying goal – the puck deflected off Sabres defenseman Zach Bogosian’s stick and off Guentzel’s stick, which appeared to be too high – was reviewed.

“The high-sticking rule, as it is, is hard to overturn,” Bylsma said.

Sheary then converted Schultz’s slap pass as he streaked down the left circle.

Among their 39 losses, the Sabres have a lot of frustrating ones. Sunday’s was another punch in the gut.

“We’ve had a few of these lately,” Bylsma said. “Each one is a bigger blow to where we’re at in the standings.”

The Sabres are near the bottom of the Eastern Conference standings, meaning they’ll almost certainly miss the playoffs for the sixth straight season.

For a while Sunday, however, it looked like they might earn a victory that could send them on a late-season run.

The crowd of 18,653 inside PPG Paints Arena was stunned.

The Sabres often start games hot. What gets them going early?

Nilsson never tired in only his second start in 13 games, looking sharp throughout his 22nd appearance this season.

“He was great,” Bylsma said. “He was calm and control. There was a couple misdirection plays, tip plays that he made great saves on.”

Eichel’s point streak (three goals, 10 assists) is the NHL’s longest active run. The Penguins were the only team he hadn’t recorded a point against.

The Sabres held Penguins superstar Sidney Crosby pointless for only the second time in 25 games.