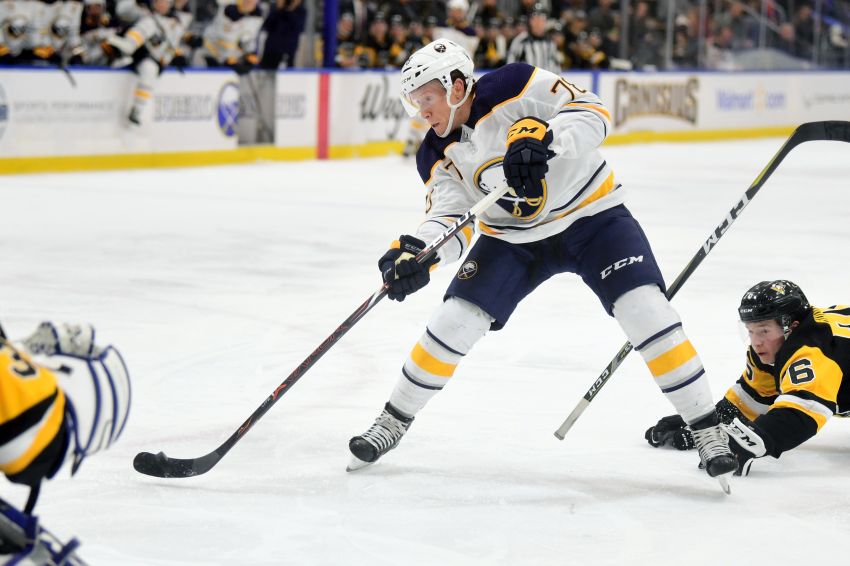 BUFFALO – Part of the fun of rookie camps can often be watching the variety of youngsters participating.

The Sabres had four first-round picks, including this year’s No. 1 overall selection, defenseman Rasmus Dahlin, on their Prospects Challenge roster. They also had seven undrafted players, including center Myles Powell, an R.I.T. product.

That meant prospects from opposite ends of the spectrum could connect to make memorable moments.

Powell, for example, created Dahlin’s winning score in Friday’s 6-4 win against the New Jersey Devils by pumping a shot on net. The rebound bounced to Dahlin, who buried the puck from the left circle.

The 5-foot-9, 174-pound Powell has an AHL contract for 2018-19. He began his pro career late last season, playing four games for the Rochester Americans and another five with the Cincinnati Cyclones, the Sabres’ ECHL affiliate.

Even if Powell never plays a real NHL game, he can can always say he assisted on one of Dahlin’s goals.

For Powell, 24, that special play, which ignited the HarborCenter crowd, was “surreal.”

“First overall pick from (this) year, (Dahlin is) going to do some big things, I think, in the NHL,” a smiling Powell said after recording a goal and two points in Monday afternoon’s 10-2 annihilation of the Pittsburgh Penguins. “It’s crazy to think about that, but (I’m) just happy to be here.”

Powell’s stellar career at R.I.T. – he recorded 45 goals and 105 points in 149 games over four years – put him on Buffalo’s radar. Last season, his 13 goals and 39 points in 37 contests both ranked second on the Tigers.

“I’ve always had good confidence in myself and my abilities,” Powell said. “When you get noticed and get invited to these things, it feels good. To play against these top guys and their top prospects and fit in out here, gives you that extra belief in yourself.”

Powell, who graduated with a finance degree, said he has always thought about becoming a teacher. That dream, however, is on hold now for another one.

“I just want to play pro hockey for now and I’ll figure it out later, I guess,” Powell said.

The Sabres assigned Powell to the Amerks following the game.

Two days before veterans must report for their training camp physicals, the official start of the new season, Sabres winger Sam Reinhart is still unsigned.

“I’m excited that Sam’s in town here working out with our guys, being a part of things,” Botterill said Monday “We continue our dialogue with his agent and (we are) still very hopeful to get a deal done.”

The Sabres scratched many of their best prospects against the Penguins, sitting out Dahlin, defensemen Will Borgen and Brendan Guhle and winger Tage Thompson.

The Sabres finished the three-game tournament 2-1.

In the second period, Mittelstadt lost his helmet and skated to the bench. When an official grabbed it and threw it back to Mittelstadt, he wasn’t ready, so it hit him in the face.

The official then picked it up again and handed it to Mittelstadt.

“He apologized like 10 times,” Mittelstadt said. “I think I was probably not looking. I’m sure it was just an accident. He did a great job all weekend, so no problem there.”

A year ago, the Sabres invited defenseman Cody Goloubef to camp, although he did not earn a roster spot.