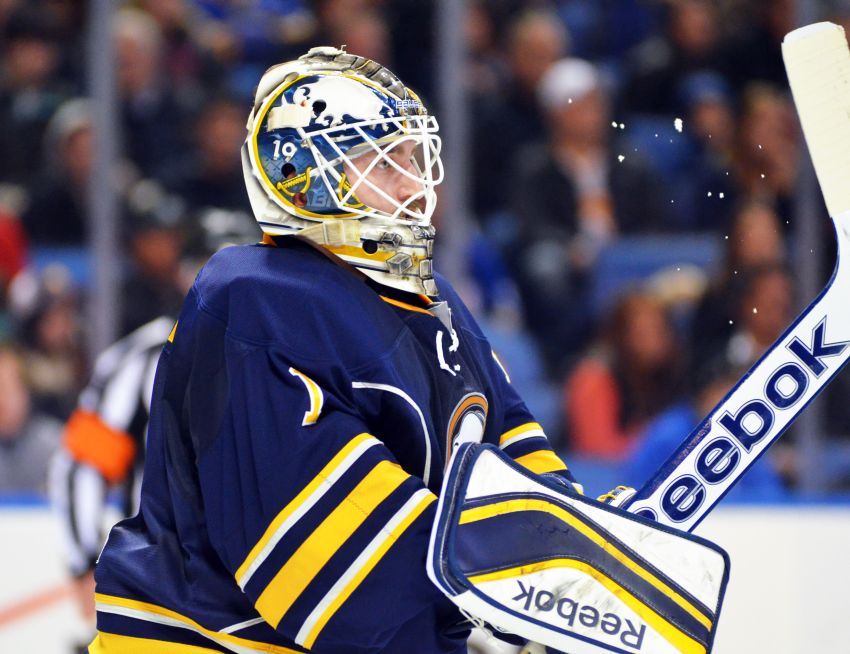 BUFFALO – Jhonas Enroth walked over to a hoard of cameras and reporters looking sullen following the Sabres’ 2-1 shootout loss to Florida.

The backup goalie stopped 34 shots Thursday, keeping his teammates in a contest they deserved to lose in regulation.

But the Sabres only mustered a single goal for Enroth again, the seventh time they’ve scored one goal or been blanked in front of the 25-year-old.

“I don’t know,” Enroth said when asked about the lack of support. “I’m running out of answers on those questions.”

In 804 minutes over 14 appearances this season, the bottom-feeding Sabres have scored just 18 goals for the Swede, who’s been sharp from the get-go. They’ve scored 17 times in his 13 starts.

Despite an awful 1-8-4 record, by far the NHL’s worst mark for a No. 2 netminder, Enroth has a strong 2.46 goals-against average and .916 save percentage.

He has a 1.97 goals-against average and .935 save percentage in his last four starts.

“It’s tough to win with this team,” Enroth said in response to a question about generating momentum from a penalty kill.

Teammates want to win badly for Enroth, who earned his lone triumph while making a season-high 44 saves Oct. 25 in Florida.

Every other regular NHL backup has at least four wins.

“He was sensational,” interim Sabres coach Ted Nolan said following the defeat. “If there was any game your goaltender could probably steal the game, (Thursday) was probably one of those nights.”

It was a night Enroth, one of three goalies named to the Swedish Olympic team Tuesday, wanted to prove himself.

“I wanted to go out there and show everybody that I earned it,” he said.

The Sabres, who had Friday off, sent defenseman Brayden McNabb to Rochester. McNabb played in the Americans’ 2-1 loss to Hamilton before apparently getting recall again, according to the Rochester Democrat and Chronicle.

The 22-year-old, an AHL All-Star, has zero points in six NHL games.