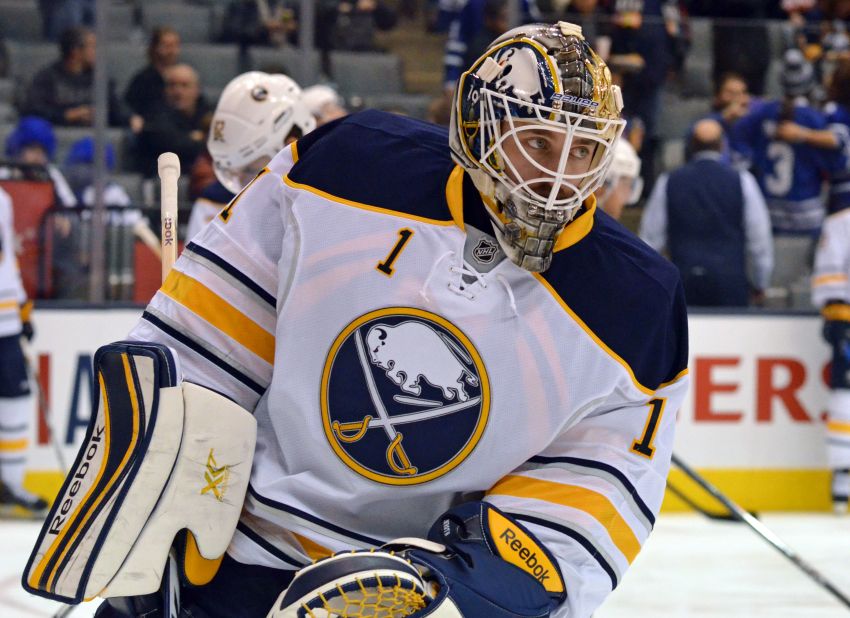 Jhonas Enroth has only one win this season. ©2013, Dan Hickling, Olean Times Herald

BUFFALO – Right now, Jhonas Enroth’s frustration extends beyond losing games with the Sabres. The backup goalie is also losing ground in his battle to earn a spot on Sweden’s Olympic roster for the upcoming Sochi Games.

“Personally, other Swedish goalies are winning right now,” Enroth said Monday following practice inside the First Niagara Center. “It’s all stressing me out actually a little bit, not too much. Obviously, you think about the Olympics and you want to make that team.

“It’s tough to get some credit when you don’t win games, and that’s what it’s all about, winning games.”

So far, Enroth’s 1-5-2 in nine appearances this season, his only win coming Oct. 25 in Florida. But the 25-year-old has played well, compiling a 2.63 goals-against average and a .911 save percentage.

In Saturday’s 1-0 loss in New Jersey, he made 23 stops before Steve Bernier scored with just 41 seconds left in overtime.

“It felt real good, actually,” Enroth said. “I had a strong game. But, obviously, it sucked right after the game, so close to a shutout, so close to pushing it to a shootout.”

Enroth’s certainly been deserving of a better fate most nights.

“Both our goalies have been awesome the whole year,” Sabres captain Steve Ott said. “Both of them have probably been our two best players, consistent players, anyhow.

“Jhonas, we know when he steps in, every chance he gets he does good things, and he played extremely well. He gave us a chance to win.”

Enroth parlayed the trust he earned from Rolston late last season into weekly action earlier this campaign. But Nolan has strongly hinted he’s interested in giving franchise netminder Ryan Miller all the work he can handle.

Does Enroth think he should be playing more?

“Obviously, it’s not like I’ve been winning four straight games here,” said Enroth, who said he hasn’t talked to Nolan a lot. “So it’s hard to say. But, obviously, I want to play more. I feel like I should take the next step soon.”

Enroth played so-so in his first start under Nolan, a 4-2 loss Nov. 16 in Toronto. He didn’t play again until Saturday.

“I’ll talk to the goaltending coach about that and see how Ryan’s feeling,” Nolan said Monday about his plan for playing Enroth. “Jhonas, the way he played the other night, he played great. He really did play a strong game for us. We’ll probably do the same thing that we have been doing lately, and we’ll see how it works out.”

That means Enroth could only play two or three times this month.

“It’s one of my goals this year, to make that (Olympic) team,” Enroth said. “So I still have maybe a month left here. So I’m going to try to be very sharp.”

Enroth was sharp down the stretch in 2012-13, saving his Buffalo career by going 4-1-1 with a 1.47 goals-against average, a .956 save percentage and one shutout in his last six starts. He then backstopped Sweden to a gold medal at the world championship.

Sweden invited Enroth to its Olympic camp in August.

New York Rangers star Henrik Lundqvist is a lock to be Sweden’s starting goalie. The other two spots are up for grabs, however.

Sweden’s coach, Par Marts, coached Enroth at the world championship and in junior, so he’s hopeful that could help.

“The other Swedish goalies are winning a lot of games right now,” Enroth said. “So we’ll see. It’s going to be a tough race.”

Enroth hasn’t lost faith in his own abilities. He said following last season he’s ready to be a No. 1 goalie, something he repeated Monday.

With Miller a free agent following the season, he could be a starter soon.

Of course, Enroth’s not going to cause a fuss. The goalies are still close and talk a lot. Enroth said he enjoys Miller’s company and playing with him.