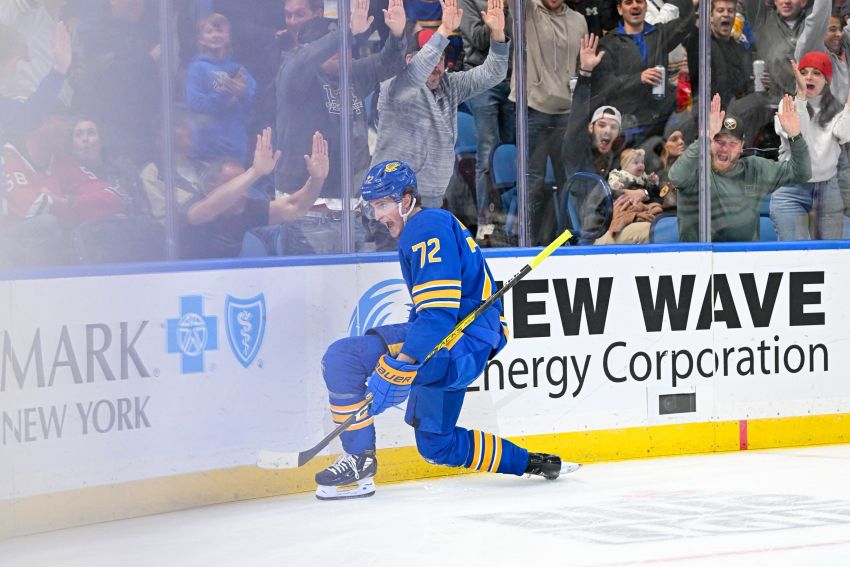 Thompson, fresh off a breakout 38-goal season, admittedly demands a lot from himself. After scoring just once in the first seven games, he began feeling pressure to produce.

So Granato told Thompson, who turns 25 today, to stop trying to score the perfect goal and overthinking things. Just go out and play.

“You just have to just score just any way possible,” Granato said after winger Victor Olofsson’s power-play goal 36 seconds into overtime clinched the win over the Chicago Blackhawks.

The 6-foot-7 Thompson can produce highlight-reel goals, but in scoring twice in just under five minutes to erase a two-goal, third-period deficit, he got gritty.

“Most goals are scored off of rebounds and fight for space net front,” Granato said. “That was both his goals tonight, getting there. … So you score or you can score more. That’s the way to score more, and credit to Tommer tonight, he was very aggressive when we needed him.”

Thompson scored in front of the net at 11:55, burying captain Kyle Okposo’s rebound. Then Thompson tied the game at 16:47, knocking winger Jeff Skinner’s pass out of the air at the crease.

Those were two of eight shots Thompson pumped on Arvid Soderblom at KeyBank Center. He also had the Chicago goalie beaten in the second period but hit the post on a one-timer.

Thompson felt he was getting closer to breaking out. For example, in Thursday’s 3-2 loss to the Montreal Canadiens, he registered eight shots.

They started going in after Granato switched all his lines and defense pairings. Most notably, he moved Alex Tuch from on the top line with Thompson and Skinner to right wing beside center Dylan Cozens and Peyton Krebs.

Meanwhile, Okposo moved up from the fourth trio beside Thompson and Skinner.

Perhaps helping ignite the comeback will buoy Okposo and Skinner. They each assisted on both of Thompson’s goals.

“Several times we had created some extra time and space and we tried to score pretty, and Kyle’s decisive,” Granato said. “I think him jumping on that line with Tommer, I think Skinny was really good. I thought into what we communicated, just getting pucks to the net, and heck of a job all three of those guys in third period.”

Olofsson also opened the scoring on the power play 6:19 into the game. Eight seconds earlier, an offside review negated his goal.

Just eight games into the season, the Swede already has three two-goal outings.

The Blackhawks left Olofsson, whose quick release makes him downright lethal on the man advantage, open on both goals.

On the overtime winner, defenseman Rasmus Dahlin found him in the right circle.

“I had a good, good chance right before,” Olofsson said. “I shot it right off (Jake) McCabe there and I knew Ras was going to find me again.”

Granato said: “He didn’t let us down. What a shot.”

Early in the game, Olofsson scored from the slot after center Casey Mittelstadt won the faceoff.

The Sabres beat the Blackhawks despite being down three of their top defensemen.

Ilya Lyubushkin, who missed one game after blocking a shot Oct. 18, was scratched after participating in the morning skate.

Defenseman Lawrence Pilut was expected to sit but played his third straight contest.

“We just felt the aggravation that he’s going through it’s time to, it’s better off (to sit him),” Granato said of Lyubushkin. “We thought it would progress through that. It hasn’t, but we feel that giving him a little bit of time off should remedy sooner than later.”

Notes: The Sabres registered 45 shots for the second straight game. … Sabres goalie Craig Anderson made 23 saves. … Jason Dickinson, Sam Lafferty and Taylor Raddysh scored for Chicago. … The crowd of 14,547 fans was the Sabres’ second-largest this season.