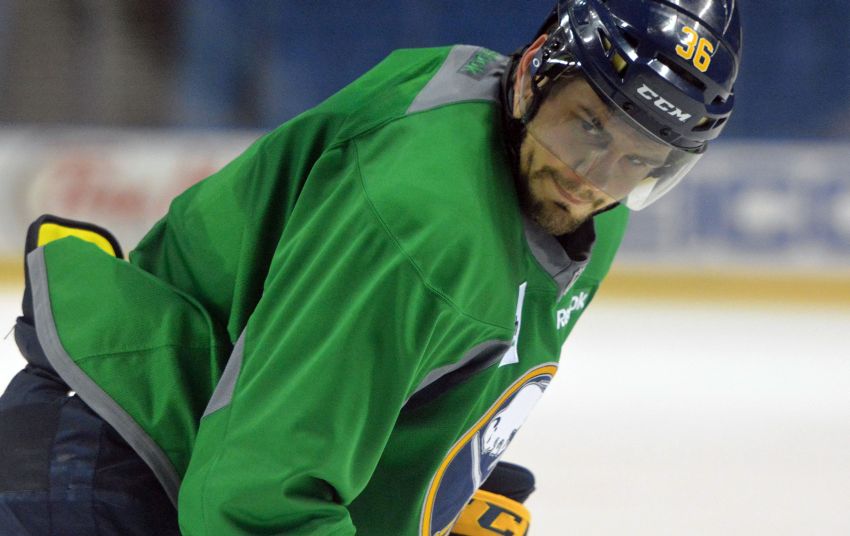 The Angola native lives his childhood dream every day.

But Kaleta knows his long Sabres career could be over soon. The oft-injured winger’s three-year contract, a deal under which he has played only 72 games, is expiring. The rebuilding team’s new regime isn’t tied to the aggressive agitator.

The Sabres might pass on re-signing a 28-year-old with a long history of injuries.

“You never know what anything’s going to bring,” Kaleta said about his uncertain future Tuesday after skating with some teammates inside the First Niagara Center. “But my job is to come in here and enjoy the time, the rest of the season, try to come in with energy, enthusiasm, try to play my game.

“I think I’ve proved the last nine years what I bring to a team and that sort of thing. I love this team, and I hope I can play for years to come. That’s my goal.”

Can Kaleta imagine wearing colors other than blue and gold?

“I can’t really,” he said. “So my goal is to be here, stay here, help out with whatever the plan is, whether it’s helping the young guys or doing whatever I can to help.”

Kaleta could return from an 18-game absence Thursday. He had a bone chip removed from his knee last month, a problem related to the torn ACL he suffered last season. He also broke his face blocking a shot during a Sept. 28 preseason game, shelving him until Nov. 13.

He has played only 33 games this season.

“I have a real tough time watching the team and not being able to participate and go out there and do what I do for the team,” Kaleta said.

The clock’s ticking on the longest-tenured Sabre. Kaleta has nine games to showcase his talents and make an impression.

“I’m just pumped,” he said about returning. “My injuries and stuff like that, I’ve been through a lot this past, I’d say, two years. I know a lot of people with where we’re at this year would be like, ‘Why is he excited to get back in there?’ The passion and stuff I have for this team, I’d do anything to get back.

“I know it’s crucial for me to come back and play these last couple games, because as of right now, I don’t have a job next year. I got to work toward finding one.”

Of course, injuries accompany Kaleta’s rugged style. He believes he wouldn’t be doing his job if he went through a whole season without getting some bumps and bruises or getting hurt.

Still, Kaleta thinks he has evolved and learned from his past.

“There’s a point where you have to learn from some things,” Kaleta said. “I don’t need to get into details with that stuff. I go out there, I’ve had four hand surgeries. I broke my whole face. I’ve done a lot of stuff. A lot of players could just kind of hang it up and get into the summer, see where it goes. But I’m not just that type of guy.

“If I come back and – knock on wood – need to block a shot with whatever part of my body I need to or sacrifice my body for the team, then I’m going to do it.”

These days, Kaleta thinks he plays a calmer style.

“So far, the games I’ve played this year, I’ve done a great job of it,” he said. “You’ll get critics saying, ‘Oh, he’s always hurt,’ or, ‘He hasn’t scored a goal this year.’ But the people who know hockey and really watch hockey understand it, they know what I can bring to the table and what I can do.”

Kaleta hasn’t lost faith in himself or the Sabres.