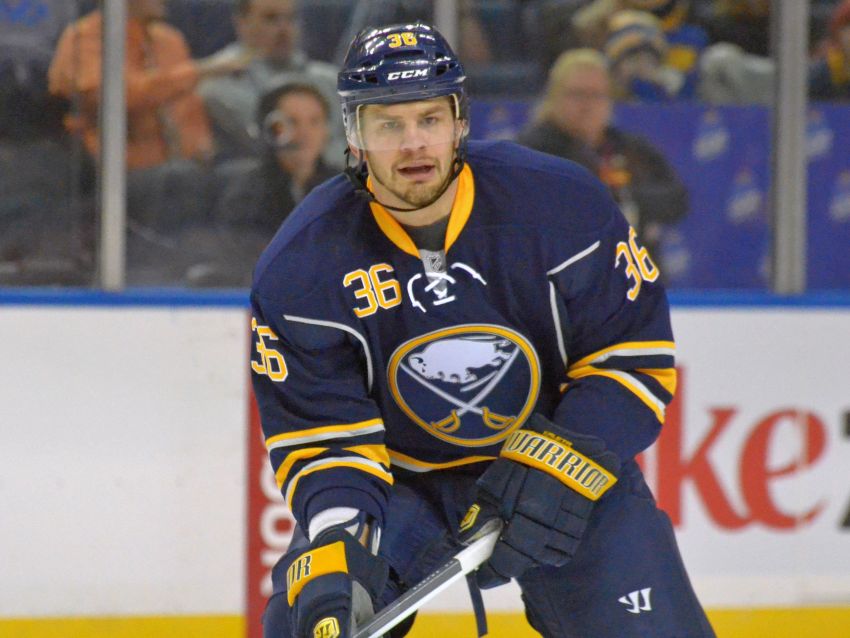 BUFFALO – For the last “crazy” little while, Patrick Kaleta said, when fans spot him around town, they greet the former Sabres agitator with the same questions.

“People see me, they say, ‘What are you doing here? Your team is practicing. Your team is playing,’” Kaleta told the Times Herald on Monday.

The affable Kaleta, who played 348 games with the Sabres, said he smiles and tells them he has a new job with the team off the ice.

“I just kind of … explain what I’m going to be doing for the team and stuff, and then after they sort of realize that I’m working and not playing as of this minute,” Kaleta said. “They thank me for everything I’ve done and making Buffalo proud and that sort of thing.”

Kaleta, 30, recently accepted what he said is a “hybrid” gig “where I can get my feet wet.” The Sabres call Kaleta the team’s “youth hockey ambassador.”

Given Kaleta’s local roots and the pride he took in playing for the Sabres, a job with the team seems like a natural fit.

“I’ll be doing a lot with the youth hockey and working specifically with PR and doing some events for the Sabres,” the Angola native said.

Kaleta’s main role, according to the Sabres, is “implementing and managing” the team’s Learn to Play Program, which provides first-time participants from ages 4 to 8 with free hockey equipment and instruction. Kaleta also serves as a liaison to the local high school hockey community and helps at the Academy of Hockey at HarborCenter.

“If you’ve seen how I’ve tackled my other jobs, I’m passionate about hockey in the area and especially the Sabres organization,” Kaleta said. “It’s pretty cool for me to be a part of this and see the other side of the sport.”

But is Kaleta done playing? Not necessarily. The winger spent last season with the Rochester Americans. He last played for the Sabres in 2014-15.

Kaleta switched agents earlier this year and said he wanted to latch on with an NHL team, perhaps as a 13th forward.

“We’re not going to tackle that area of my life right now,” he said about playing again. “There’s still a little bit of uncertainty with that area. As of right now, we’re just going to focus on what I’m going to be doing for the organization.”

If the Sabres were participating in the playoffs right now, then, yes, Ryan O’Reilly would be playing. But the center wants to be smart handling his recovery from an oblique injury.

That means O’Reilly, who skated with his teammates Monday morning prior to the Sabres’ 4-2 win against the Calgary Flames, sat out his fifth straight game and for the sixth time in seven contests.

“If it was the playoffs, it would be a different situation,” a sweaty O’Reilly said after leaving the KeyBank Center ice long after his teammates. “There’s a lot of hockey left.”

Bylsma said center Jack Eichel, out since sustaining a high left ankle sprain Oct. 12, has skated seven times and is progressing. Bylsma said Eichel “ramped up” his skating to a “third level.”

While Bylsma wouldn’t comment – he basically made a face – he appeared to briefly bench Rasmus Ristolainen on the power play until the defenseman, who has been breaking sticks almost every game, switched sticks. Ristolainen broke another stick Monday.

Former Sabres goalie Chad Johnson backed up Brian Elliott on Monday. Johnson, who played 45 games with the Sabres in 2015-16, is 5-3-1 with a 2.31 goals-against average and a .911 save percentage in nine games with his hometown Flames this season.

Notes: The Sabres are 17-3-2 in their last 22 home games against the Flames, who last won in Buffalo in regulation on March 15, 1996 at Memorial Auditorium. … Winger Kyle Okposo’s power-play goal was the Sabres’ first five-on-three score since Nikita Zadorov’s goal Feb. 15, 2015. … Matt Moulson’s sixth power-play goal tied him with Montreal’s Shea Weber for the NHL lead.