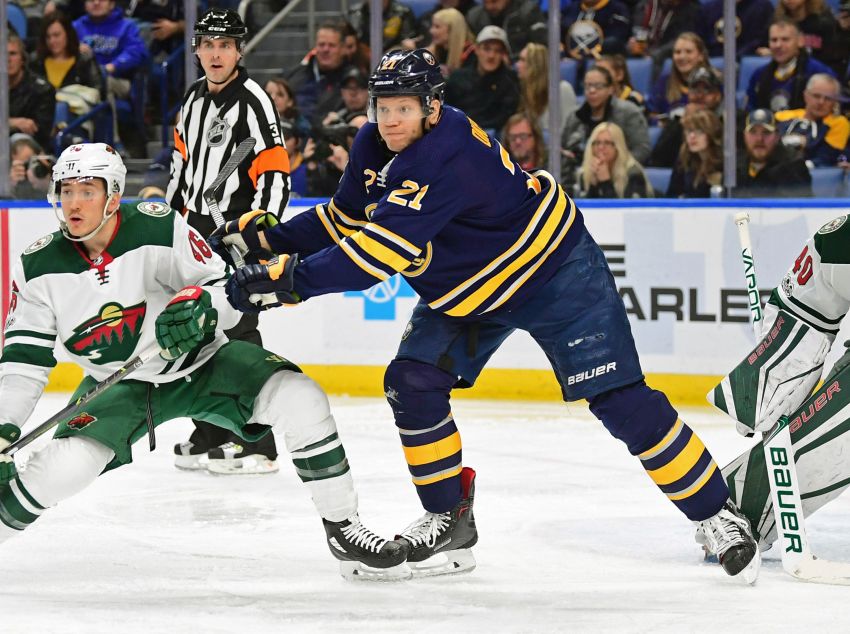 BUFFALO – Kyle Okposo looked glum, like a man searching for answers. The Sabres’ struggles have clearly worn on the winger, who hasn’t showcased his normal scoring prowess all season.

“It’s not very much fun to be at the rink right now, and that’s never a good feeling,” Okposo said Thursday. “We just feel like we’re letting a lot of people down and just have to make some changes. As a group, we have to come together as a team and just really buy in, otherwise it’s going to be a miserable year.”

Some would say the year became miserable weeks ago. The Sabres are a mess, owners of a seven-game losing streak (0-5-2) entering tonight’s tilt against superstar Connor McDavid and the Edmonton Oilers at KeyBank Center.

With only 14 points (5-13-4), the Sabres rank last in the Eastern Conference and 30th overall, just one point ahead of the hapless Arizona Coyotes. Not surprisingly, the Sabres have the NHL’s second-worst offense, defense and power play.

Why can’t the Sabres buy in and get on the same page?

“I don’t have an answer for you,” said Okposo, who has two goals and nine points in 20 games. “Things don’t go well in a game, I think that we just kind of push the game plan aside and then try to go on our own page right now, and it’s not working.”

The Sabres might follow the game plan for a bit. In Thursday’s game, they opened the scoring before imploding and falling behind 3-1 before the first period ended.

They seem to panic whenever adversity hits them.

“Bad bounces happen in a game, we kind of deviate,” Sabres center Ryan O’Reilly said. “I don’t know if we’re not mentally strong enough, but we deviate and it kills us. It’s a focus, we all have to stick to our job within a system and push other guys to stick to it to.”

Yes, pushing other guys. After scoring two goals Wednesday, winger Jordan Nolan said the Sabres lack accountability. In Los Angeles, where Nolan won two Stanley Cups, players drove each other to be better and called out bad habits and mistakes. In Buffalo, however, that doesn’t happen.

When Okposo broke into the NHL almost 10 years ago, New York Islanders veterans got on youngsters.

“When I first came in the league, I just kind of stuck to myself and tried to follow the veteran guys, and if I did something that was wrong or not the right way, (I) had Bill Guerin or Doug Weight or Brendan Witt saying, ‘Hey kid, do this, you can’t do that here, you can’t do that in this league,’” Okposo said. “It seems like it’s just gotten away from that a little bit. Maybe that’s my fault.”

Okposo said he tried to “get some accountability” in the dressing room before he suffered a season-ending concussion last March. The Sabres lost four of their last five games without Okposo, whose leadership was missed.

“We need more of it,” Okposo said of accountability.

“After that many losses in a row, it’s tough to try to keep that positive attitude, that positive energy in the room,” Reinhart said. “We got to find ways to highlight our little successes throughout games that leads to more and more positivity.”

“We feel like we have a good enough team here to win hockey games,” Okposo said. “We do it some of the time, but you know what that is in this league? That’s a bad team. That’s a team that’s not going to win.

“If you do it some of the time, you’re not going to win, no matter what. We have to do it all the time, otherwise we’re going to lose.”

Notes: O’Reilly on the Sabres’ post-game meeting Wednesday: “It was a good reflection meeting. I feel, to a man, everyone knows a little bit more what we need to do and how to change.” … The Sabres had an optional practice Thursday. … The Oilers, a chic Stanley Cup pick after reaching the second round of the playoffs last season, are probably the NHL’s biggest disappointment this season. With only 18 points (8-12-2), they rank seventh in the Pacific Division. … The Sabres close a four-game home stand tonight.

One thought on “Losing streak leaves Sabres searching for answers”