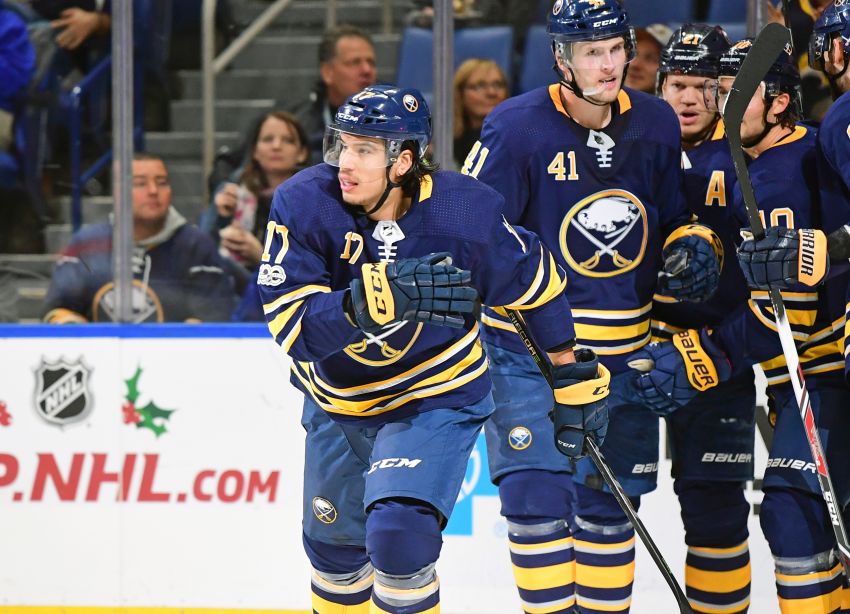 BUFFALO – Jordan Nolan grew up in a winning culture. The Sabres winger won two Stanley Cups in his first three seasons with the Los Angeles Kings.

To Nolan, the Kings’ accountability helped buoy their success. If you made a mistake or needed a push, someone would tell you.

“If I made a mistake in my fifth year, a higher guy was telling me, ‘You need to work harder, you need to get that puck in,’” Nolan said after scoring two goals in Wednesday’s 5-4 loss to the Minnesota Wild. “Or Jeff Carter told me a few times when I was younger that I need to work harder or my shifts are too long.”

Nolan, a waiver claim during the preseason, sees none of that on the reeling Sabres, who have lost seven straight games (0-5-2).

“We just have to start holding guys accountable, start being honest with ourselves and our teammates,” Nolan said.

Twenty-two games into the season, the Sabres have completely fallen apart. A season expected to be filled with excitement and progress has turned into another dud. Right now, they might be the NHL’s worst team.

Housley, who often accentuates any positives, spoke critically of his team. His answers became more terse as the news conference went on.

After center Jack Eichel opened the scoring 6:55 into the contest, the Wild roared back with three unanswered goals before the crowd of 17,428 inside KeyBank Center.

“It’s a game of mistakes, and it’s decisions and choices at the wrong time of the game,” Housley said. “We get the first goal, all we have to do is continue to stay the course.

What did Housley want to see Wednesday?

“I don’t feel everybody’s on the same page. I think guys are taking things into their own hands and this is the result we’re getting.”

The Sabres, as they often do, battled back, getting to within one goal twice. In the waning seconds, winger Kyle Okposo nearly tied it in close.

Still, that offered only a little consolation for Housley.

“They got to make a decision internally about playing the right way, because right now we’re chasing games,” he said. “I really like the fight that we had until the end.”

Housley wouldn’t comment on what Nolan said about accountability, only saying, “What they talk about in the locker room is their own personal things.”

But Housley, a Hall of Fame defenseman, probably knows accountability’s lacking among his players.

Sabres center Ryan O’Reilly said he usually focuses on his own game when he’s struggling.

“We’re in this together, we’re one group, we’re one team,” he said. “We have to all find a way to help each other out. Even if I’m not at my best, I still have to push someone to be their best and he’ll push me to be my best.”

Chad Johnson wasn’t at his best – the Sabres goalie allowed three early goals, including a weak one to former teammate Tyler Ennis – so Housley yanked him after the first period.

Johnson said: “We’re not in a situation where we can let in three goals in a game, let alone a period.”

Why did Housley start Johnson, the backup, over Robin Lehner?

“We’re losing games,” Housley said. “We have to make some decisions.”

Nolan’s goals were his first with his new team. Winger Sam Reinhart scored the Sabres’ other goal.