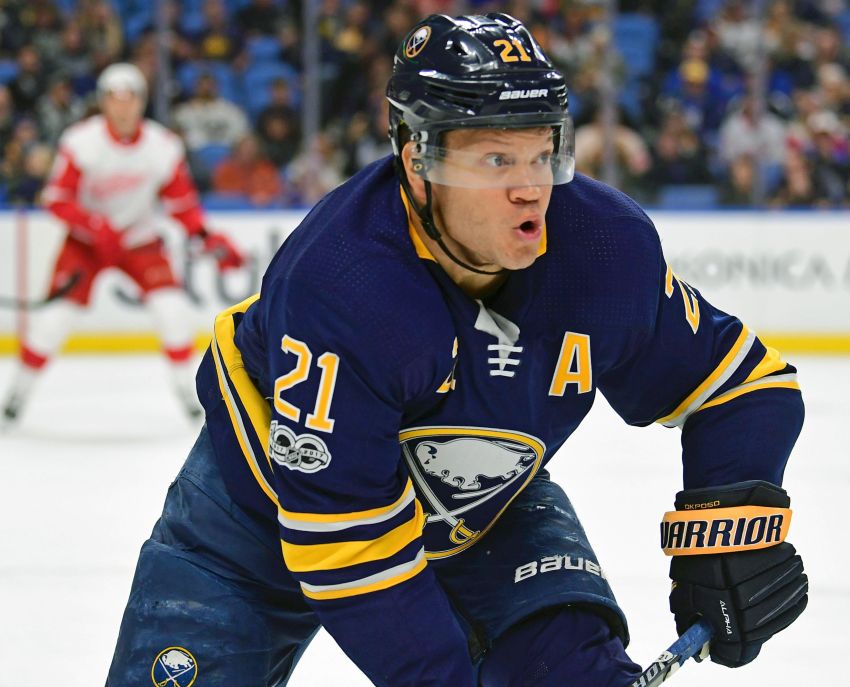 BUFFALO – In good and bad times, Kyle Okposo tries to evaluate his game objectively. Of course, assessing yourself can be difficult, even emotional, but the Sabres winger believes he’s honest with himself.

“I expect a lot out of myself,” Okposo said Tuesday inside KeyBank Center. “I expect more. I expect myself to be at my best all the time. Is it going to happen? No. But you have to expect greatness and can’t settle for mediocrity.”

Okposo, 29, has struggled most of this season, quickly becoming the Sabres’ biggest disappointment. Incredibly, Okposo, who has averaged 22 goals and 55 points in his last five full seasons, has zero goals and just two assists in 10 games.

Last season, Okposo’s first year here, he compiled 19 goals and 45 points in 65 contests before a season-ending concussion left him hospitalized in intensive care. Okposo has said he feels healthy.

Naturally, Okposo’s wretched start has taken a toll on him. In the dressing room following games and practices, he has often been reflective and visibly frustrated.

“He’s a veteran guy that realizes how important he is to our team and evaluates himself to a point sometimes where he’s a little bit too hard on himself,” Sabres coach Phil Housley said.

But Okposo knows the Sabres probably wouldn’t be 3-7-2 if he had performed like his regular self.

Slowly, Okposo has been showcasing signs of breaking out of his slump. Since Housley benched him for most of the third period in a 4-2 home loss Oct. 20 to Vancouver, he has been more noticeable, generating scoring chances.

The night after Housley’s strong message, Okposo responded in the Sabres’ roaring 5-4 overtime win in Boston, looking more engaged. He hit the crossbar in the waning seconds of regulation, nearly clinching the game.

“If you look at the Boston game, it’s all about work, playing a 200-foot game, I think he’s got to continue to do that if he’s going to be effective,” Housley said.

Since the benching, Okposo’s ice time has gone from less than 10 minutes to about 19 an outing, his regular number.

Okposo tries to be proactive with his slumps. When he was enduring a miserable, career-worst season in 2012-13 – he scored just one goal in his first 20 games of the lockout-shortened campaign – he started working with Darryl Belfry, a noted performance coach.

Okposo said he spoke to Belfry, who sometimes reviews video clips, on Monday.

“He’s watched me play pretty much every game for the last five years, so he knows what makes me tick, he knows when I’m going, what my game is like,” said Okposo, who’s in the second season of a seven-year, $42 million contract. “So he’s definitely helped me over the last five games, just to try to put some thoughts in.”

Okposo tries to leave his hockey thoughts at the rink, which is harder during a rough stretch.

“When I go home, I try never to bring my work home,” he said. “That’s one thing I’ve learned over the years. When I was younger, I definitely did it a lot. My wife suffered the brunt of it, and that’s something I’ve vowed never to do.

“I try to do it as little as possible when I get home. It’s all about family. That’s what’s most important to me at the end of the day, is being a good father and husband.”

For Okposo, his body of work over 10 seasons outweighs a bad 10-game stretch.

“One hundred percent it does,” he said. “But it’s still hard to think about that at the moment. You’re frustrated, you want to score, you want to produce, you want to keep helping your team win, especially when the team’s struggling. You want that on yourself. But (I) have to stick with what I know works and trust that it’s going to turn.”