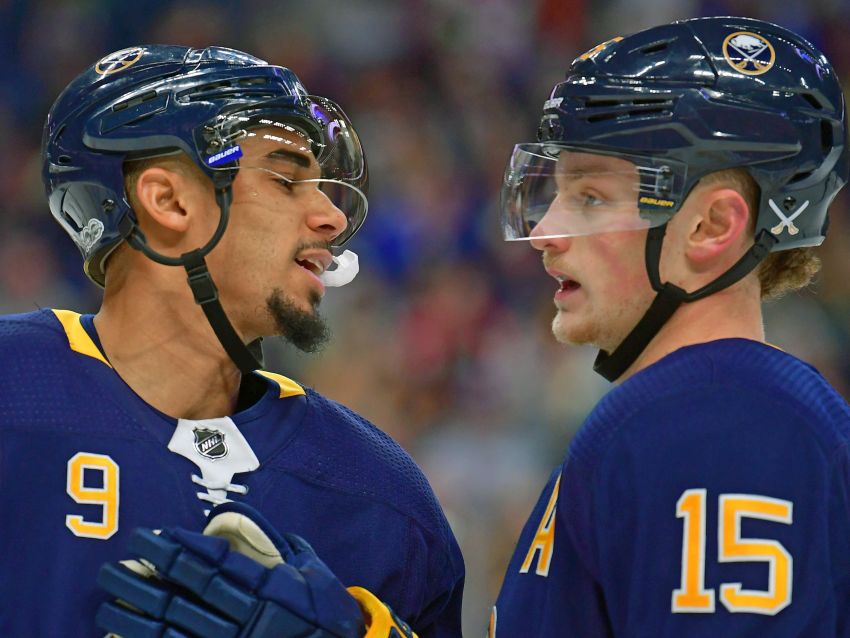 BUFFALO – In their first weeks as Sabres linemates, Jack Eichel, Evander Kane and Jason Pominville have quickly morphed into one of the NHL’s most lethal trios.

Each player has a team-leading 12 points. Kane and Pominville both have a team-high six goals, while Eichel, whose eight assists tops the Sabres, has four goals.

“They have a big impact on our team,” Sabres coach Phil Housley said Wednesday.

You think? The 3-7-2 Sabres, who open a two-game road trip tonight against the hapless Arizona Coyotes, have scored 29 goals as a team. Only seven other players have scored a goal, and just one, center Ryan O’Reilly, has more than two.

“When they’re going, our team’s going,” Housley said inside HarborCenter. “I’d like to find a little more support in that area, especially from the rest of the lines. But I think it’s just they’re feeding off each other, they make plays, they’re creating scoring chances, and right now, they have good chemistry.”

Why have they worked so well together?

“Just reading off each other,” Pominville said. “We have different styles, but we’re able to jell well together. Jack’s a great skater, sees the play really well, can handle the puck and make plays. I like to shoot, Kaner likes to shoot. Kaner’s a big boy, protects the puck well. I think we mesh well together.”

While Housley has periodically broken up the No. 1 line, he always puts the slick forwards back together.

In Saturday afternoon’ 3-2 loss to the San Jose Sharks, Eichel and Kane assisted on Pominville’s 191st goal with the Sabres, which briefly put them up 2-1.

“We’ve been able to find a way to produce pretty consistently, which is good,” Eichel said.

Eichel, however, is adamant the line can be better. He seemed surprised Tuesday when a reporter suggested the line was “ticking,” replying, “You think we’ve been ticking?”

“We’ve had some chances, I think we need to capitalize better on them, myself included,” he said. “I’d like to see us be more consistent on a shift-to-shift basis of getting that sustained pressure in the offensive zone, continuing to successfully make our plays that we’re trying to make.

“It takes time. You don’t build chemistry overnight. You don’t build it over a course of a week. It takes a little bit to figure out somebody’s ins and outs of what they’re thinking on the ice. We’re just still trying to do that now.”

Kane said: “There’s been a lot of opportunities we’ve had that we haven’t capitalized on.”

Housley’s decision to put Pominville, 34, beside Eichel and Kane during the preseason was a bit surprising. When the Sabres brought back Pominville during the summer, it seemed like he would be slotted into a second- or third-line role.

But Pominville has performed strongly from the get-go, looking like a player still in his prime.

“He’s got good finishing ability, for sure,” Eichel said. “I think I already knew that before I got here being a fan of hockey, watching it, playing against him a couple times the last few years.”

“The angle at which it was coming down onto him, for him to one-time it like he did and get good wood on it, get it up off the ice, it’s an impressive shot,” he said.

But to Eichel, Pominville’s success at an age when most players are graying or retired is no fluke.

“He takes good care of himself,” he said. “He’s dialed in with the way he takes care of his body. He does a lot of things, it reminds me of (former Sabres captain Brian Gionta), with the way that Gio would prepare each game and for each practice. (Pominville’s) definitely a pro. I think it’s a lot of similarities, and it’s a compliment to the two of them, the longevity of their careers, the continued success they’ve had.

“You have to credit something, look no further than themselves. Pommer’s the same way. He attacks every day, every game the same way.”