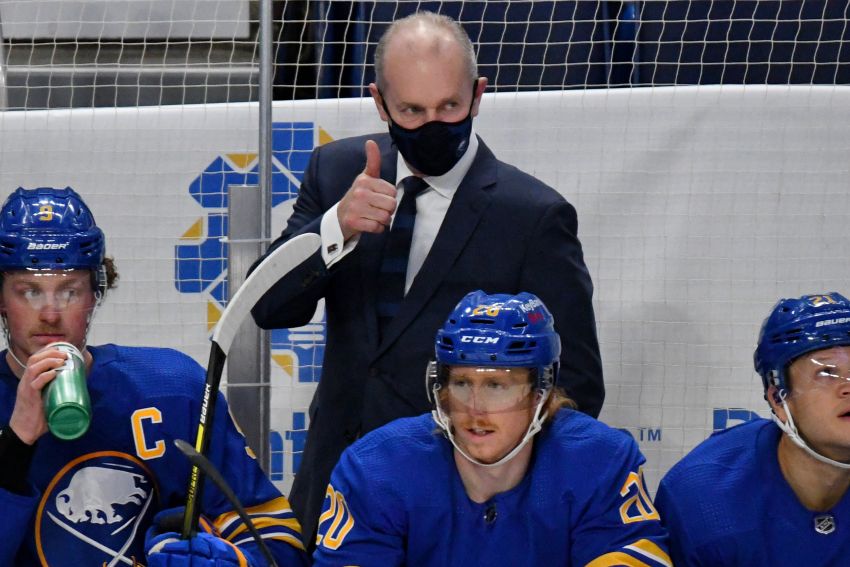 Adams, a rookie GM who inherited his coach, likes Krueger and clearly wants to fire him only as a last resort.

“Everything is being evaluated,” Adams said on a Zoom call Friday afternoon to discuss the Sabres’ sorry state. “Ralph and I talk every day, multiple times a day. We’re very honest with each other. He understands the situation we’re in is unacceptable and the players do, everybody does. It’s just flat out not good enough.”

Krueger might need to win a game this weekend against the New York Islanders to save his job. The Sabres play this afternoon and Sunday afternoon at Nassau Coliseum.

The Sabres have lost five straight contests and nine of 11 since their COVID-19 pause ended, plummeting to dead last in the NHL. They possess a feeble offense, don’t defend well and often showcase little passion.

Blame can be laid everywhere for their myriad problems. Adams did not add enough grit, so Krueger has a soft team. Nearly every player is underperforming. Jack Eichel, Taylor Hall and Jeff Skinner, whose combined salary cap hit is $27 million, have scored four total goals.

But as coach, fair or not, Krueger will shoulder most of the criticism.

“There’s good people in there and they communicate well with the coaches, and the players enjoy playing for Ralph and the coaching staff,” Adams said. “There’s a belief in that locker room. So that’s something that I have to balance. But … it hasn’t been good enough. It hasn’t worked. And it needs to.”

Adams sounded embarrassed by the Sabres’ woes and said he was “angry.” Before the Clarence native fielded any questions, he said he was “going to speak from the heart.”

“I’m not happy,” he said. “Unacceptable where we’re at right now. Part of my job is to raise the standard, the expectations and the accountability in this organization, and we’re not where we need to be. You’re not going to hear excuses. Just going to be honest with you. It’s unacceptable.”

It’s one thing to lose; the Sabres are often going down meekly. Adams said their lack of competitiveness “in all areas of the ice” has become their biggest problem.

“We’ve shown pockets of it, we’ve shown glimpses at different times but not a consistent hunger and battle and competitiveness through the games,” he said. “To be honest with you … we give up too many Grade A scoring chances, which means we’re not hard enough in our defensive zone, and we’re not creating enough Grade A scoring chances in the offensive zone, which means we’re not hungry enough to get to the net and we’re not competing enough. That’s battle and will, right?”

When Adams took over, he said he spoke to the coaching staff and developed a feeling the Sabres “were a little closer than further from success based on some of the things that happened last year.”

“I took a view of a short-, medium- and long-term approach,” he said. “The short-term was, ‘OK, how do we make this team competitive and fight to where this team needs to be right now? How do we win right now? And how do we do it responsibly in making the right decisions and not mortgaging the future and all those types of things?’”

“The people that were brought in are high-character people,” he said. “Our special teams have been good and five-on-five scoring hasn’t, period. It’s great to have character and it’s great to have people care about each other and like each other, but it has to translate to on-ice success.”

So far, other than recalling some players, Adams has made zero in-season moves.

“I’m waking up every day looking for solutions,” he said. “It’s an interesting time right now. I’m on the phone every day with all the different teams around the league and everybody’s having conversations. …

“But … we’re not going to be reactionary. My job is to take the emotion at times out and figure out solutions to improve. Sometimes that means short term, sometimes that might be for the longer term. That’s what we’re working on.”

At some point, Adams could simply focus on the long-term picture. The trade deadline is April 12.

“You owe it to the organization and the fans and the players to make sure that we’re doing everything we can to put ourselves in a position to have success and have success today, and all of that stuff,” he said. “But you are constantly balancing the reality of where we’re at and where we’re at is the bottom of the league. We can’t hide from that. You have to have the conversation and be honest.”