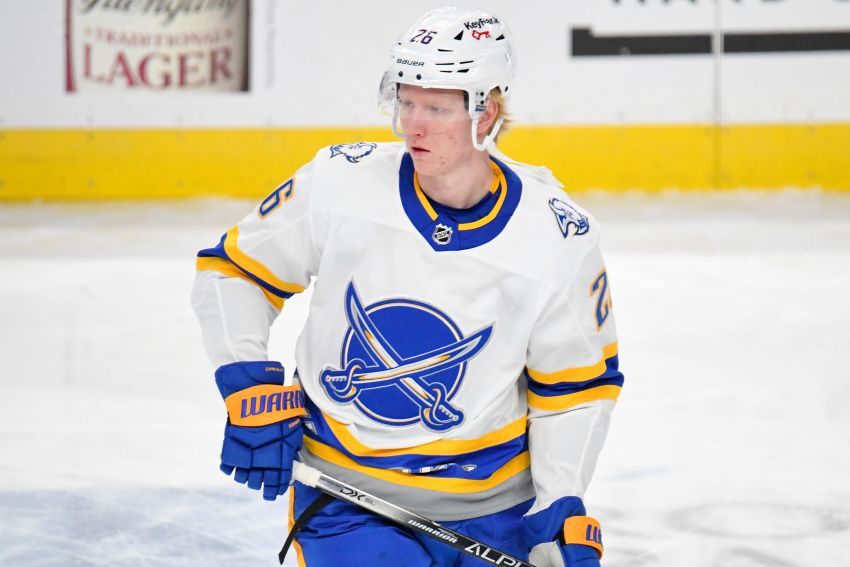 Rasmus Dahlin has an NHL-worst minus-21 rating. ©2021, Micheline Veluvolu

Those brilliant rushes Buffalo Sabres defenseman Rasmus Dahlin showcased as a teenager – he would grab the puck and start controlling the game, dazzling all over the ice with it – have become a rare occurrence.

These days, Dahlin, 20, never seems to have the puck on his stick. The Swede has struggled most of this season, often looking overwhelmed defensively.

Through 23 games, Dahlin is the NHL’s clubhouse leader, sporting a ghastly, league-worst minus-21 rating.

In Thursday’s 5-2 loss to the New York Islanders, he endured perhaps the worst outing of his 164-game career, compiling a wretched minus-4 mark.

Dahlin, who puts a lot of pressure on himself, looks and sounds beaten down by his struggles and the Sabres’ sorry state. They’ve lost seven straight games and rank last in the NHL entering tonight’s contest against the Philadelphia Flyers, the finale of their five-game road trip.

“I don’t think he cares too much about the outside pressure,” said Ristolainen, who played three games beside Dahlin last week.

Dahlin, the first overall pick in 2018, looks like he has regressed in his third season. Other than some adroit passing, he has mostly stood out for his defensive mistakes.

In Sunday afternoon’s 5-2 loss to the Islanders, he registered a plus-1, his first positive rating since Jan. 18 and just his second this season.

“This league, it’s the best league in the world and it’s tough for any young player, even a player of his skill set – and, I mean, he is one of the top players in the game with the puck,” Sabres general manager Kevyn Adams said. “Offensive or defenseman, it doesn’t matter, he’s that talented of a kid. So it’s tough. You’re going to have your ups and downs.

“But I’ve seen him do some incredible things. You worry about if a player’s not having success, does it affect their confidence? Of course, right?”

But Dahlin, given his hesitancy to rush the puck and move up in the play, has clearly lost some confidence. Krueger benched him once this season, playing him just one 72-second shift over the final 32 minutes on Jan. 22.

“I see a player whose development is stalled,” said one scout who has watched Dahlin throughout his career. “Early in his career he showed flashes of brilliance and skill with the puck controlling the play not only on the power play but also five-on-five. For some reason those flashes are few and far between now except on the power play. …

“He is not handling puck as much five-on-five, struggling with turnovers, and therefore is hurting the team more than helping because he is not controlling the play.”

When the 6-foot-3, 207-pound Dahlin spends more time defending, his deficiencies stand out.

“He is not a strong defender or a hard guy to play against to begin with,” the scout said. “Every young offensive defender needs to work on his defensive game but he needs to have the leeway somewhat to play to his strengths.”

Krueger said without the puck, Dahlin has been learning to manage his energy and “pick his spots to jump into the offense.”

“When you’re playing 17, 18 minutes, there’s more freedom to jump in all the time and he now needs to be more selective when he does get involved offensively and he’s getting better at that, too,” he said.

Krueger said assistant coach Steve Smith has worked closely with Dahlin “as far as growing and evolving the game without the puck.”

“The defensive side of the role that he would need to be able to take on to play those minutes,” he said. “We just really like the process with him right now. He is very accountable. If something’s off or goes wrong, he’s processing it well. He loves the video sessions and his offense remains genius, his first pass remains genius, and he adds so much to our transition game.”

The Sabres, who have lost 11 of their 13 games since their COVID-19 pause ended, did not practice Monday.

5 thoughts on “Why is Sabres’ Rasmus Dahlin playing so poorly this season?”