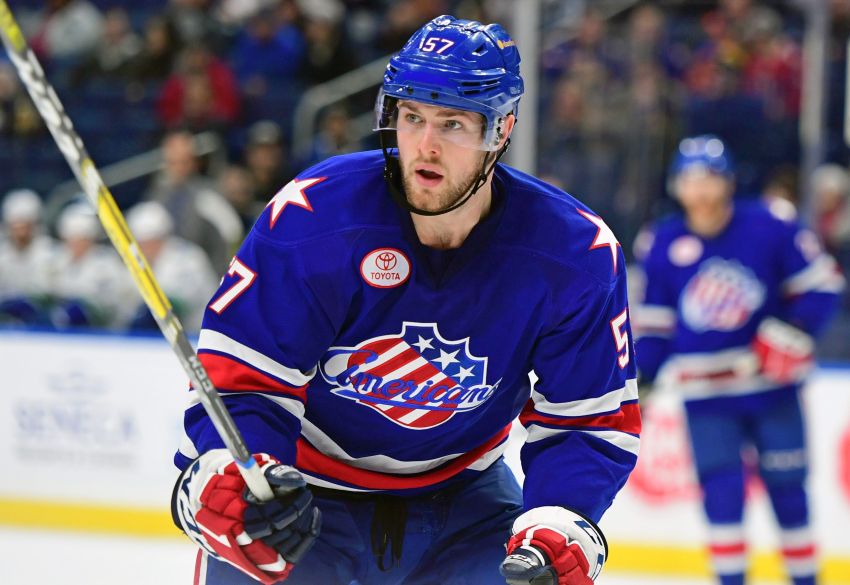 BUFFALO – For the second time this week, the Sabres have recalled Brady Austin from the Rochester Americans. Days ago, the defenseman was an unknown prospect, a former seventh-round pick 200 games into his pro career.

“Stepping into Detroit (on Monday) and playing the way he did there, you really wanted to see what he could do there, his size,” Sabres coach Dan Bylsma said. “He’s got the ability to play a tougher game, a physical game and stepped right in in Detroit.

“It’s kind of a different flavor putting your D-pairs together and your lines together with an influx of four guys,” Bylsma said.

Sabres goalie Robin Lehner will start, his 54th appearance this season. It appears wingers Nick Deslauriers and Hudson Fasching will be scratched.

Update: Fasching has been sent to the Rochester Americans.

The upstart Leafs, having won three straight games and seven of nine, are scorching. With 85 points, 13 more than the Sabres, they’ve vaulted into third place in the Atlantic Division.

Remember, the Sabres were supposed to be ahead of the Leafs in their rebuild.

The Leafs have historically struggled in Buffalo, winning just 28 of their 102 games here. Still, they won 2-1 in their last visit Nov. 3.

Some more notes on tonight’s game:

With Ristolainen out, look for the Sabres to use five forwards on their power play, which ranks second overall, trailing only the Leafs.

It appears top center Ryan O’Reilly will move back.

“You need to have a special guy on top to do it, a guy who’s comfortable there, responsible,” Bylsma said.

Leafs rookie William Nylander, who has a 10-game point streak, on his brother, Sabres prospect Alexander Nylander, an AHL rookie: “He’s learning. It’s a little different league, so … it takes some time to get going there. It’s been going a little up and down.”

Alexander Nylander, the eighth overall pick in 2016, has nine goals, 26 points and a minus-20 rating in 58 games with the Amerks. The winger had a 21-game goal drought earlier this season.