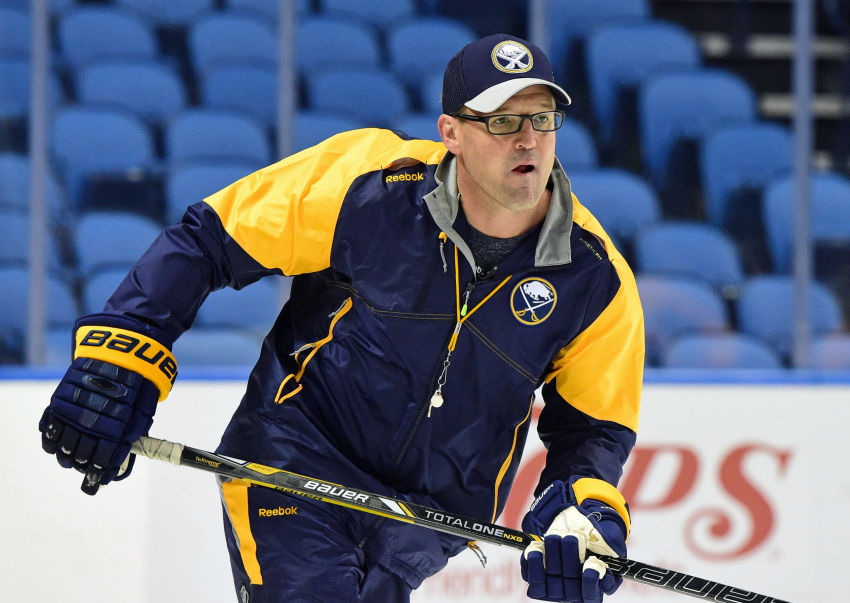 BUFFALO – The voice is so loud, Sabres coach Dan Bylsma keeps looking back on the ice and wondering who the heck is yelling.

“His voice is like his size, it’s big,” Bylsma said about 6-foot-5 goalie Robin Lehner, who will start Wednesday’s preseason home opener inside the First Niagara Center against his old team, the Ottawa Senators.

Lehner, as anyone who has watched a training camp practice quickly learned, loves to communicate on the ice.

“I try to be a third eye for the defenseman,” he said.

Bylsma has never been around a goalie who’s so vocal, something he’s still getting used to.

“It’s Robin all the time,” he said. “He’s engaged in talking to his defense and talking through the play.”

Lehner, who’s expected to be the No. 1 netminder, hasn’t played a game since a scary concussion ended his season Feb. 16. Slowly, he’s getting back to normal.

“There’s a few things left, but I feel like I’m kind of ahead of what my expectation was,” he said. “I feel pretty good.”

Playing against Ottawa, his team for five seasons, will be “a little weird,” Lehner said.

“But I’ve got to approach it as any other game,” he said.

The Sabres sent a 2015 first-rounder to the Senators for Lehner and center David Legwand on June 26.

By the way, Lehner likes his name to be pronounced “Lenner.”

In other news, rookie center Jack Eichel won’t play Wednesday, Bylsma said. The second overall pick had a short-handed goal and an assist in Monday’s 3-2 win in Minnesota.

“It makes you feel comfortable playing with Zemgus (Girgensons) and Matt (Moulson),” he said. “They make it pretty easy and are really good players. It’s exciting to be able to have a goal in your first game and kind of get that off your back. But I think it’s more exciting to win and get some confidence going as an organization and as a team.”

With a couple of exceptions, anyone who played Monday will sit against Ottawa.