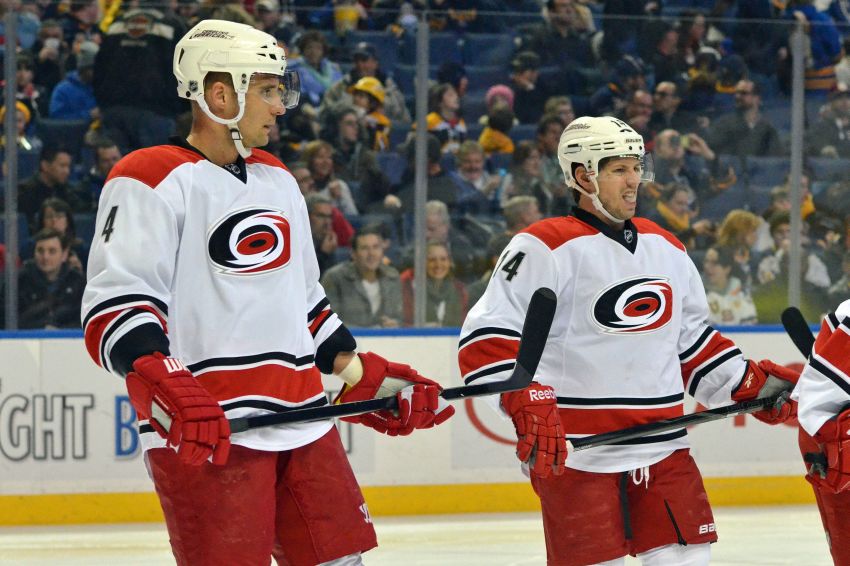 BUFFALO – At first, Nathan Gerbe said, he didn’t understand why the Sabres waived and bought him out in early July. The diminutive winger had no inkling they had given up on him after five seasons.

“I didn’t know it was coming, that’s for sure,” Gerbe said Thursday prior to the Carolina Hurricanes’ 5-3 win inside the First Niagara Center. “No one spoke to me about it. So I think you get a little shocked. But it’s a business and you just continue on.”

Three days earlier, at the NHL Entry Draft on June 30, the Sabres had traded defenseman Andrej Sekera to the Hurricanes for defenseman Jamie McBain and a second-round pick.

“One day you are here, the next day you are gone,” said Sekera, who scored the winning goal 9:50 into the third period and added two assists. “The good thing was I didn’t have any family here, stuff like that. It’s business. It was a good seven years here. There’s a new chapter in my life.”

Both players are thriving in Carolina and enjoying their new chapters.

“I’ve been able to just play and get my confidence back,” Gerbe said. “It’s an organization that’s shown a lot of faith in me. It means a lot to me. I want someone to believe in me and I want to show them that they’re right.”

The 27-year-old Sekera, meanwhile, has quietly become one of the NHL’s better defensemen, compiling eight goals and 28 points in 48 games while playing almost 24 minutes a night. The Slovakian’s already set a career high for goals and is one shy of his best point total.

“Change is sometimes good,” Sekera said. “I’m getting all the opportunities.”

Hurricanes coach Kirk Muller added: “It’s very possible he could be our MVP this year. From Day One he’s been our most consistent player. He’s had a very, very good year so far.”

Gerbe said he knew during their Buffalo days how good Sekera, a supreme puck-rusher, could become.

Maybe Gerbe wasn’t valued enough, either. He’s not bitter, however.

“I love it here in Carolina,” he said. “This has been awesome. The coaching staff I love. They’ve shown a lot of support for me, so I want to do the same for them.”

What drew Gerbe, who signed a two-way contract, to Carolina?

“Talking to Mr. Ron Francis, they seemed to really value me and want me here,” he said. “So I think that was an easy decision for me.”

Why couldn’t things work out with the Sabres?

“Not sure,” Gerbe said. “I just came in worked hard every day.”

He scored arguably the NHL’s most scintillating goal this season in Carolina’s 3-2 win Wednesday in Philadelphia, using a slick between-the-legs move on a breakaway to beat goalie Steve Mason.

“At this level, yeah, I would say it’s the coolest goal I’ve scored,” Gerbe said.

He added: “Guys were pretty excited and pumped.”

Sekera’s pumped to be representing Slovakia at the upcoming Sochi Games, his second Olympics.

“Still a couple weeks left. Hopefully, the health will be good,” he said as he knocked on his head.

“We talked today, when he goes to the net, he’s got to stop in front of that blue paint,” interim Sabres coach Ted Nolan said. “You go through it, especially a player of his nature, you’re going to get called for it all the time.”

Nolan joked the rookie’s not day-to-day but “hour-to-hour.” Pysyk could get sent to Rochester today so he’s eligible to play during the Olympic break.