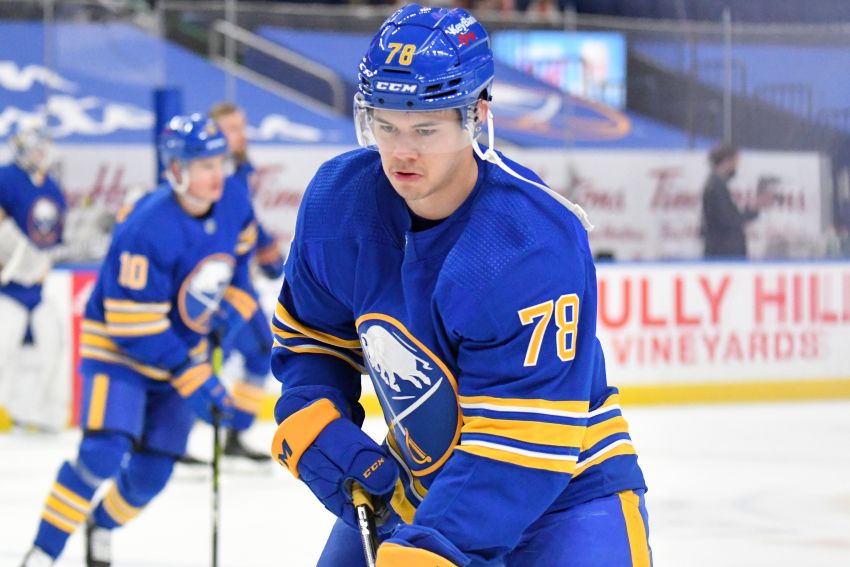 A month ago, the Buffalo Sabres were in the midst of an embarrassing 18-game winless skid, so finishing April with a 6-8-2 record illustrates their rapid improvement in barely four weeks.

Remember, the Sabres had trouble scoring a single goal most games in February and March. Now, they’ve morphed into a team capable of beating any of their heavyweight East Division opponents.

Of course, they’re not exactly a playoff-caliber team yet. But they’re clearly getting better.

In Thursday’s 5-2 loss to the Boston Bruins, they fell behind early and keep battling back before wilting late. A month or two ago, they would’ve blown out of TD Garden.

“It’s all about development,” interim Sabres coach Don Granato said on a Zoom call. “I keep saying it, we have to get better and so that is the push, to get better. Again, you compete every night to win. You lay a game plan, a strategy out to implement that targets the win. But you have to get better and we’ve seen that. Our players, there’s no question they feel that. It’s obvious when you work with them, they’re engaged in practices and meetings.

“I think every guy’s getting better and obviously collectively we’re getting better. When you do that and you keep getting better, everything eventually becomes easier. And we’re not at that point obviously yet, we’re still fighting and scratching and clawing, but it will turn if you keep going in that direction and we have to stay focused on that.”

Reinhart has scored six times in his four-game goal streak. He finished April with 10 goals and 15 points in 16 games.

“It’s always hard playing from behind, but we’re a young team, we’re learning, guys are getting a lot of experience,” Sabres winger Drake Caggiula said. “We believe we’re in the games.”

The Sabres have learned to handle the highs and lows of a game and plow ahead instead of becoming rattled.

“We’re much better focused in staying on our game plan, paying within our group, within our system for your linemate, your teammate,” Granato said.

Sabres defenseman Jacob Bryson said: “We played a lot better than what the score showed tonight. We lost by (three goals) but I think we played a full 60 minutes tonight. We were battling. Boston’s a tough team; that’s how they play, they play physical. I think we stood our ground.”

“There’s many portions here, lots and lots of chunks of that game, we were dictating against a damn good hockey team,” he said. “And we all know that, I mean, they’re a great hockey team. A lot of great players and accomplished players. There was a lot of that game that our guys initiated and were able to dictate flow of the game.”

The Sabres couldn’t, however, dictate the late stages of the game.

Charlie Coyle put the Bruins up 7:58 into the third period, capitalizing on a Reinhart turnover. Ex-Sabre Taylor Hall sealed the game at 16:43, burying a pass from Krejci after the Bruins center made Sabres defensemen Rasmus Dahlin and Henri Jokiharju look silly.

Sabres goalie Ukko-Pekka Luukkonen, who started back-to-back games for the first time, made 35 saves in his third NHL outing.