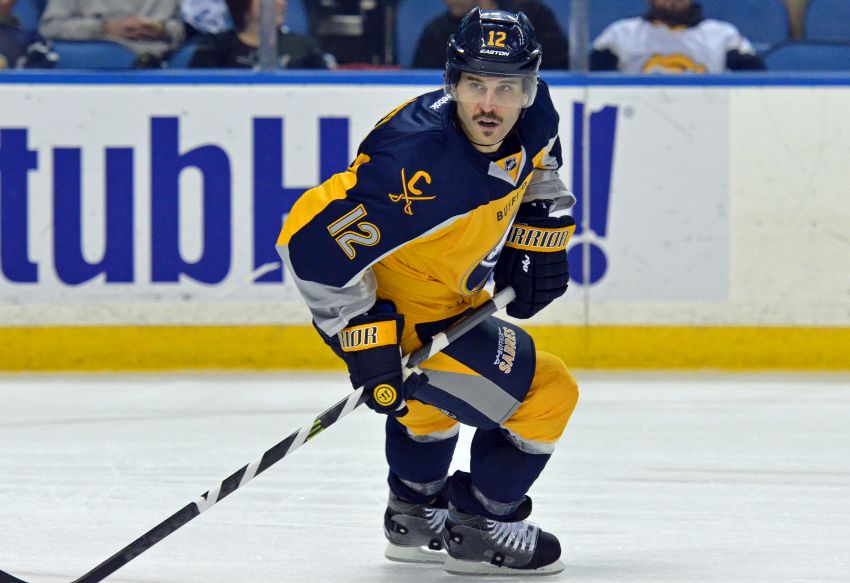 BUFFALO – Outside the First Niagara Center, temperatures dipped into the low 20s and winds gusted up to 30 mph Tuesday. It was bone-chilling cold.

But there was very little snow on the ground downtown. The area immediately around the arena remained navigable all day. So did Buffalo’s Northtowns.

Just miles away, however, an early-season storm was annihilating the Southtowns.

Five feet fell in some areas. There was chaos everywhere. No one could budge.

Still, the Sabres played on, beating the San Jose Sharks 4-1 before an estimated crowd of 6,200. Approximately 17,000 tickets were distributed.

So 13,000 fans missed an interesting contest.

Consider what transpired as the Sabres won consecutive games for the first time this season:

– Captain Brian Gionta scored his first two goals with the Sabres, including the winner 11:54 into the second period.

“I think everybody was really happy and kind of excited,” Sabres coach Ted Nolan said. “There was 21 smiles on the bench, for sure, when he scored that one.”

After his first score, Gionta yelled in excitement.

Neuvirth’s “a little bit more than day-to-day,” according to Nolan, so the Sabres will likely summon a goalie from Rochester soon. Neuvirth was hurt when teammate Tyler Ennis hit him.

With no other netminders around, Sabres goalie coach Arturs Irbe, a 47-year-old who last played in the NHL in 2003-04, signed a contract between periods.

He quickly put on some of Enroth’s equipment, a No. 35 jersey with his name and sat in the tunnel late.

Irbe was in the press box wearing a suit and bowtie during the first period.

Springing into action was easy for Irbe, a former NHL All-Star.

He added: “I was thinking how I would approach it if I had to go in.”

The organist played the national anthems. The on-ice action echoed throughout the arena.

“It was strange at the beginning,” Nolan said. “But I think the people that were here certainly gave us a boost, and how hard they fought even to be here.”

Gionta added: “It’s one of those games you can certainly get lulled to sleep pretty quick or lose that energy. You got to create it from within.”

A myriad of factors – the Sharks don’t come back east until March, the game was on national television – likely contributed to the teams playing.

A huge storm forced a postponement here in January.

“I was a little bit surprised when we did say we were going to play,” Nolan said. “I thought this year was a little worse than the one last year. Buffalo’s a tough city and always finds a way to get through those type of things.”

The Sabres are offering fans with unused tickets the opportunity to exchange them for a game later this season.

By then, if the Sabres keep improving, they could be out of the basement.

They’ve played much better in the past week or so, scoring 13 goals in the last three games.

The Sabres’ Nick Deslauriers opened the scoring 5:25 into the second period. Brent Burns tied it later, seconds after the Sharks’ Patrick Marleau hauled down Torrey Mitchell on a breakaway. Nothing was called.

The Sabres responded strongly to the adversity.

“It’s a big momentum-changer,” Gionta said. “I like the way our team responded. We’ve been doing that lately.”

Gionta put the Sabres up less than two minutes later. He fed Brian Flynn on a two-on-one at the end of the second period.

With his empty-netter, Gionta equaled his point total from the first 19 games in one night.

Incredibly, the Sabres have beaten the Sharks eight straight meetings.

The Sabres scored on three of their first 10 shots and only had 14 total.