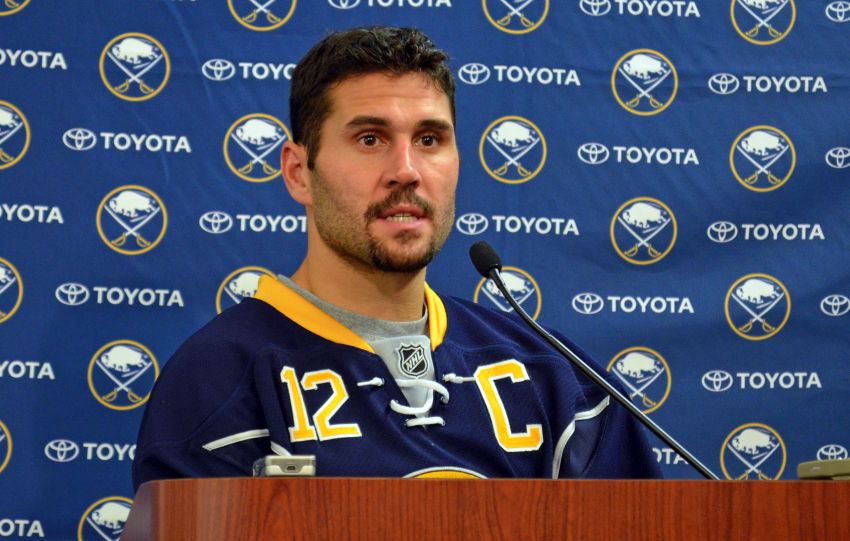 Gorges noticed the professionalism Gionta exhibited, the strong habits that made him a leader and respected captain.

“I’ve said this all along, when you’re a young guy coming into a team … who do you look to in the room and say, ‘This is who I got to follow to have success?’” Gorges said Tuesday. “He’s the epitome of that. He’s won the Stanley Cup, and that’s all of our ultimate goals. He knows what it takes to get there.”

To Nolan, awarding Gionta the prestigious ‘C’ to lead the youthful, rebuilding Sabres was an “obvious” choice. The move had been expected since Gionta signed a three-year, $12.75 million contract July 1.

“I bet you didn’t see that one coming,” Nolan joked.

“It speaks to the direction ownership, management, coaching staff, the players … want to go,” Gionta said about the new group. “Everybody’s on board.”

“I think one of the things the guys have noticed is this is one of the tightest groups we’ve had here in a while,” he said. “With the guys who were given the letter today, they’re going to be leading the charge for us. They’re a prime example of how you should act.”

For the first time in years, the Sabres have stability in their leadership group.

They dealt Vanek before October ended. Ott was dished in February. The Sabres bought out Christian Ehrhoff, their alternate captain, in June.

Gionta, Gorges and Moulson have a combined 12 years left on their contracts. Each player chose to join the Sabres this offseason. Gionta signed shortly after Gorges said he would leave Montreal to accept a trade to Buffalo. Moulson returned after a short stint in Minnesota.

Nolan, who’s beginning his first full season as Sabres coach since 1996-97, believes the trio will fill a leadership void he noticed after Ott left.

“Coming in, going in a new direction, I just thought new leadership, a new approach – new everything,” Nolan said. “We’ll have a nice, fresh start for everyone. These three guys, you watch them in practice, you watch them in the room. We were watching them from the first day we met on how they interact with other people.

“To me, that really shows the type of people they are, the type of leaders they will be.”

Gionta learned from some legendary leaders during his early days with the New Jersey Devils, where he won a Cup in 2003.

He called Scott Stevens “very intense.” Scott Niedermayer was “laid back.” Joe Nieuwendyk was a mix of both.

Gionta served four seasons as Montreal’s captain, one of hockey’s most prestigious honors. Still, he didn’t expect the Sabres would just give him the captaincy.

Entering training camp with a new team, Gionta “was trying to get comfortable with the guys, grow with the guys.”

“Trying to find your place in the room, have them accept you,” he said. “You don’t go out of your way. We all come into the rink every day, do what we do. You don’t stray from what you are, the person you are, the character you are. It’s not for show.”

He added: “Every situation’s different. Whether you’re in Montreal or here, it’s getting a feel for that room, getting accepted and gaining that respect, and the way you gain that respect is you earn it.”

“He’s been everything we thought he would be,” Myers said. “He’s been such a veteran presence coming in. I think we lacked a little bit of that in the last couple years.”

Sabres winger Drew Stafford, the longest-tenured player, wore an ‘A’ late last season but was passed over.

“Drew stepped up as well as anybody could,” Nolan said about last season.