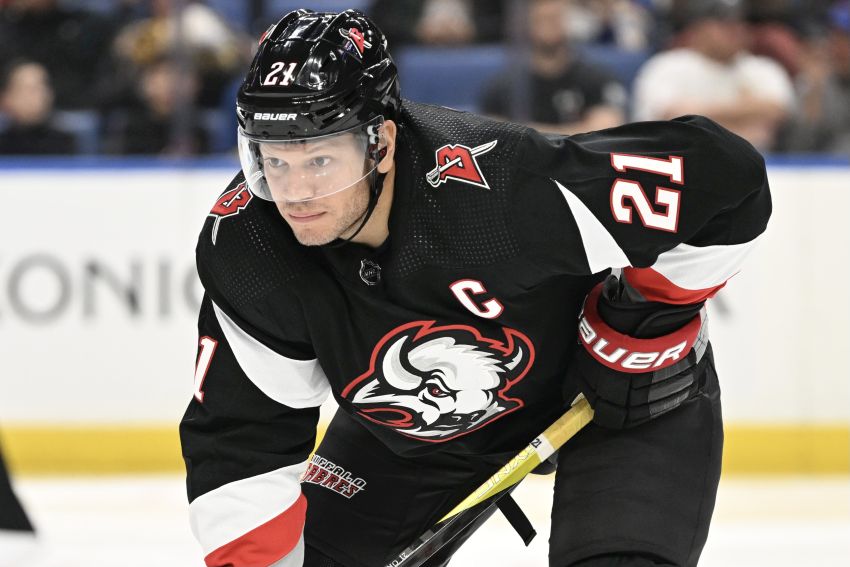 Kyle Okposo knows the Sabres need to start better than they did on Monday. ©2023, Micheline Veluvolu

BUFFALO – In a span of two days, the Sabres won a thrilling come-from-behind overtime contest before a raucous capacity crowd and got shut out in front of about 9,000 empty seats.

The ebb and flow of a grueling six-month season can create some real clunkers, and the Sabres clearly experienced a letdown on Monday in losing 4-0 to the Philadelphia Flyers at KeyBank Center.

Fresh off Saturday’s exciting 6-5 triumph against the Minnesota Wild, the Sabres looked out of sync from the get-go, falling behind just 2:04 game.

The Sabres, the NHL’s highest-scoring team, never got on track and were blanked for the first time this season.

Coach Don Granato said an emotional week finally caught up to the Sabres. In the wake of Bills safety Damar Hamlin suffering cardiac arrest and having to be resuscitated on the field last Monday in Cincinnati, they rallied on Tuesday to beat the Washington Capitals 5-4 in overtime. Then they downed the Wild in one of the most entertaining games in recent memory.

“Two days ago, I thought we were riding a very emotional week and had lots and lots of emotional energy … in the building with the atmosphere,” Granato said. “I thought tonight our guys looked and felt emotionally drained. They just had a really difficult time executing things that they execute simple. They didn’t look like themselves. We fought the puck all night and we didn’t look fast. We were struggling to move pucks. …

“The effort, I know they were pushing and trying but a lot of guys just didn’t look like themselves.”

“We looked heavy, we looked like we were skating in sand sometimes,” Granato said. “And when you have ice in front of you and you don’t take it, lots of missed opportunities, shots we’re usually sharp at, picking a corner or tracking a rebound. Everything was a bit of surprise tonight.”

Okposo said: “Physically, I don’t think we had our legs, and we weren’t where we needed to be, but it was definitely more of a mental game out there, for sure.”

Goals from Zack MacEwen, Joel Farabee and Noah Cates scored in the first period as the Flyers outshot the Sabres 16-5.

“You try and learn from it,” Okposo said. “We try and get going in the second and third. I just think the emotional toll of that first period was a little bit too much for us to come back from. Just disappointing with how we’ve been playing. Just a little bit of immaturity on our part.”

Goalie Samuel Ersson recorded his first NHL shutout in his fifth career game. With the Flyers up 1-0, the Swede stopped Sabres center Peyton Krebs on a breakaway, the best of his 28 saves.

Wade Allison scored early in the third period to seal the Flyers’ fifth win in the last six games. The Sabres, meanwhile, lost for just the second time in the last 10 contests.

“We didn’t start well,” Sabres center Tyson Jost said. “Saturday night there was obviously a lot of energy in the building and we were excited for that game. I think that’s just part of our learning process. We have to know that every single game is an important game and it matters.”

The Sabres, who lost for the first time in their black “Goathead” alternate jersey, host the Seattle Kraken tonight.