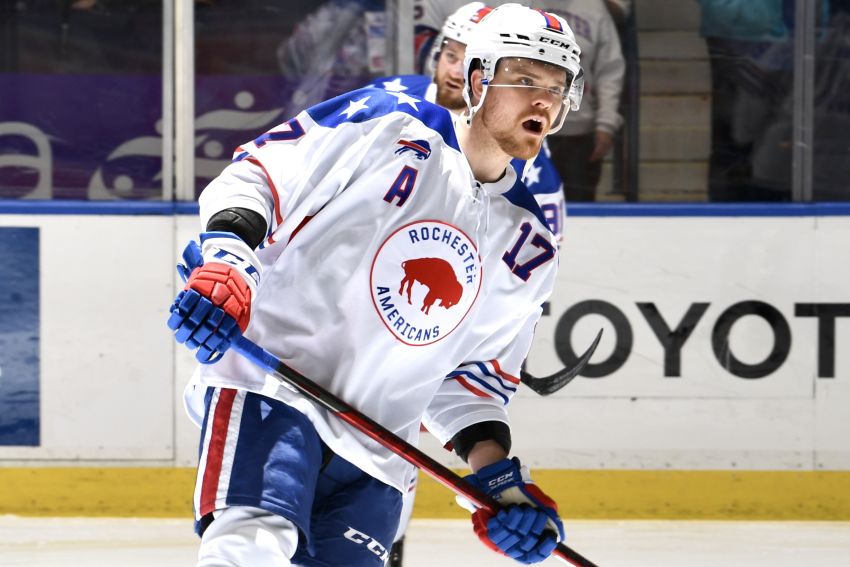 In the hallway outside the dressing room in Blue Cross Arena, an agitated Malone searched for the right words to describe his feelings.

“A lot of it falls on me,” Malone said following the stunning 6-5 overtime loss, a game in which the Amerks led 5-3 with less than four minutes remaining.

“Of course, the puck lands on his stick, he’s able to score on the open net,” Malone said.

The versatile Malone’s first season back in the Sabres organization has been filled with growth and frustration. The West Seneca native has seized the first leading role of his five-year AHL career, producing 12 goals, tying his career high, and 26 points in 26 games.

But COVID-19 and a lower-body injury that required surgery in mid-January combined to sideline him 30 straight contests. If he had stayed healthy, early in the winter he likely would’ve played some NHL games when COVID and injuries ravaged Buffalo.

He tweaked his injury in his return March 9 and missed five more games. Sunday was just his third outing since Dec. 19.

Malone, of course, has a history of responding well to adversity. After battling a string of injuries in 2018-19 and settling for an AHL contract, he enjoyed a terrific comeback season. Then last year, he made it back to the NHL, playing one game for the Nashville Predators.

His latest injury came in the midst of a career-best stretch.

“It’s frustrating,” Malone said. “I have a lot of belief in myself that I’m a good player and I didn’t think I had much opportunity early in my career. As I got older, a little more experience, it’s nice being able to contribute to the lineup, play regularly. I think you gain confidence from that, and, obviously, had to deal with some injuries, as a lot of players do.

“This one stung a little bit this year because I thought we were doing really well in the beginning of the year, and then to be away from the team for as long as I was, was tough mentally.”

The Amerks, who not long ago looked to be securely in a playoff spot, lost three straight games (0-1-2) over the weekend and have compiled just a 4-5-3 record this month.

Injuries and recalls have decimated the lineup at times, and the losses have kicked the Amerks to sixth place in the North Division.

“It’s something we have to hone it on going toward the end of the year like this, we need these points, it’s not going to be easy and we know that,” Malone said. “It’s a totally different game now than it was, that I think these guys were used to in the beginning of the year. There’s not a lot of time and space. You got to really work to create you opportunities.”

The recent returns of Malone and captain Michael Mersch and rookie Jack Quinn, the Amerks’ top two goal scorers, should boost the Amerks down the stretch.

Amerks coach Seth Appert said “it’s hard to describe how much Malone means to the team, how much we missed him.” Malone scored three goals and five points in his first three games back.

“Like, he plays hard minutes. It’s hard to describe how much a player like Malone is missed when he’s not there. It’s great to have him back, and I know he’s just going to keep getting better as he gets into better shape.”

The Amerks on Monday added experience to their blue line, acquiring defenseman Mark Alt from the San Jose Barracuda in exchange for forward Mason Jobst.

The 6-foot-4, 201-pound Alt has played 20 NHL games with the Philadelphia Flyers, Colorado Avalanche and Los Angeles Kings over his nine-year pro career.

Alt has compiled three goals, eight points and a minus-18 rating in 46 games this season.