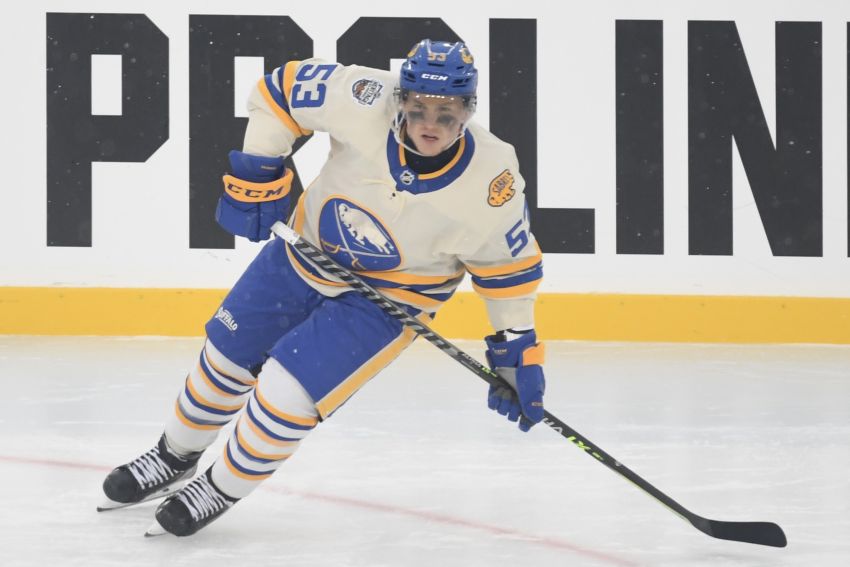 BUFFALO – In having their three-game winning streak snapped Friday, the Sabres showcased how much they’ve evolved and grown this month.

On a night they clearly weren’t at their best, the Sabres scratched and plowed forward, taking the Washington Capitals down to the wire before losing a 4-3 shootout.

In compiling a 7-3-1 record in March, the Sabres have proven they can thrive in tight games and rise to the level of their competition.

“It shows that we’ve taken a lot of steps and we’re definitely more confident against those teams,” said winger Victor Olofsson, who scored the Sabres’ third goal. “I think it really shows just a confidence in every line and D pair out there. We’ve been very hard to play against it feels like so we’re definitely on the right path.”

During their three-game streak, they won two games in overtime and another in a shootout. In Friday’s overtime before a crowd of 9,740 fans at KeyBank Center, they outplayed Washington, pumping seven shots on goalie Ilya Samsonov.

“It’s nice the overtime is an indicator of confidence and comfort,” Sabres coach Don Granato said. “Being around these guys every day you could tell we didn’t have our game tonight. Sometimes you have to find a way when you’re not playing your best or as smooth as normal.

“When you’re at home, it’s a great building to play at but sometimes that can make you press. And we didn’t even press at all even though we were making some mistakes. We just plugged through it.

“When I watch the overtime you get a glimpse of where you are going because they processed the puck and knew when to take the puck back and regroup.”

Sabres winger Jeff Skinner scored twice in regulation, his eighth outing with two or more goals this season. His 26 goals rank second on the team behind Thompson, who has scored 27 times.

Olofsson’s goal was his fifth in the last 11 games. He missed an open net with the game tied late in regulation.

Anthony Mantha opened the scoring at 9:15. Skinner tied it on just the Sabres’ second shot on goal at 15:49, backhanding the puck from the edge of the slot.

“Yeah, you don’t want to start a game that way, but I think overall we did a decent job of kind of getting past that.”

Nick Jensen put the Capitals back up 4:06 into the second period before Skinner tied it again from the left circle at 10:23.

Olofsson gave the Sabres their first lead at 12:55, connecting on a nifty backhand pass from center Casey Mittelstadt in close.

“You always got to be ready when you’re playing with Casey,” Olofsson said. “It was a hell of a pass by him.”

“We didn’t have our A-game tonight and we battled that, but we battled it the right way,” said Granato, whose team was outshot 40-23. “I think that’s a game … the result might have been earlier in the year on certain nights. We looked comfortable, found a way to be comfortable and had to play a little smarter when we didn’t have our game. We did that in the third period to stay in it and give us the potential have two points.”

One thought on “Sabres showcase more growth in loss to Capitals: ‘Taken a lot of steps’”