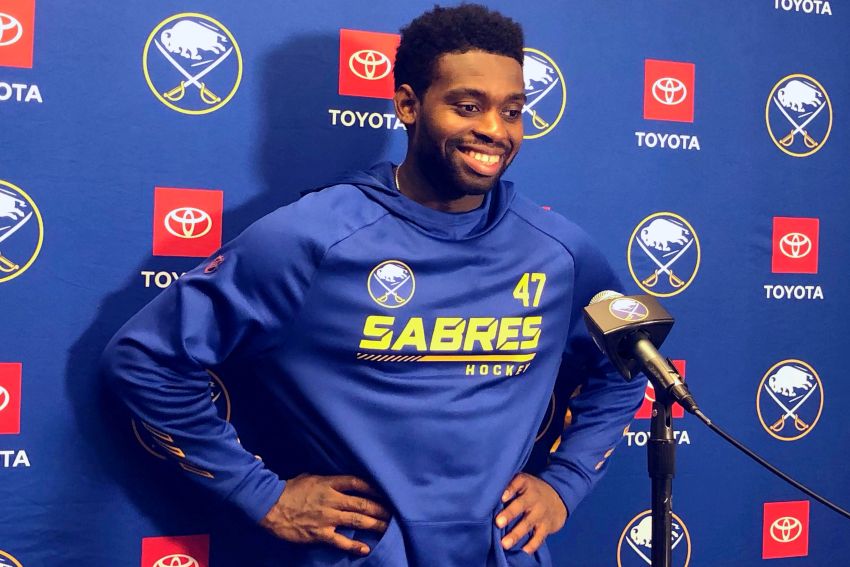 Malcolm Subban talks to the media following his 45-save performance Dec. 17 in Pittsburgh. ©2022

The Sabres, having lost three goalies, would need to utilize Subban, 28, as their starter. The net, for the time being at least, appeared to be his.

Then about 16 minutes into his relief appearance that night, 6-foot-3, 238-pound Tampa Lightning winger Patrick Maroon fell on Subban.

The freak accident injured Subban. Despite being in noticeable pain, he gutted out the final 24 minutes at KeyBank Center.

On Thursday, Sabres coach Don Granato said Subban, who has been sidelined with an upper-body injury, underwent surgery and will likely miss the rest of the season. Subban appeared to injure his hand or wrist.

“It is tough because he’s a happy guy, he’s always got a smile on his face, he works hard,” Granato said of losing Subban.

Subban has endured a rough seven weeks. Following his arrival from the Chicago Blackhawks on Dec. 2 – he had spent all season in the minors – he suffered an undisclosed injury late in his first start Dec. 4, a 6-2 loss to the Carolina Hurricanes.

He did not play again until Dec. 20, a 3-2 overtime loss to the Pittsburgh Penguins in which he performed brilliantly, making 45 saves.

“I was aggravated on the coaching side, I thought we just didn’t help him enough first game,” Granato said. “And then he starts getting in a little bit of a rhythm and comfortable around the guys and the team, and now it’s a season-ending injury.

“So, yes, it is a bummer when you see a guy that’s so excited and committed and now it looks like it’s gone because it’s right on the cusp of not being able to back in time for the end of the season.”

Subban has compiled a 0-2-1 record with a 4.85 goals-against average and an .871 save percentage in four games this season.