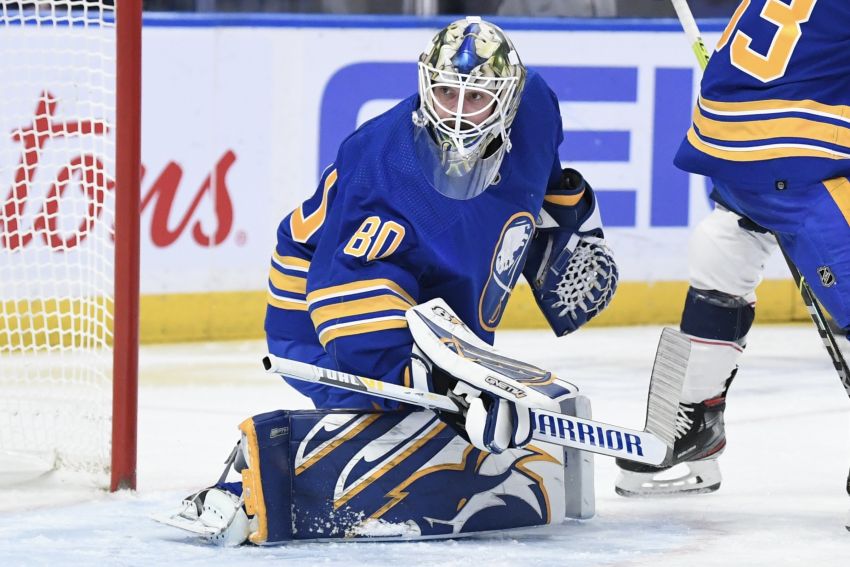 Aaron Dell could have a hearing with the NHL Department of Player Safety. ©2022, Micheline Veluvolu

In a season in which they’ve lost 29 of their 42 games and dropped six contests by four or more goals, the Buffalo Sabres have offered some pretty dismal performances.

Tuesday’s ugly 5-0 loss to the Ottawa Senators at Canadian Tire Centre ranks among the worst.

The Sabres looked downright awful after a solid start, allowing three goals in a span of 2 minutes, 55 seconds late in the first period and losing for the 10th time in their last 13 outings (3-7-3).

To make matters worse, the Sabres, who were forced to sign a goalie earlier this month because they have four sidelined, could be without netminder Aaron Dell when they continue their four-game road trip Saturday against the Arizona Coyotes.

Dell’s cheap shot that injured winger Drake Batherson, who scored the Senators’ second goal, earned him a hearing today with the NHL Department of Player Safety.

With about a minute left in the first period, after he stopped the puck for defenseman Mattias Samuelsson beside the net, Dell put his shoulder into Batherson as Ottawa’s leading scorer pursued Samuelsson. Batherson’s feet hit the ends boards awkwardly and he had to be helped off the ice. He did not return.

Senators coach D.J. Smith told reporters in Ottawa that Batherson, who has scored 13 goals and 34 points this season, will miss the NHL All-Star Game on Feb. 5.

“It definitely stings,” Senators captain Brady Tkachuk of Batherson’s loss, according to The Ottawa Sun. “It definitely (stinks). Quite frankly, it was just a (nonsense) play. What happened was unnecessary and dirty. You just feel for Bath. He’s put in so much work to get to where he’s at.”

Dell said he was trying to buy time for Samuelsson and step into Batherson’s lane.

“I hope he’s all right,” Dell said. “I wasn’t trying to hurt anybody.”

Dell said he hadn’t watched the hit, so he wasn’t sure if Player Safety might be calling.

“He wasn’t in the path of the goalie and, at the last second, the goalie steps back and hits him,” Smith said. “When I come in and I see replays of him doing it other times and running out to hit other players, you know it’s a pattern. It’s unfortunate because our best, leading scorer, is going to be out a significant amount of time on a play that didn’t need to happen.”

Sabres coach Don Granato said he only saw the hit from the bench.

“You don’t want to see anybody get hurt,” Granato said. “I’ll have to take a look at it before I could even comment on it.”

Dell said the Senators said they would be all over him throughout the night, although nothing notable materialized.

Dell lowers the shoulder on Batherson and he took a bad fall into the boards. #LetsGoBuffalo #GoSensGo pic.twitter.com/FtC3ILEIlJ

If Dell gets suspended, the Sabres would be left with goalie Michael Houser, who has won two starts since he recently signed an NHL contract.

Granato hopes Anderson can play by the All-Star break. Perhaps he can return a few days early if the Sabres need him.

Anderson must first up his practice load and test his injury.

“He’s pushing it, he wants to see if he can do it,” Granato said of Anderson’s potential return. “So … he’s going to ramp it over the next couple days to see where he feels. We’re not sure how he’s going to feel as he ramps it up. The hope would be he’s pushing it to say, ‘OK, let’s have a self-imposed deadline here, let’s try to get in here sooner than later.’

“Obviously, we have a break after this next road trip for a week. So that’s a target for him, an internal target. To hopefully meet that he’s going to hop full-go in practice, and that’s going to be the first gauge of information we’re going to see we just don’t have yet.

Ex-Sabre Tyler Ennis, who had one goal in 30 games all season entering the night, recorded the second hat trick of his NHL career for the Senators.

“Casey did not look like Casey, that was clear and evident,” Granato said. “Even the first shift, he had a chance at a breakaway there and he just couldn’t move.”

Mittelstadt said: “I’m not very happy with how I played. But it’s game one back, I’m just going to wash it away and forget about it.”