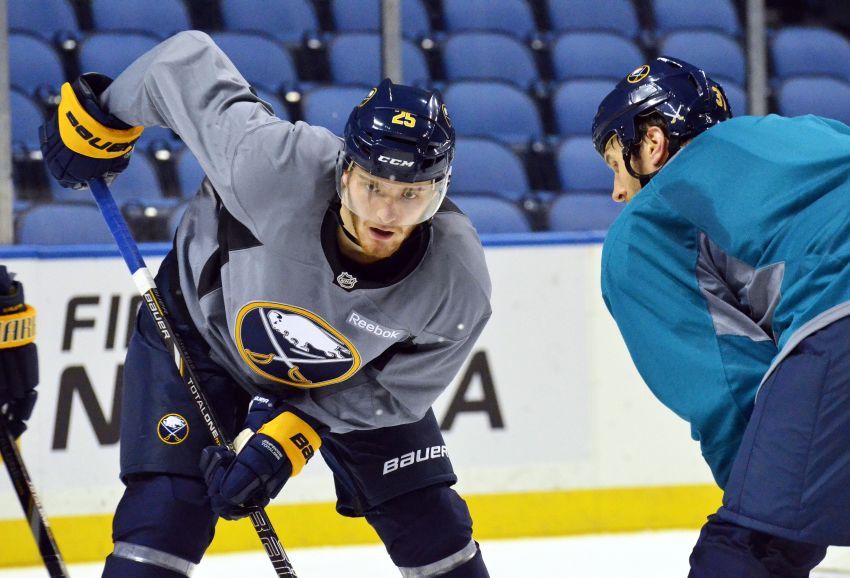 BUFFALO – The Sabres first planted the seeds almost seven months ago inside the Consol Energy Center. Mikhail Grigorenko, the slick center that had just fallen to them 12th overall at the NHL Entry Draft, would be given every chance to play in the big leagues immediately, they said.

The strong words from the team’s brass that June night in Pittsburgh resonated. The Sabres hadn’t had an 18-year-old play regularly for them since center Pierre Turgeon, the No. 1 overall pick in 1987-88.

Today, fresh off five impressive training camp sessions, Grigorenko’s on the cusp of making his NHL debut. Not surprisingly, the Russian made the Sabres’ 23-man regular-season roster on Friday.

But will Grigorenko be in Sunday afternoon’s opening-day lineup against Philadelphia?

“I could’ve stepped up here and asked that question,” Sabres coach Lindy Ruff joked as he began answering questions Friday inside the First Niagara Center. “Mikhail’s had a good week. Obviously, I’m not going to give you that decision right now. We got another practice day.”

While the Sabres won’t say it, all signs point to Grigorenko playing immediately. He’s been centering the team’s third line all week between Ville Leino and Steve Ott.

The Sabres can play Grigorenko five times before the first year of his entry-level contract kicks in. The youngster knows expectations could be low as he’s acclimating himself to the NHL.

“I don’t think that somebody waits for me to score … like five goals every game or something,” said Grigorenko, who was informed by a reporter he had made the roster.

Clearly, Grigorenko, who torched QMJHL opponents for 29 goals and 50 points in only 32 games this season, has been showcasing his entire skill set throughout camp.

“He defends well for a young player,” Ruff said. “He’s defending against his teammates. You’d love an opportunity to see him in preseason games against other NHL players. But still, he does have real good awareness. He understands the game. His strength really is his playmaking, quick hands.”

As Ruff said, the Sabres’ evaluation of Grigorenko has been a bit tougher because the NHL couldn’t play preseason games during the lockout-shortened camps. Ruff played Tyler Myers nearly every exhibition contest in 2009 as the defenseman was vying to make the team as a 19-year-old.

“You’re going to have a lot of teams in the same situation that are trying to judge young players,” Ruff said. “You just want to make the right decision that’s going to set him up for his career. You wish you had more time, we don’t. But you like what you’ve seen.”

Teammates, Grigorenko said, have been helping him feel comfortable from the get-go.

“You really can see that it’s such a good team, everybody helps each other, almost all the guys, they wanted to help me, support me,” he said. “They kind of made a good atmosphere for me.”

Grigorenko could have one huge advantage over other players, at least early on. He’s been going full-tilt and playing games since August for the Quebec Remparts and Team Russia. He just finished a strong performance in the world junior championship.

“I think it’s good for me because I have game shape,” Grigorenko said. “I wouldn’t say I’d take some advantage from them, but it would … help me and it would be kind of easier for me because those first games not all the guys will be in game shape.”

Sabres winger Drew Stafford believes Grigorenko’s “definitely ahead of the curve for 18.”

“He’s a heck of a player and he’s got a really good future ahead of him,” he said. “Hopefully, he can continue to develop.”

If that happens, Grigorenko could stick around. Turgeon played 76 games 25 years ago, scoring 14 goals and 42 points. Other appearances by 18-year-old Sabres have been sparse. Goalie Martin Biron played three games in 1995-96, the same season defenseman Jay McKee played once.

“Everything’s going really well for me,” said Grigorenko, who’s excited to hear his name announced after his first goal. “I really like being here, and I hope I’m going to be staying here.”

Meanwhile, defenseman Adam Pardy and forwards Kevin Porter and Nick Tarnasky cleared waivers Friday. Pardy, a veteran of 183 NHL games, played for Rochester later in the day. Porter and Tarnasky have been with the Americans all season.

The Sabres kept defenseman T.J. Brennan, who would’ve had to clear waivers.

The team reached the 23-man roster by placing forwards Nathan Gerbe (spine) and Cody McCormick (finger) on injured reserve. Both are practicing.

Ruff’s glad the Sabres aren’t one of the 26 teams in action today. He plans to spend the day scouting other NHL contests and watching the officiating.

The league recently sent a memo and a video outlining some new rules, Ruff said. He mentioned no-hand faceoffs, players covering the puck with their hand in the defensive zone and more awareness on slashing.