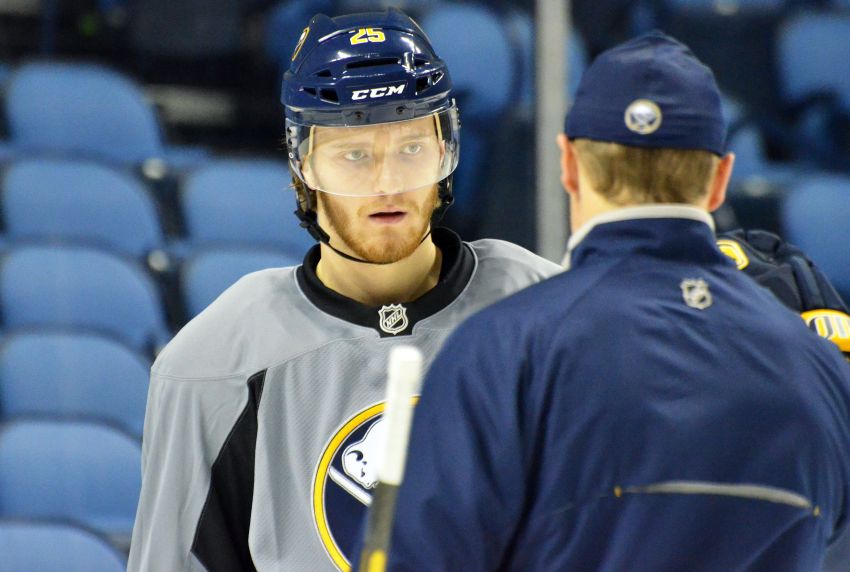 But will the 18-year-old center be in Sunday afternoon’s opening-day lineup?

“I could’ve stepped up here and asked that question,” Sabres coach Lindy Ruff joked as he began fielding questions this afternoon inside the First Niagara Center. “Mikhail’s had a good week. Obviously, I’m not going to give you that decision right now. We got another practice day.”

While the Sabres won’t say it, all signs point to Grigorenko making his NHL debut Sunday here against Philadelphia. The Russian was still centering Ville Leino and Steve Ott during practice today.

They can play him five times before the first year of his entry-level contract kicks in.

“I don’t think that somebody waits for me score … like five goals every game or something,” Grigorenko joked.

So far, Grigorenko’s enjoyed his five days of training camp.

“You really can see that it’s such a good team, everybody helps each other, almost all the guys, they wanted to help me, support me,” Grigorenko said. “They kind of made a good atmosphere for me.”

Meanwhile, defenseman Adam Pardy and forwards Kevin Porter and Nick Tarnasky cleared waivers today. Pardy, a veteran of 183 NHL games, has been assigned to Rochester. Porter and Tarnasky are already playing for the Americans.

The Sabres reached the 23-man roster by placing forwards Nathan Gerbe (spine) and Cody McCormick (finger) on injured reserve. Both are practicing.