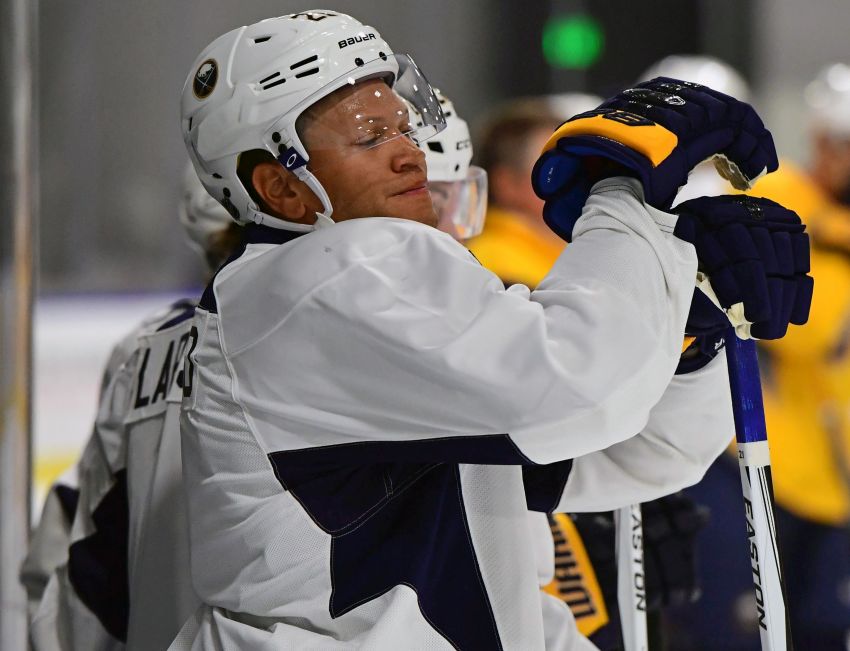 BUFFALO – It wasn’t Kyle Okposo’s first time on the ice. That milestone came months ago, after the Sabres winger recovered from the scary concussion that left him hospitalized in intensive care. It wasn’t his first scrimmage, either. The affable veteran played pickup hockey at home this summer in Minnesota.

Still, Okposo’s skate Tuesday inside HarborCenter, a normal early-September session with some scrimmaging at the end, was significant.

Once again, Okposo, who suddenly left the lineup in late March, was skating with his teammates in Buffalo.

“It was obviously a tough situation, tough road,” a reflective Okposo said. “I’m just happy to be back and happy to be able to play again and play at a high level.”

Okposo, 29, smiled and spoke positively Tuesday during his six-minute chat with three local reporters. But at times in the spring, he said, he wondered if he would ever feel normal again.

“When you’re going through an experience like that, your mindset’s questioning a lot of things,” he said. “That’s probably one of them. I have a good support team around me. … I knew that I was going to pull through.”

To recap, when the Sabres first scratched Okposo on March 28, it was believed he had the flu. Within days, however, it appeared he was battling something far worse.

Then word came out Okposo was in the neuro surgical unit at Buffalo General Hospital.

The Sabres, of course, remained tight-lipped. Eventually, new Sabres general manager Jason Botterill said in mid-June Okposo was doing well mentally and physically and would be ready for training camp.

In late July, Okposo began playing in a four-on-four summer league. Days later, he released a letter to the public explaining his ordeal and thanking fans for their support.

Okposo said an innocent hit during practice late last season led to his hospitalization. Sleep medications given to him caused a negative reaction in his body. He began losing weight at an alarming rate.

On Tuesday, Okposo said he turned a corner around May.

“I started to feel pretty normal again and day-to-day activities seemed to be easy again and everything was good,” he said. “I just felt clear throughout the summer and continued to do some work and get healthy. I feel really good.”

Okposo sounded ready to play a real game immediately. Training camp opens next Thursday. Since he missed so much time, he deviated from his normal routine this summer and participated in more “game action.”

“It’s obviously not like a real game, but I wanted to scrimmage more than I usually do,” he said.

Okposo usually produces around 20 to 25 goals and 55 to 60 points a season. After signing a seven-year, $42 million contract with the Sabres in free agency last year, he compiled 19 goals and 45 points in 65 games before his 2016-17 campaign ended.

The Sabres sorely missed his production and leadership. Without Okposo, they finished 1-5, cementing their last-place finish.

Not surprisingly, the Sabres’ new direction excites Okposo. He met Botterill in the spring and believes “he really knows what he’s doing.”

“He really has a clear vision of where this organization is going to go and wants to go,” he said. “I think it’s really important to have that direction. I’m really looking forward to it. I think what he did over the summer was good for our squad and good for our organization.”

Okposo, who would be a strong candidate for the Sabres’ vacant captaincy, knows new coach Phil Housley well. The Hall of Fame defenseman also hails from Minnesota and coached Okposo with Team USA.

Housley plans to showcase the fast style he did as an assistant in Nashville.

“I’m always a proponent of more offense,” Okposo said. “I’m really looking to what he’s going to bring to our team.”