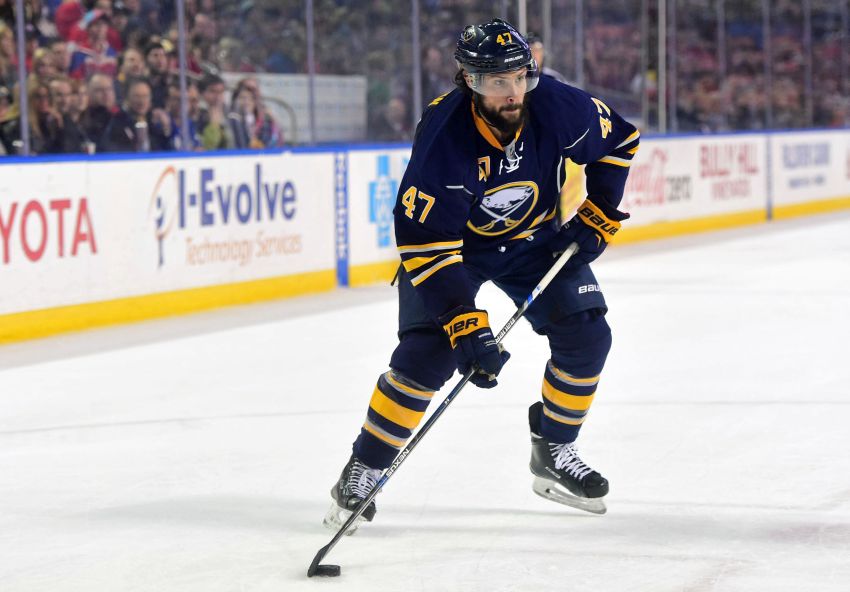 In recent weeks, inevitably a few times a game, Bogosian will grab the puck, and, like few players can, start zooming around the ice.

Bogosian, 25, has been playing his best and most aggressive hockey this season, logging big minutes and piling up points.

“I’ve been feeling confident the last month or so,” Bogosian said Thursday inside HarborCenter. “I think after the All-Star break I came back with some rest, (a) fresh mindset. … I like where my game’s going. I just got to keep it up.”

Bogosian has four goals and 10 points in his last 12 games entering tonight’s tilt against the Ottawa Senators inside the First Niagara Center. The Massina native compiled one goal and 16 points in his first 63 appearances with the Sabres dating back to his February 2015 arrival from the Winnipeg Jets.

In Wednesday’s feisty 3-2 overtime loss to the Montreal Canadiens, Bogosian enjoyed perhaps his best game of 2015-16, scoring his fifth goal and pumping a season-high eight shots on goal (all in the first 40 minutes) while skating 21 minutes, 20 seconds.

Bogosian almost certainly would’ve eclipsed the 25-minute mark for the fourth time in eight contests, but he was whistled for two roughing penalties and a 10-minute misconduct late in the second period.

“I don’t know what warranted the 10-minute,” Bogosian said. “I definitely should’ve gotten the four-minute (penalty).”

Clearly, Bogosian has finally recovered – physically and mentally – from the lower-body injury that shelved him just days into training camp. After missing the entire preseason and the first 17 regular-season games, the former third overall pick often played tentatively. He started performing better in late January.

Bogosian, of course, is at his best when he’s skating aggressively and showcasing an edge.

“Playing with that abandon both defensively and offensively,” Bylsma said. “He’s one of the better skating players on our team. I think he’s showing that now a little bit more.”

To Bogosian, missing so much hockey – he went 220 days between games – creates “a lot of things that are on your mind.”

Bogosian’s emergence has taken some pressure off Josh Gorges and Rasmus Ristolainen, the Sabres’ No. 1 defense tandem. Bylsma now has two pairs – Bogosian has recently been skating beside rookie Jake McCabe – for matchups.

“If you make a mistake, you’re not thinking about it for a couple shifts,” he said. “You’re focused at what’s in front of you. You just try to play the right way. Surprisingly, maybe your legs feel a little bit more refreshed because you may be aware that you’re playing that many minutes.

“You’re jumping into the play, you’re making reads. It’s just more instinctive stuff. That’s the way I like to play.”

If Bogosian can keep playing aggressively, he should consistently create offense. On the low-scoring Sabres, his production has been vital.

“I think it’s a good mindset to have to try to attack with four instead of just have our three forwards do all the work,” he said.

He scored on the power play Wednesday after moving in and grabbing Ryan O’Reilly’s pass in the right circle before batting his own rebound in baseball-style.

Bogosian needs one more point to hit 20 for the third time in his eight-year career.

“You like to think it’s karma from working hard,” he said about his production.