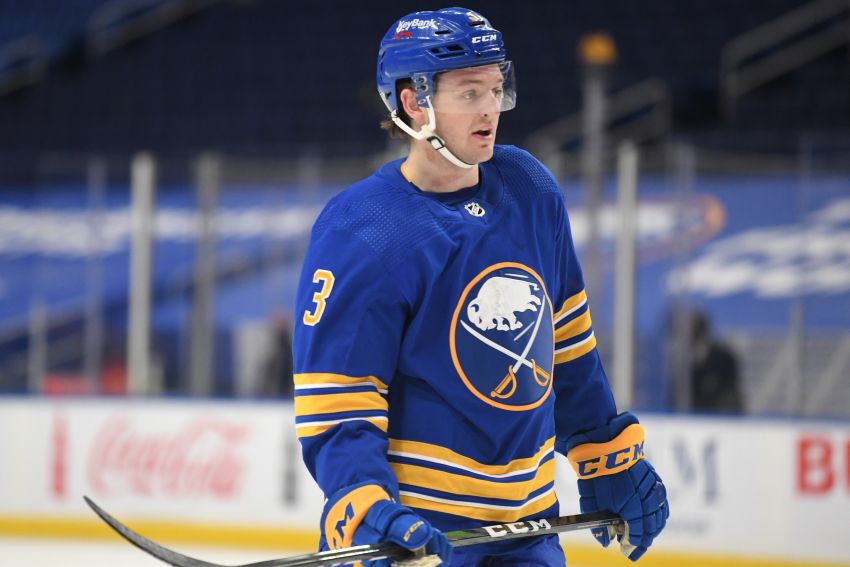 BUFFALO – In his first shifts in nearly a year, Sabres defenseman Will Borgen said he was breathing heavy.

Nothing, of course, can replicate game action, and Borgen, 24, hadn’t experienced any since March 11 as a member of the Rochester Americans.

“Just not used to the speed, controlling my energy,” Borgen said of the early moments of Monday’s 3-1 loss to the New York Islanders at KeyBank Center.

But Borgen, who had spent the entire season on the taxi squad, settled in and said he “felt pretty dang good out there.”

“Matt Ellis has helped me out a lot so far getting ready,” Borgen said of the Sabres’ director of player development, who runs the taxi-squad sessions.

The Sabres reassigned Borgen to the taxi squad Wednesday following his first two NHL appearances since a four-game stint late in 2018-19. Based on his performance and the team’s rigorous schedule – the Sabres have 44 games scheduled for 79-day stretch – he could earn another look soon.

On Monday, the 6-foot-3, 205-pound Borgen formed a solid defense tandem beside veteran Brandon Davidson, who was also making his season debut.

“They’ve put a healthy pressure on our D corps,” Sabres coach Ralph Krueger said of Borgen and Davidson on a Zoom call Tuesday morning. “They keep you honest. When you watch them step in and play a game like they did last night, that does give us confidence in our depth. We didn’t know what we had. Certainly a healthier depth than what many might perceive from the outside.

“Both of them, what they did (Monday) is a compliment to the work ethic they’ve had in practices. The attention they have to detail and how we want them to play, they stepped right into the system as if they had played all 11 games.”

The Sabres sent Davidson back to the taxi squad prior to Tuesday’s 3-0 loss to the Islanders, so Borgen played beside Jake McCabe.

Borgen, a fourth-round pick in 2015, 92nd overall, has spent most of his pro career in Rochester since leaving St. Cloud State following his junior season in 2017-18. In 140 AHL games, he has scored four goals and 25 points.

The Minnesota native takes pride in showcasing a simple style.

“Ever since I got to college there’s forwards and stuff that are way more skilled than me,” he said. “I just try to make the simple plays and let them do the work up front, because I don’t want to over-complicate things, especially first game in.

“I just try to keep it simple make good passes and work hard on doing my job on the defensive side.”

The Sabres, who had Wednesday off, play a road game tonight against the Washington Capitals.

In addition to Borgen, the Sabres also reassigned forward Rasmus Asplund, who played Tuesday, to the taxi squad and sent four players from the taxi squad to the AHL.

Defenseman Jacob Bryson and forwards Steven Fogarty, Andrew Oglevie and C.J. Smith moved from the practice group to the Amerks.

The Sabres drafted Quinn eighth overall last year. The winger spent the early portion of the season on the taxi squad before the Sabres sent him to Rochester.

Quinn had to quarantine following his arrival because he was in Buffalo when the Sabres began dealing with COVID-19 problems.

It was believed Quinn would make his debut last week.