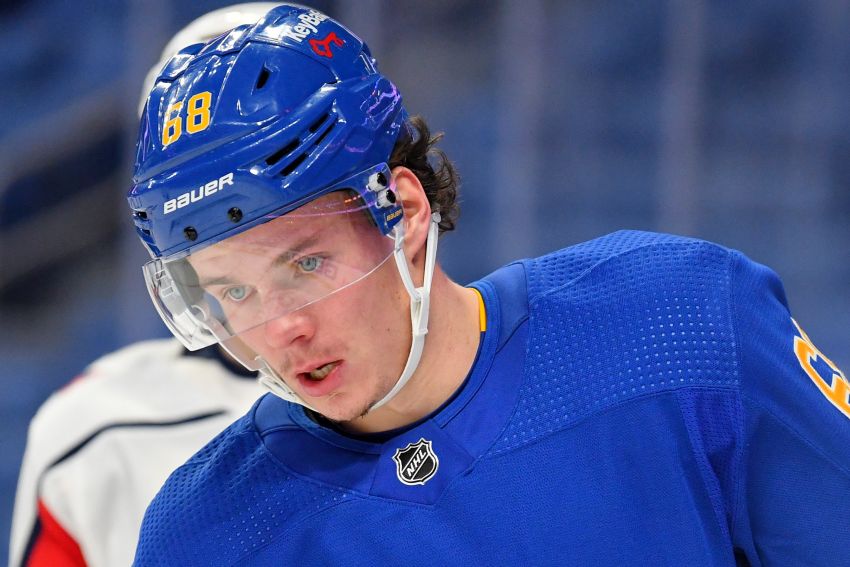 BUFFALO – Monday’s loss to the New York Islanders could’ve been penciled in days ago.

Teams coming off a break usually fare poorly against competition that has been playing uninterrupted. The short-handed Sabres were playing their first game in 15 days without six players who are still in the NHL’s COVID-19 protocol.

Adjusting to the NHL’s pace and grind after sitting idle can be difficult. The Sabres had to do it without three of their top defensemen: Rasmus Ristolainen, Jake McCabe and Brandon Montour.

Two of the defensemen the Sabres utilized for the 3-1 loss at KeyBank Center – taxi-squad regulars Will Borgen and Brandon Davidson – hadn’t played a game at any level in nearly a year.

The result, as expected, was a loss not nearly as close as the score might indicate. How bad was it? Winger Jeff Skinner recorded the Sabres’ 21st and final shot on Islanders goalie Semyon Varlamov 16:54 into the second period. They did not register a shot on a goal in the entire third period.

For the first time in their 48-year history, the Islanders held an opponent without a shot for an entire period, according to statistician Eric Hornick.

“That’s not good enough,” Sabres winger Victor Olofsson said on a Zoom call following the Sabres’ first game since Jan. 31. “I feel like we got to just throw pucks at the net. … Zero shots is, yeah, it’s awful.”

By the end, the Sabres’ lack of energy and the Islanders’ rigid structure – they execute a system and take away space as well as any NHL team – doomed them.

“There’s probably no team that manages leads better than they do,” Sabres coach Ralph Krueger said. “They just really take away the middle of the ice.”

So the Sabres relied on their power play again. Olofsson scored from the right circle 1:40 into the second period, narrowing it to 2-1 and extending his point streak to seven games.

Their power play, having converted 10 of 23 opportunities over the last six games, is scorching. But the Sabres are dreadful at even strength. They’ve scored just five even-strength goals in their last six outings.

“Coming out of our own end … was a problem before the break,” Sabres winger Kyle Okposo said of the Sabres’ even-strength scoring woes. “I think that was our biggest problem was that we weren’t coming up together with any sort of continuity. I thought tonight we did a better job of that.

“But we’ve got to find a way to get more second and third opportunities. I know that’s cliché to say, but it’s true. There were some pucks that were playing there that we just couldn’t get to and we’ve got to make sure that we’re hungry to score in the paint.”

Captain Jack Eichel said the Sabres “just got to make a play” at even strength.

“That’s it,” a visibly frustrated Eichel said. “We just have to make a play. It’s been frustrating all season. It hasn’t been there five-on-five. It seems like we’re sloppy.”

Krueger took some solace in the Sabres’ effort.

“The guys competed pretty good tonight when you look at how this group’s been brought together the last few days. The heart was there, the compete was there.”