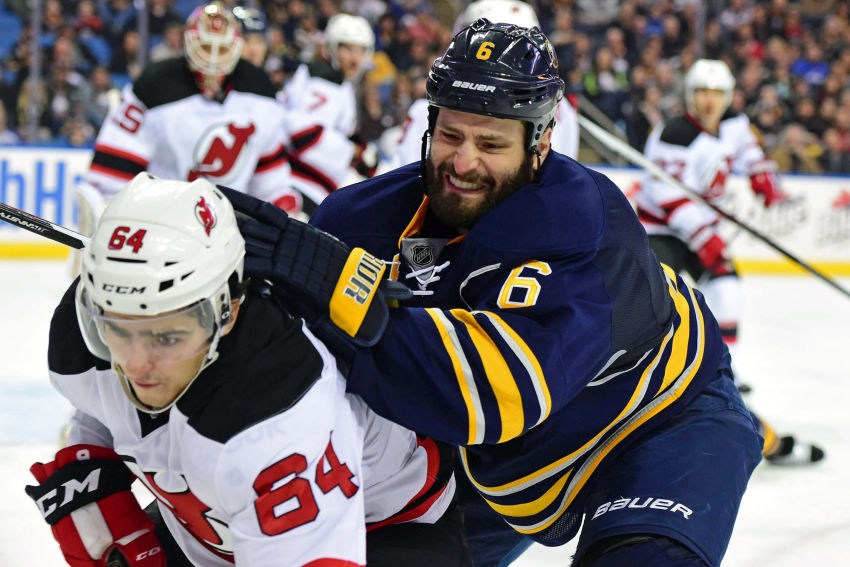 BUFFALO – When you sweat and bleed for an emblem for so long, Sabres defenseman Mike Weber said, it becomes a part of you.

Weber, 28, is the Sabres’ longest-tenured player by two full years. Having debuted Oct. 26, 2007, he has experienced all the highs and lows of the team’s recent tumultuous history.

The Pittsburgh native will proudly tell you he has grown up in the organization and how much he loves Buffalo.

“I don’t know how else to say this,” Weber said Tuesday inside the First Niagara Center. “This is home to me.”

In the early days, Weber was considered a terrific prospect. In recent seasons, fans have relentlessly chastised him over his awful plus-minus rating and some strong comments he made after the home crowd rooted against the Sabres late last season.

The Sabres’ rapid decline into a laughingstock for two seasons hurt the prideful Weber badly, and he often spoke passionately about developing a standard for success amid all the chaos.

“You want nothing more than to help this organization succeed and be a part of a success,” Weber said after the Sabres prepared for tonight’s road tilt against the Washington Capitals.

That’s why the Sabres’ resurgence this season has meant so much to him. On the first day of training camp in September, with so many new faces around him and one structured practice from coach Dan Bylsma under his belt, Weber couldn’t stop smiling.

“I’ve … seen a lot of good players in and out and seen some great players come in here,” Weber said. “It’s just exciting for this city and the guys in the locker room to get back to where we should be. Last time we were in the playoffs was (2011). That’s way too long. It’s time. This city deserves it. …

“It’s really exciting for this team to be going in the right direction and how good our team has really jelled. It truly is a family atmosphere in here. We’ve stuck together. I know it’s only been three months, but we’ve really stuck together as a family here.”

But how much longer will Weber be in that family? He’s in the final season of a three-year, $5 million contract. With his deal ending, Sabres general manager Tim Murray might want to trade him before the deadline. Veteran depth defensemen are always in demand as the season goes on.

Weber could have some value. After sitting out 11 games earlier this season as a healthy scratch, he has been playing perhaps his best hockey in years on the third pair beside Cody Franson. Weber, a minus-51 the last two seasons, has played nine straight contests and is a plus-1 overall.

His reputation for gritty play could also make him an attractive option for a contender.

Naturally, Weber’s future has been on his mind.

“You think about the stuff away from the arena with your wife and your kids and what might happen,” he said. “But at the end of the day, I can only do what I do, and that’s show up with a good attitude, work hard and play hard in the minutes I get in the games and hopefully someone’s watching and you hope that you stay here. Obviously, this is home to me.”

Undergoing knee surgery in November helped Weber get going. Bylsma said Weber probably played through the injury for too long and it hampered his skating and his ability to defend.

“I think even his puck play has been better,” Bylsma said. “His ability to skate, get to pucks has allowed him to make better plays with the puck, even on the penalty kill, penalty kill clears and that type of situation, and I think he’s played real solid in the last seven, eight games coming back from that break.”