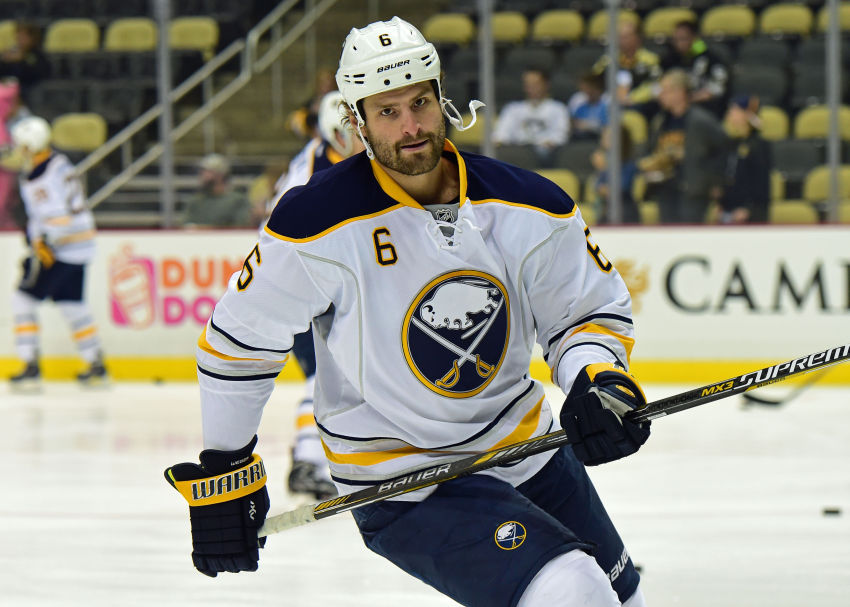 PITTSBURGH – By now, after years and years of getting scratched, gritty veteran Mike Weber knows sitting out occasionally accompanies his role as the Buffalo Sabres’ sixth or seventh defenseman.

“You never want to come out,” Weber said Thursday, “so I understand it’s kind of unfortunately built into my role for reasons unknown. … I just continue to come to the rink determined to work hard and be a good teammate, and when I get my opportunities, take full advantage of them.”

Weber, who was “really itching” to play after getting scratched two straight games, received another opportunity Thursday in Pittsburgh, a city about 20 minutes from his hometown, Cranberry.

Coach Dan Bylsma wanted Weber’s physical, “abrasive brand” around the net, so he inserted the 27-year-old, for the Sabres’ 4-3 loss to the Penguins inside the Consol Energy Center.

Perhaps Bylsma, who coached the Penguins for five and a half seasons, remembered one of Weber’s more infamous games, the night almost five years ago he punched and hounded Penguins superstar Sidney Crosby.

Playing an NHL game in Pittsburgh, something Weber did for the 10th time Thursday, is a memorable experience.

“It’s always special for me to be able to come back in this arena and have the honor and privilege of playing in the NHL,” he said. “It’s something I remember as a kid watching the Penguins play. I have a lot of respect for this league and the opportunities that you get in this league. To come home and play in front of your home fans … it’s pretty special.”

A few years back, when Sabres center Jack Eichel played in summer hockey tournaments, spectators would flock to whichever rink had the talented youngster destined for the NHL.

“When we were young, he was, like, unbelievable, best player in all those summer tournaments,” Eichel said Thursday. “To play against him, he was just faster than everyone, more skilled.”

An impressive preseason helped Sprong, a prospect many projected as a first-rounder, force his way onto a loaded roster.

General manager Jim Rutherford told the Pittsburgh Tribune-Review earlier this week the Penguins plan to keep Sprong the rest of the season.

Sabres defenseman Zach Bogosian, out since suffering a lower-body injury early in training camp, joined his teammates toward the end of Thursday’s morning skate.

Bylsma said Bogosian, who practiced once two weeks ago, “is progressing.” He hopes Bogosian can start skating more in the coming days.

Bogosian still appears to be week-to-week. Naturally, watching is difficult for Bogosian, a self-proclaimed “rink rat.”

Notes: Eichel and winger Sam Reinhart both played their 10th games Thursday, meaning the first year of their entry-level contracts were activated. … Penguins defenseman Adam Clendening, a Wheatfield native, was scratched for the ninth time in 10 games this season. … Penguins forward Kevin Porter played 43 games with the Sabres over a two-year stretch. … Penguins backup goalie Jeff Zatkoff made his season debut Thursday, his first NHL start since April 14, 2014.