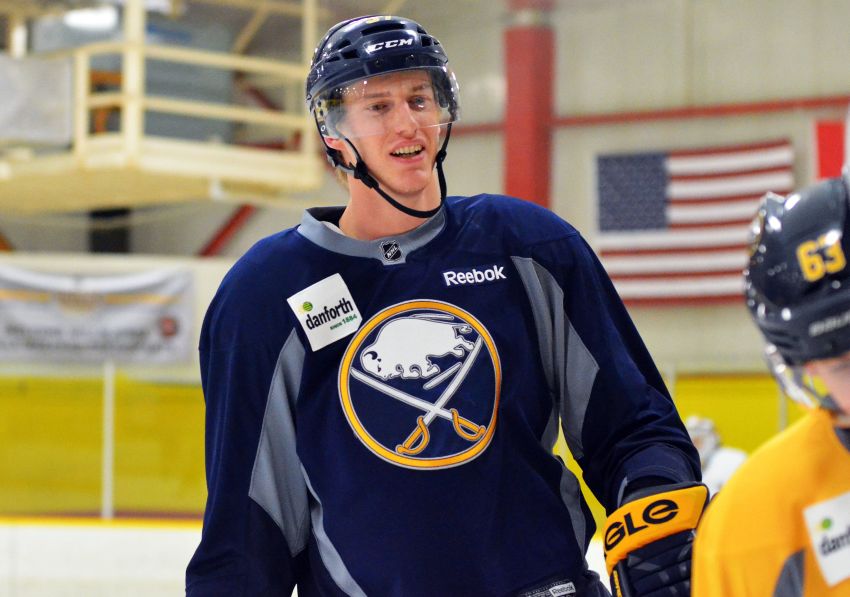 BUFFALO – Tyler Myers needed some advice. Just four games into the season, the struggling Sabres defenseman had already compiled a wretched minus-7 rating. He was starting to lose ice time.

For all the preseason hubbub over his productive summer, the 23-year-old hadn’t showcased any improvements in his wobbly game.

So following his minus-3 performance in the Sabres’ 4-1 loss to Columbus on Oct. 10, Myers reached out to Jim Corsi, the goalie coach.

Myers and the affable Corsi, a former NHL netminder, “had a really good conversation,” he said.

“He’s a guy that’s a really good person to talk to try to sort things out,” Myers said Saturday after the Sabres prepared for this afternoon’s tilt against the Detroit Red Wings inside the First Niagara Center.

That talk, Myers said, “was the turning point for me, especially defensively.”

“It really flipped the switched it seemed like,” he said inside the Riverside Ice Rink.

Myers played almost 25 minutes the next contest. He hasn’t been more than a minus-1 in a game since.

Most importantly, the 6-foot-8 Myers is slowly recapturing his confidence and aggression. He’s looking like a slick puck-moving defenseman again.

“Personally, I really like where my game’s going,” said Myers, who scored a power-play goal in the crease early in Thursday’s 4-1 loss in Philadelphia.

“Those type of guys, they’re big and they can us their big stick and they can use their big body, protect the puck and move it out of our zone,” Nolan said. “He’s such a fluid skater, with that reach he can do a lot of things for us.”

Reaching this point has been a long, arduous process that started long before Myers’ talk with Corsi.

For years – whether it was trying to duplicate his dynamic 2009-10 Calder Trophy season or living up to his seven-year, $38.5 million contract – Myers “was putting a tremendous amount of pressure” on himself, he said. His mistakes consumed him.

Myers began working with Barbara Meyer, a sports psychologist, during the offseason, something he said has made “a huge difference.”

“It’s been a process, for sure,” said Myers, who has two goals, six points and a minus-10 rating in 24 games. “It’s not like that has been happening overnight here.”

Meyer has worked with Myers to help him “react to things when they happen” and change his mindset.

“I think the biggest help has been when something bad happens, when a mistake is made, when you have a rough one, don’t worry about it,” Myers said. “There’s 82 games.”

He has 58 games left this season with Nolan, who replaced Ron Rolston, a big Myers supporter, four contests ago.

So far, Myers has impressed Nolan, who loves aggressive hockey.

“I’ve seen a world-class defenseman,” Nolan said. “This kid has got everything. He’s got size. He’s got ability. He’s got reach, and he’s got something that very few players have. We got a good one here. We just got to make we get his confidence back to where it was and continue to move forward with him, because those guys are to find.

“So I really like what we saw. There’s a few things in his game we got to correct. Outside of that he’s going to be a great one.”

Myers said he’s still getting to know Nolan. But their first conversation made him feel comfortable.

“He told me that it’s a game of mistakes and at my age I’m going to make mistakes and to not worry about it, just to keep playing,” Myers said. “I think for me just to hear that just made me feel that much more comfortable to take a little bit more risk and to start getting back to my game.