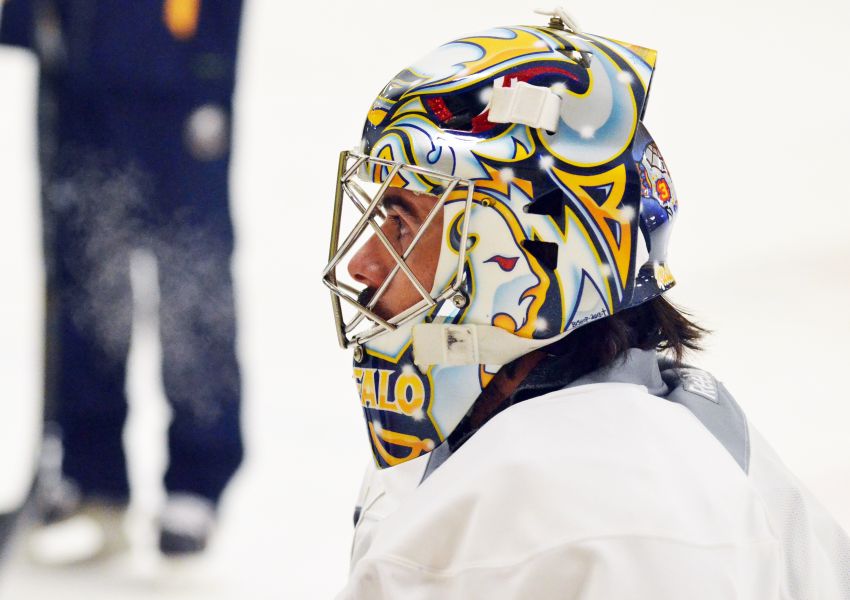 The Riverside Ice Rink was so cold Saturday that Ryan Miller could see his breath. ©2013, Dan Hickling, Olean Times Herald

“We’re running around the defensive zone a little bit too much,” Nolan said Saturday after the Sabres prepared for this afternoon’s game against the Detroit Red Wings inside the First Niagara Center.

“We got a lot of young talent,” Nolan said inside the Riverside Ice Rink. “We got to make sure they mature at the right pace. He’s a veteran guy that has been around for a while. He can add some stability back there.”

Sulzer, who’s played 33 games with the Sabres, including one during a brief recall earlier this season, has two goals and seven points in 10 appearances with the Americans in his first AHL stint since 2009-10.

The Sabres waived him shortly before the season started.

To make room on the 23-man roster, the Sabres placed forward Cody McCormick, who left Thursday’s 4-1 loss in Philadelphia early, on injured reserved.

Meanwhile, John Scott practiced as a defenseman much of Saturday, meaning the tough guy’s likely out against Detroit, a team that rarely fights. Brian Flynn, a regular winger like Scott, centered the fourth line with Marcus Foligno and Corey Tropp, a healthy scratch last game.

“He’s a very intelligent player,” Nolan said about Flynn. “He said he played eight games at center ice last year. With the fourth-line position, we got to make sure we have reliable guys.”

The three players haven’t scored since Nolan took over four games ago.

“My simple philosophy in life is if it ain’t working, you ain’t working hard enough,” Nolan said. “You just got to … do things maybe you don’t want to do sometimes, and that’s go up the wall, dump it and go get it. Sometimes we want to carry it in and make a nice play.”