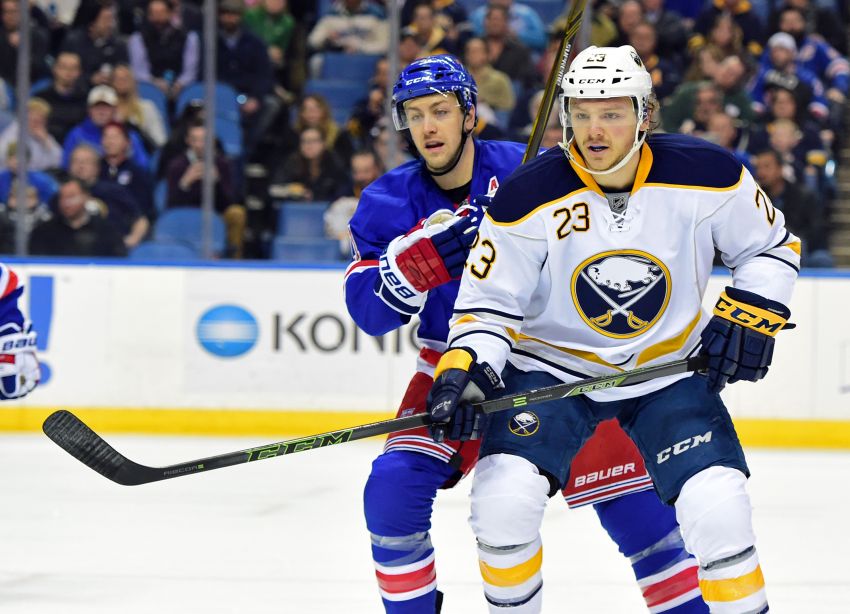 By late February, Reinhart, who regularly parks himself at the crease, owned an odd and lopsided stat line: 18 goals and nine assists.

Now, Reinhart, 20, has started showcasing his dynamic passing skills – anticipation and vision that compliment his soft hands – and upped his assists total by running off five straight in six games before scoring his 19th goal in Tuesday’s 4-2 loss to the New York Rangers.

“I don’t think much has changed in regards to the difference in it,” Reinhart said inside the First Niagara Center. “I think you’re going to go through spurts of scoring more goals and go through times with getting more assists. I was never too focused on it and knew it would probably even itself out eventually.”

Reinhart has been evening it out with some nifty plays.

When the winger intercepted Morgan Rielly’s pass down low late Monday, instead of instinctively shooting like many players would have, he waited a split-second and fed an open Evander Kane for the tying goal.

“(He had) the presence of mind and the smarts to find Evander on the backside there,” Sabres coach Dan Bylsma said. “I think the majority of the other players would’ve taken that puck, immediately shoot it on net. But he’s got the presence, the playmaking ability to make that play.”

His best assist was probably a nifty dish to Cal O’Reilly – he spun around in the left circle and fed a perfect blind backhander to the streaking forward – last Tuesday.

“I’m continuing to get a lot more comfortable in parts of my game,” Reinhart said. “There’s a lot that goes into getting better on a daily basis, and that’s one aspect I feel more comfortable with, for sure.”

Don’t think of O’Reilly as a late-season recall the Sabres simply added to fill out the roster for a few weeks.

“I always view the roster as about 32 people,” Bylsma said.

In his first NHL action since 2011-12, O’Reilly had one goal and four points in nine games entering Tuesday. Many veteran recalls don’t have a notable body of work in the big league, but O’Reilly has 14 goals and 45 points in 122 NHL appearances, a notable .36 points a game.

Bylsma said defenseman Cody Franson (neck) is progressing “slightly and slowly” and worked out off the ice Tuesday. He also said winger Tyler Ennis (concussion) has taken small steps recently. Both could play again this season.

The Carolina Hurricanes have signed forward Andrew Poturalski, a Williamsville native, to a two-year, entry-level contract. The New Hampshire forward’s 52 points (22 goals) rank second in the NCAA this season.