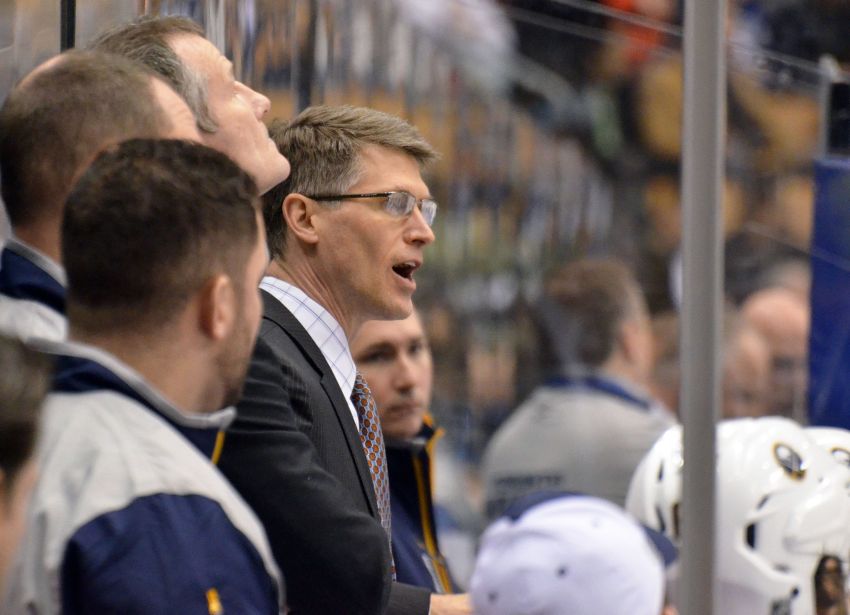 TORONTO – Ron Rolston walked to a podium Thursday afternoon inside the Air Canada Centre, surveyed the landscape before him – about 30 reporters and a dozen cameras – and immediately cracked his first joke as the Buffalo Sabres’ interim coach.

On Wednesday, Rolston was preparing his Rochester Americans for an AHL tilt against the Texas Stars. A day later, he was in charge of an NHL club playing a must-win game against the Maple Leafs in the self-proclaimed “Center of the Hockey Universe.”

“From what I saw, it was more there were just a lot of shortcuts … a lot of rest in shifts,” Rolston said prior to the Sabres’ 3-1 loss to the Leafs. “The things that you just have to eliminate if you’re going to be a good hockey team.”

Sabres winger Marcus Foligno said about Rolston: “He doesn’t really get startled. I think that’s one of the biggest things. He’s calm. He can think in tough situations. He’s really good at explaining.”

When Rolston’s phone rang a little after 3 p.m. Wednesday, he thought Regier was calling about Amerks captain Kevin Porter.

When Cody McCormick cleared waivers at noon Thursday, officially freeing up a roster spot, Porter hit the ice inside the Air Canada Centre.

His new teammates tapped their sticks in appreciation before the center joined the workout.

Porter, a 14-goal scorer with Colorado two years ago, probably won’t be that guy. But Rolston believes the 26-year-old will help his struggling team. Porter has 15 goals and 44 points in 48 AHL games.

Porter wore No. 12 on Thursday and mostly centered Nathan Gerbe and Steve Ott.

“Middle of practice, too,” Sabres winger Drew Stafford said. “Sometimes you forget how ugly the business of hockey can be. We saw that in two ways (Wednesday).”

Defenseman Jordan Leopold, a healthy scratch Tuesday, hurt his hand during practice Wednesday and sat against the Leafs.

“We’re going to get him his development time when we can,” Rolston said.