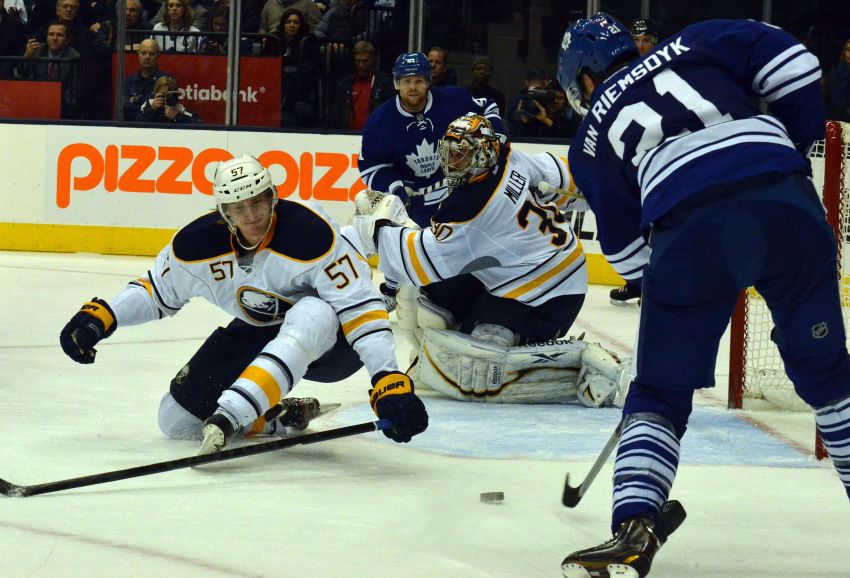 TORONTO – Well, maybe it wasn’t Lindy Ruff’s fault after all. Perhaps the Buffalo Sabres are simply a bad hockey club.

If they couldn’t cobble together a strong, 60-minute effort Thursday, a day after the Sabres axed the NHL’s longest-tenured coach, will they ever?

With the franchise reeling and Ron Rolston making his debut as interim coach, the Sabres played another terrible second period, allowing two goals, the difference in the 3-1 loss before a capacity crowd of 19,743 fans inside the Air Canada Centre.

The Sabres have lost three straight contests, five of six and appear destined to miss the postseason for second straight year as they sit in 14th place in the Eastern Conference.

It was the same, tired result, just with a different coach this time.

Why do the Sabres, who’ve allowed a stunning 28 second-period goals in 18 games, perform so poorly during the middle 20 minutes?

“Longer changes and we don’t have the puck,” said a visibly frustrated Ryan Miller. “If we don’t get the puck we’re not getting it deep. There you go. Start from the simplest thing you can do and go from there.”

Does the Sabres goalie shake his head the problem hasn’t been fixed?

“Guys got to execute,” said Miller, who stopped 33 shots. “It’s brought up. It’s mentioned. It’s highlighted. I’m trying not to be caught up in it too much.”

Still, Miller’s hopeful the Sabres can turn their season around. Rolston has immediately impressed him.

“We’re moving forward,” Miller said. “I think Ron’s a good coach. He has a nice style about him. I like the way he thinks the game. He’s laid out a few things for us.”

The Sabres started strongly enough for Rolston, who said it “was a great feeling” emerging from the tunnel and walking onto an NHL bench for the first time.

Dion Phaneuf’s power-play score tied it 1:15 into the second period. Then officials waived off Steve Ott’s go-ahead goal at 7:08, ruling Kevin Porter interfered with Scrivens, who was outside the crease.

“Their guy pushed me in a little bit and I got a little bit of a piece of him,” said Porter, who played 14:34 in his Sabres debut. “I didn’t think it was a great call, but obviously I got enough of him where he went down and there was an empty net.”

“The goalie’s well out of his crease and he slides into the play,” he said. “I mean, I don’t know too many guys getting that call right now. I wouldn’t even vote for that call. If I’m that far out and I’m leaning into a play, I expect to have to recover.”

James van Riemsdyk, who played under Rolston with Team USA’s development program and speaks glowingly of the coach, scored at 18:04, converting a two-on-one break.

“I didn’t like our second period, obviously,” Rolston said. “That was probably our turning point.”

Van Riemsdyk scored again with the Sabres down two men 14:28 into the third period. The Leafs had two power play goals at home all season entering the tilt.

“(Rolston) is a big reason for the success I have as a player,” van Riemsdyk said. “He’s the type of coach who instills that confidence that you need to play at this level. He put me in every situation and obviously there were some growing pains there, but the respect he showed me was special.”

The Sabres continued giving Miller little support defensively or offensively. They have only 10 goals in the last six games. Despite the Sabres’ 6-11-1 record, Miller has dazzled most nights, giving them a chance to win.

“He’s been playing unbelievable,” Sabres winger Marcus Foligno said. “It sucks right now. It’s not a good feeling when he’s making glove save after glove save. We’re not helping him. … He’s our best player, for sure.”

The Sabres tidied up their game a bit Thursday. Rolston, who said they had been taking shortcuts and resting within shifts, noticed improvements.

“I saw some positive things, and really the talk on the bench was positive in terms of the things we wanted to do and needed to do,” Rolston said.

Rolston will convey that message to his team later. He doesn’t talk to players after games, preferring to watch video to “get focused on what the message needs to be instead of just emotionally throwing something out there.”