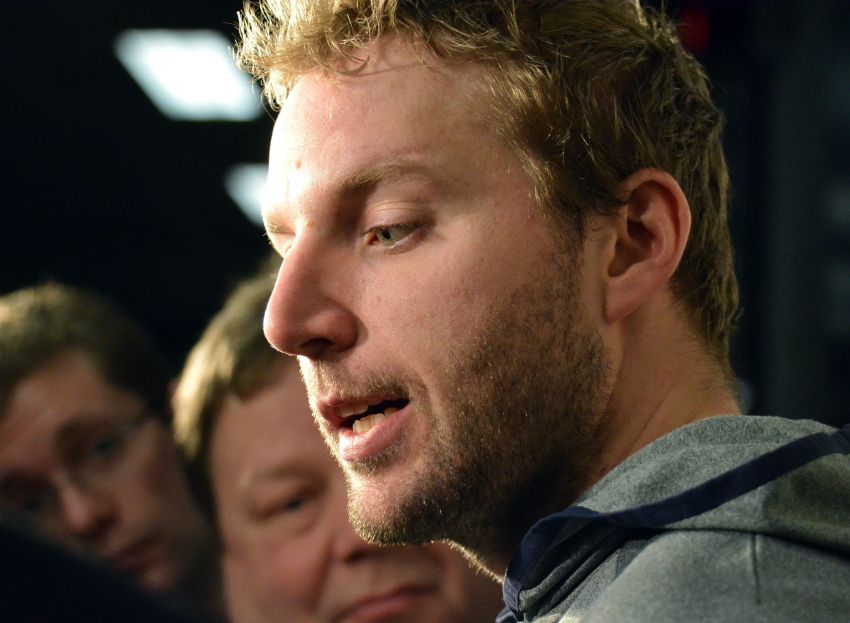 TORONTO – A day later, Lindy Ruff’s dismissal as coach of the Buffalo Sabres after 15 seasons still hadn’t sunk in for some of his former players. For 13 current Sabres, Ruff was the only NHL coach they had even known before Ron Rolston took over on an interim basis Wednesday.

Ruff’s firing following the Sabres’ terrible 6-10-1 start stunned them. He had just led a 90-minute practice. But when Ruff boarded the team bus in Amherst later in the afternoon, it was to say goodbye.

“He was … a little bit emotional,” center Tyler Ennis said this afternoon inside the Air Canada Centre after the Sabres prepared for the Maple Leafs. “Everyone was surprised. Everyone was in shock.”

“I’ve never been a part of something like this,” he said. “My first emotion was sadness. He gave me a shot at the NHL. It was always my dream to play in the NHL, and he was my first coach. He gave me a chance, and I’ll forever be grateful for that.”

Sabres winger Thomas Vanek said he keeps “waiting for Lindy to come back.”

“But obviously that’s not going to happen,” Vanek said. “As a group, we have to move on and get better.”

The two-hour ride to Toronto started off quietly, Sabres captain Jason Pominville said. But players began realizing what had happened about an hour later.

“Then we went out for dinner and we were able to talk about it a lot,” Pominville said. “It was tough to even believe what had happened. You’re used to seeing him at the rink every day. For my pro career, he’s basically been the guy, so it was really tough.”

No one saw the move coming, Sabres winger Drew Stafford said. He said players were sitting on the bus talking about forward Cody McCormick getting waived, “how the business of hockey can be ugly at times, how a great friend can be gone just like that.”

“All of a sudden,” Stafford said, “Lindy comes on the bus and shares the news with us. … It got emotional pretty quickly.”

Sabres winger Marcus Foligno added: “We knew that it’s on us and it’s our fault.”

Seeing Rolston on the ice this morning instead of Ruff was hard to process, Stafford said.

Ennis added: “It was weird, yeah, totally. He’s the only NHL coach I’ve ever had, and him not being out there was strange. It’s business and that happens.”

Sabres haven’t forgotten how Ruff molded them from green youngsters into NHL players.

Ennis began his NHL career as a winger before Ruff switched him to center, a position he loves playing.

Many observers feel the respected Ruff will quickly become a sought-after coaching candidate.

Leafs coach Randy Carlyle, who won the Stanley Cup with Anaheim in 2007, experienced a similar situation last season, getting fired from the Ducks after a 7-13-4 start. But the Leafs hired him before the season ended.

“And then the phone goes quiet,” he said. “Then you don’t hear from a lot of people in the weeks after. If he wants to stay involved in the game, and I’m sure he wants to coach again. I would say there’s a two-week period or a month, or whatever suits you best for you and your family, and then you get back out there. That’s what I did.

“I give him a ton of credit,” he said. “He did change and I think he changed for the better. Obviously, the results didn’t show it. I thought he did the right thing. The way things were going inside the room, there was no quit in us. It’s hard.

“But he becomes a top free agent now, and whoever gets him is going to get a very good coach.”