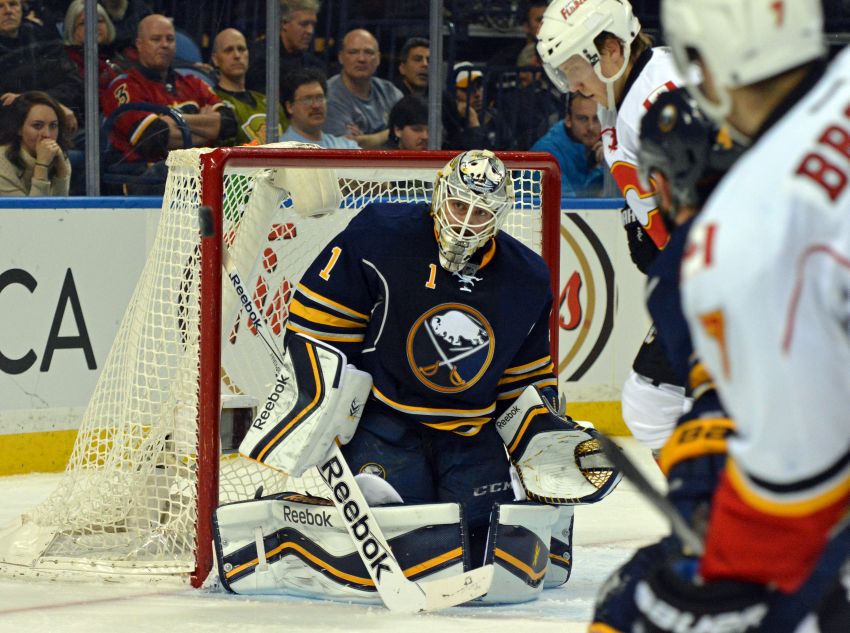 BUFFALO – The Sabres have lived oh-so dangerously in their victories this season. Getting outshot by double digits and handling the puck for just a small portion of the game is usually a recipe for disaster.

Somehow, the rebuilding club has managed to find success with opponents controlling most of the play.

Despite getting outshot 45-19, the Sabres won again Thursday, using two third-period goals to rally and beat the Calgary Flames 4-3 before an announced crowd 18,208 fans inside the First Niagara Center.

The surging Sabres, the NHL’s laughingstock earlier this season, have won eight of their last 11 contests. They have only outshot an opponent in one win.

Clearly, the Sabres have created a belief they can win any game.

“It wasn’t one of our better games, but it shows the belief factor is starting to creep in,” Sabres coach Ted Nolan said. “It was pretty special, because we weren’t in the game but we still believed that we could come back.”

Sabres defenseman Josh Gorges added: “I think this team is starting to realize that you’re never out of a hockey game. Until that final buzzer goes you’re always in it, and you just keep fighting.”

The Sabres have fought ferociously most nights recently, using strong play from goalie Jhonas Enroth and some timely goal scoring to eke on wins.

Zemgus Girgensons tied the game 7:59 into the third period. Matt Moulson scored the winner at 12:31, redirecting Tyler Ennis’ pass in front with his skate.

A video review upheld Moulson’s second goal of the night.

Thursday was just the Sabres’ fourth game of four of more goals this season. All have come during this hot stretch.

“Now it’s going in, it’s (finding) a way,” said Sabres center Marcus Foligno, who scored once and had one disallowed. “They’re good plays, though. It’s not like we’re getting really lucky. We’re crashing the net, we’re getting greasy. That all comes from hard work.”

Yes, the Sabres are still in last place and rank among the league’s bottom-feeders, but how about this: they have crept to within seven points of the Eastern Conference’s final playoff spot.

Enroth has buoyed this run, playing like an elite No. 1 goalie. The Swede dazzled again Thursday in his 100th NHL appearance.

“I’m just trying to stay focused and create habits and really just be dialed into the game,” Enroth said. “That’s pretty much it.”

Moulson opened the scoring 5:34 into the second period. Foligno’s first goal in 20 games put the Sabres back up later in the period after Mark Giordano tied it on a two-man advantage.

“That was nice,” Foligno said. “It was a long drought.”

After a Foligno goal was disallowed for a high stick, David Jones and Sean Monahan put the Flames up.

But the Sabres never flinched. In October, they might have been buried in a similar game.

“We’re starting to believe that we can play, we can win,” Gorges said. “I think if anything, that’s the key to our success. When we come to the rink, we’re not second-guessing. … We’re saying, ‘We got a good opponent tonight, but let’s play our game.’”

Moulson added: “This team has taken a 180 from where we were at the start of the year. I think now we believe in each other, we’re competing a lot harder. We know what we have to do to have success and get wins. (We’re) doing a lot better job of getting those little things done.”

The shots against are still high. Gorges, however, believes opponent have pumped a lot of low-percentage shots on net.

“You got to look at the game, and sometimes the shot clock can say we’re outshot 10, 15 … but if their shots are from the outside and the goalie can see it, does that mean they’re outplaying us? No.” he said. Should we maybe be shooting more, doing the same thing? Maybe yes. But we’re finding ways to get those dirty goals at times. We’re keeping games close.”

Sabres center Cody McCormick left the game with an upper-body injury but should be fine, Nolan said.