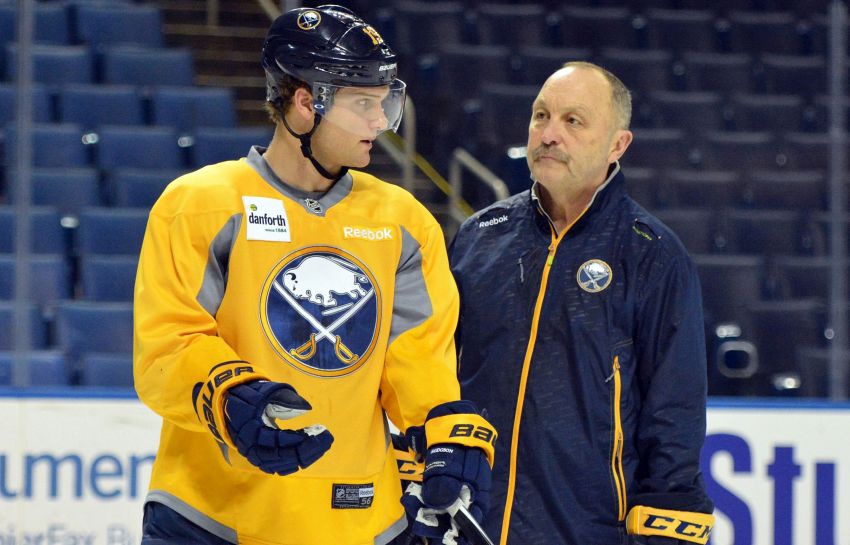 BUFFALO – Cody Hodgson’s benching likely won’t last long, coach Ted Nolan said. The struggling center is too important to the Sabres’ long-term success. They need the 24-year-old in the lineup to produce offense, something he hasn’t done all season.

Hodgson, the Sabres’ leading scorer a year ago, has one goal, three points and a minus-11 rating in 28 games.

Nolan finally scratched Hodgson for the Sabres’ 4-3 win against the Calgary Flames on Thursday inside the First Niagara Center.

“Maybe a game watching will get him out of that funk,” Nolan said.

Hodgson said he hadn’t been a healthy scratch since early in his career with Vancouver.

Hodgson is scoring at a stunning three-goal, nine-point pace.

Is Hodgson surprised about the scratch?

Stewart, meanwhile, skated on the right wing beside Marcus Foligno, who shifted to center, and Drew Stafford, who moved from right to left wing.

Seven years ago, Mark Giordano bolted from North America, all the way to the Russian KHL. Just 55 games into his NHL career, the Flames defenseman wanted more playing time and money.

“I didn’t really know if I’d ever come back,” Giordano said Thursday afternoon. “I thought I could be a good player in Europe for a long time if I had to.”

These days, the undrafted 31-year-old might be the NHL’s best defenseman. He has eight goals, 30 points and a plus-14 rating in 30 games for the upstart Flames entering Thursday. He has at least one point in 24 contests.

Giordano, who scored a power-play goal Thursday, has morphed into a strong Norris Trophy candidate.