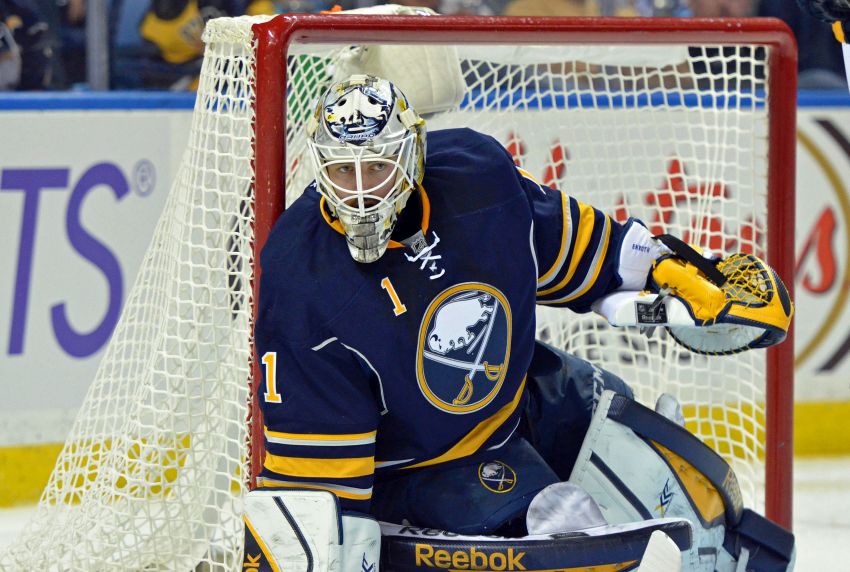 BUFFALO – Michal Neuvirth, the Sabres’ top goalie before a bruised knee briefly shelved him last week, has already recovered. The Czech has been practicing and appears ready to dress for Wednesday’s game.

But after recently starting six of eight games and seizing the No. 1 job, Neuvirth must wait his turn to play.

The goaltending tide is shifting again.

Sabres goalie Jhonas Enroth dazzled in Neuvirth’s absence, stopping 62 of the 64 shots he faced, including a 43-save effort in Saturday’s 2-1 win in Washington.

“Last game was almost like a statement game,” Sabres coach Ted Nolan said Monday. “He really wanted to get in there. He wanted to do something well, and he certainly did.”

For the time being, Enroth’s in the driver’s seat, where he began the season. The Swede will start Wednesday against Winnipeg.

“We want our goaltenders to make it difficult, and whoever’s playing well at that particular time is going to get the net,” Nolan said inside the First Niagara Center. “Right now, it’s Jhonas.”

In a season full of disappointments, strong goaltending has been the Sabres’ one constant. Both have performed well under near-constant pressure with little or no support.

The Sabres have allowed an NHL-high 36.9 shots a game and scored a league-low 34 goals.

“The one thing we never complained about whatsoever, even in our first 10 games, was our goaltending,” Nolan said. “Our goaltending has been there almost every game. They’ve been in tune every game. Lately, they’ve even stepped it up even more.”

“They’ve both played very well for us,” Sabres defenseman Tyler Myers said. “There’s been some games where it’s tough, because they don’t get the wins they would like. But if you’re there watching the game, they’re playing a whole lot better than the record shows. I think as of late, we’ve been doing a better job of helping them out.”

The Sabres have 12 goals during their three-game winning streak.

Enroth, the hard-luck loser many nights in recent seasons, has shaken off a rough stretch. Before making 19 saves in relief of Neuvirth in last Tuesday’s 4-1 win against San Jose, he allowed 16 goals in his previous three appearances.

“I kind of slipped a little bit there,” said Enroth, who allowed 11 goals in two starts against Pittsburgh.

Enroth began the season as the No. 1 netminder, starting five of the first six games. But with Neuvirth emerging and the Sabres losing, he was mostly relegated to backup duty.

The 26-year-old quietly stewed. Sitting during most of the Sabres’ California trip a month ago ticked him off.

He is a fierce competitor.

“He maybe does not show it on the outside, but certainly there’s a burning fire inside he wants to do well.”

Myers believes Enroth is “a gamer.”

“I think if you talk to any of the guys in the room, they’ll all say Jhonas is a big-time gamer,” he said. “No matter what the situation is, he brings it when it’s game time. That’s what you want out of a goalie.”

It’s easy to understand Enroth’s frustrations. He’s 7-25-6 in the last two seasons. He has more wins in the last week than he had all season. He had lost seven straight starts before this recent stretch.

“I’m sure it gets frustrating for him to be playing as well as he has … since we’ve been together, really,” Myers said. “He hasn’t really had any bad stretches.

“Obviously, the record hasn’t shown how well he’s actually played the last few years. For him to get a big win last game, we just hope that we can keep battling for him and get him a few more wins.”

A few more wins might help Enroth, an unrestricted free agent following the season, stick around.