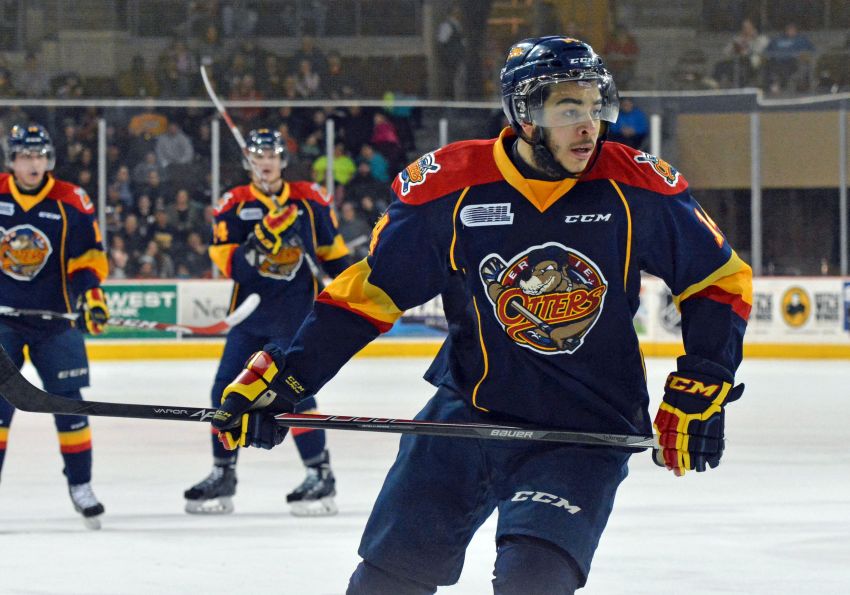 The Sabres selected Nick Baptiste in the third round in 2013. ©2015, Dan Hickling, Olean Times Herald

The Otters have McDavid, hockey’s biggest prospect in a decade; Dylan Strome, the league’s leading scorer; and Alex DeBrincat, who quietly scored 51 goals, more than McDavid or Strome.

Sure, adding Baptiste, who scored 45 goals last season, boosted one of junior hockey’s best offenses. The 19-year-old scored 26 times in 41 regular-season games following his November trade from the Sudbury Wolves. He scored twice in the Otters’ first-round series-clinching win against the Sarnia Sting last week.

Baptiste has kept scoring while embracing a bigger defensive role, becoming a strong two-way player. He knows he must play every facet if he wants to crack the NHL someday.

“I think I’ve taken pride in being a guy reliable in his own end,” Baptiste said by phone Sunday. “I think in Sudbury I was a little bit more focused on scoring because I think I needed to be that No. 1 guy. I’m able to still produce offensively, but I’m put into situations where I can shut down defensively and go out there for the last faceoffs and D-zone faceoffs.”

With the Otters, Baptiste’s a second-liner beside Strome. On most other teams, those players comprise two-thirds of a lethal first line.

“We’ve got some other guys who are pretty good, putting up points,” Otter coach Kris Knoblauch said. “We wanted (Baptiste) to be a two-way player. We believe he’s evolved into that. He’s become one of our top penalty killers. The last minute of play with a one-goal lead, he’ll be the guy on the ice. Yeah, he’s doing all those little things that we’ve asked him to do.”

He added: “I think he’s really evolved in becoming a solid 200-foot player.”

The 6-foot-1, 190-pound Baptiste, who credits Knoblauch for his success, likes to model his game after Anaheim’s Ryan Kesler and Philadelphia’s Wayne Simmons, two hard-nosed scorers.

“Those two guys are definitely guys I like to play like,” said Baptiste, who signed an entry-level contract last year. “I like to play with a lot of speed and (be) a guy that can play on the first line or the fourth line. I want to be versatile, and I think those guys are so important in the NHL.”

The last several months have been hectic for Baptiste, the 69th pick in 2013. He waived his no-trade clause to leave hapless Sudbury, which won 12 games all season, to join Erie.

“Coming here and playing with Connor and Dylan and the guys that they have here is obviously exciting and it’s been great,” Baptiste said. “I think adding my skills and what I bring to the table to their game already, it’s a positive for our team.”

In December, Baptiste got cut from Team Canada’s prestigious world junior camp for the second straight season. Still, he enjoyed the recognition.

“You’ve been noticed as one of the top players in the country,” he said. “That’s something special.”

So is the Otters’ lineup. Having so many high-end players immediately lifted some pressure on Baptiste.

“But I think pressure’s obviously still there because I still am one of the top-end players on the team, and I think that it’s a collective thing,” Baptiste said. “Connor spearheads our ship and he’s obviously the best player in the league, so when you have that tool in your back pocket, it’s obviously amazing, you can add so many good guys up front on our team.”

He added: “I love that pressure.”

“He wants to be better,” he said. “Not only does he want to win, he wants to move on and play in the National Hockey League sometime. The only way you can do that is you need to push yourself, whether that’s external pressure from coaches, fans, organization or from yourself. I think he puts a right amount on himself.”

The Otters, a team built to win it all, begin their second-round playoff series against the London Knights on Thursday. Of course, Baptiste’s focused on winning a championship. But he has thought about being a pro next season.

“I’m just going to go to camp and try to make the Buffalo Sabres,” he said.

Notes: The Sabres, who had Tuesday off, sent goalie Andrey Makarov and forward Tim Schaller to Rochester. Makarov’s assignment mean either goalie Matt Hackett (soreness) or Chad Johnson (ankle) could be ready to dress for a game. … No. 2 pick Sam Reinhart’s Kootenay Ice lost its seven-game Western Hockey League first-round playoff series to the Calgary Hitmen on Monday, so the center could be sent to the AHL soon.