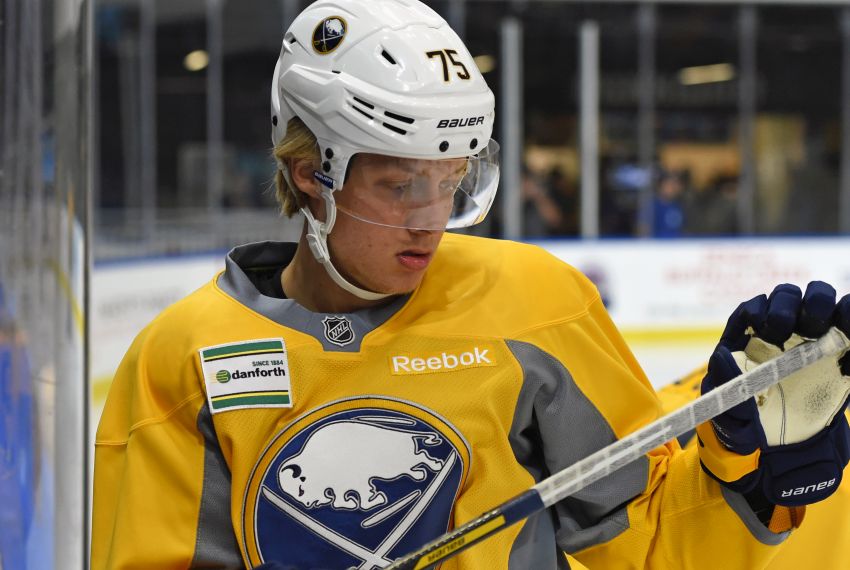 BUFFALO – Why now? Why did the Sabres recall top forward prospect Alexander Nylander on Monday of all days, with the Toronto Maple Leafs and his brother, slick rookie William Nylander, in town?

On one hand, the night was unforgettable. NHL debuts are always special, but could you imagine doing it against your brother? On the other hand, the pressure on Alexander Nylander, 19, only increased with his high-scoring sibling in town with the scorching Leafs.

“It’s kind of crazy I’m going to play against my brother my first game,” Nylander told more than 20 reporters prior to the Sabres’ 4-2 loss to the Leafs inside KeyBank Center. “I’m super excited, very pumped.”

The recall created an early buzz in the rink and put the spotlight on Nylander, the eighth overall pick in 2016, in the morning.

“That’s really kind of been the challenge for Alex this year playing in the American Hockey League,” he said. “You got to keep that in mind (he’s) just (19) years old. It’s a big challenge for him.”

What could help Nylander thrive in the NHL is the league’s structure, which is much more rigid than the AHL.

“Alex is a talented, skilled player,” Bylsma said. “He’s got deception in his game, both from his shot and his playmaking ability. Yes, I think there’s a good chance you’ll see him have maybe a little more success than he’s had so far this year in Rochester.”

Nylander said his father Michael, who made 920 NHL appearances, and his entire family attended the game.

To make room for Nylander, Bylsma scratched winger Matt Moulson for the first time this season.

Monday was the Sabres’ third straight game with a brother on the other side. Sabres captain Brian Gionta faced Stephen Gionta in Sunday afternoon’s 4-2 loss to the New York Islanders. Foligno faced Nick Foligno in last Tuesday’s 3-1 road loss to the Columbus Blue Jackets.