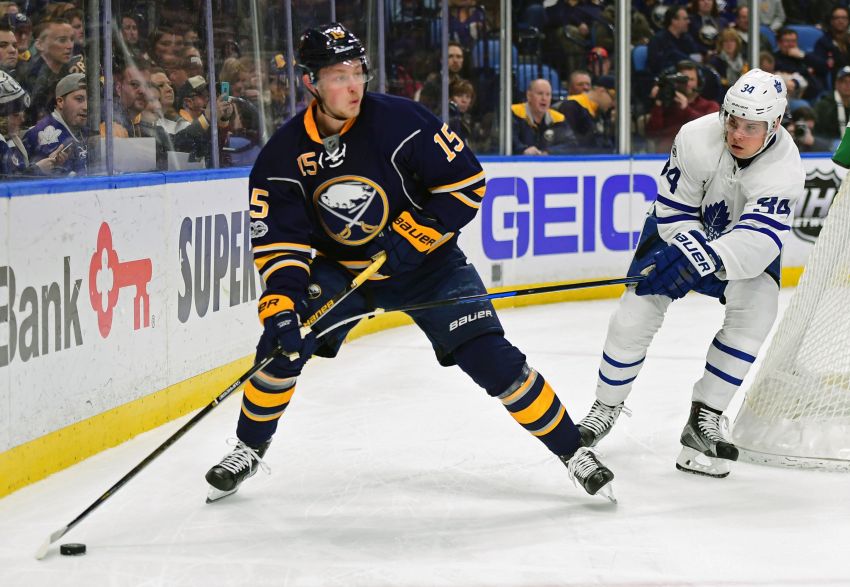 BUFFALO – For the opening 20 minutes of Monday’s 4-2 loss to the Toronto Maple Leafs, the Sabres were downright awful in their worst display of hockey all season. The embarrassing period, punctuated by a disastrous 43-second stretch, could have dramatic repercussions.

There have been a lot of bad periods over the Sabres’ six-season playoff drought. It can be argued Monday’s was the worst.

The upstart Maple Leafs outclassed the sloppy Sabres early before the bipartisan crowd of 18,829 fans inside KeyBank Center, jumping out to a 3-0 lead by the 5:09 mark.

The Sabres, meanwhile, didn’t even have one shot on goal.

“The first 10 minutes of the game, we basically handed them two of the goals, for sure,” Sabres coach Dan Bylsma said. “That’s no way to start a hockey game.”

James van Riemsdyk’s goal, the Leafs’ third in less than a minute, ended Sabres goalie Robin Lehner’s night prematurely. Lehner, who made two saves, departed for the dressing room and stayed there for the rest of the period.

“We’re standing there, we miss our assignments,” he said.

Incredibly, the Sabres’ fiercest rival outshot them 18-2 in the first period and 45-22 overall.

The Sabres finally recorded their first shot – it looked like it possibly never reached the net – 8:50 into the game. Their only other shot was a feeble 36-footer.

The Leafs ended the period up 3-0, giving them enough to win their fourth straight game and for the seventh time in eight tries. They can clinch a playoff spot tonight.

The Sabres, meanwhile, are seventh in the Atlantic Division, 17 points behind the second-place Leafs.

“These are games that are real easy to get up for, especially playing Toronto. We had an opportunity to play spoiler there. For the most part, we’ve played them pretty well this year. If anything, it’s a bit frustrating.”

Remember, the Sabres had beaten the Leafs two straight meetings, including a 5-2 victory here March 25.

“We had a lot of success against them … a week ago,” said Eichel, who scored a breakaway goal with 56 seconds left. “We didn’t do that tonight. They were hungrier. They wanted it more than us.”

So what the heck has happened to the Sabres in the last week? Has the communication broken down between the coaches and players? No, Eichel said.

Three more games are left this season, starting with Wednesday’s home finale against Montreal. Could it be the last appearance here for some? Perhaps they can get up for that one.

Leo Komarov opened the scoring alone at the net at 4:26. Auston Matthews followed at 5:01, his 39th goal and 67th point, a new Toronto rookie record.

After van Riemsdyk scored off a faceoff, backup goalie Anders Nilsson replaced Lehner, bailing the Sabres out with a slew of big saves.

“He stepped in and shut the door for us,” Bylsma said.

Nilsson made 39 saves. Only Nazem Kadri beat him on the power play 5:50 into the third period. Ryan O’Reilly scored the Sabres’ first goal short-handed 1:51 into the second period.

Nylander said: “It’s a fast-paced game. There’s a lot of great players out there. Just work hard every shift and try to create as much as possible every shift.”