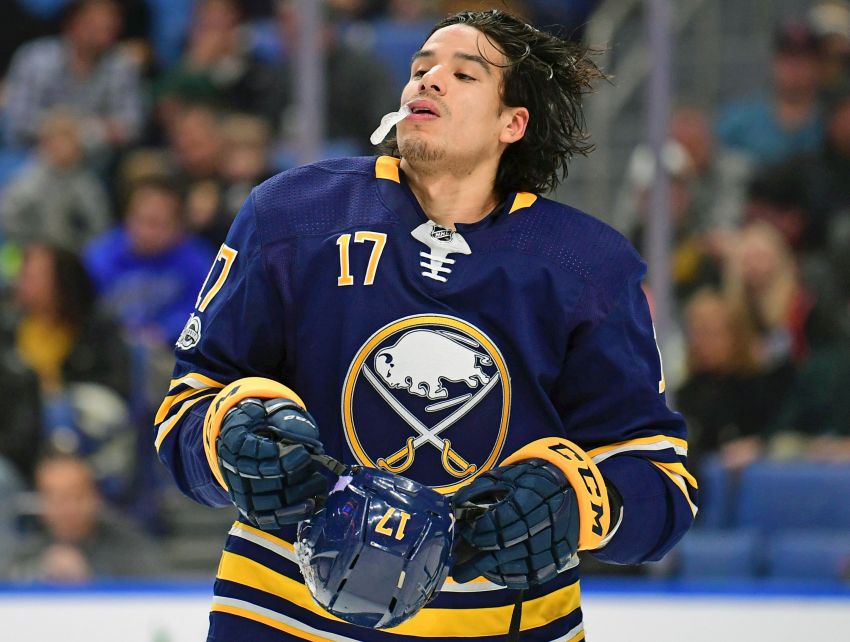 BUFFALO – To ignite the NHL’s worst offense, Sabres coach Phil Housley has been changing lines almost every day, moving players up and down the lineup.

So it wasn’t shocking to see winger Jordan Nolan, who has scored 22 times in 315 career NHL games, at left wing on a “scoring” line beside center Ryan O’Reilly and Kyle Okposo during this morning’s practice.

When you’ve been blanked in two straight games, promoting a fourth-liner isn’t that radical. Nolan scored twice in last Wednesday’s 5-4 loss to Minnesota.

“The way he’s been playing in the last three or four games here, he scored a couple goals recently,” Housley said. “I like the way he attacks the game. He’s using his speed, he’s getting the opportunity, he’s controlling the puck down low in the offensive zone, he’s willing to go to the net. He brings a physical element to the game as well.”

The 6-foot-3, 219-pound Nolan recently showcased some strong chemistry with Okposo and center Jacob Josefson, who tweaked his right ankle and is back in a walking boot.

“It’s great,” Nolan, a preseason waiver claim from the Los Angeles Kings, said of his new line. “I came in here looking for a new opportunity and I think I’m playing well. … We all hang on to pucks. I think we all play the right way.”

Okposo said: “(Nolan’s) really heavy in his battles, wins a lot of one-on-one pucks … and kind of creates time and space for his linemates.”

Meanwhile, TV crews from “Road To The Winter Classic,” the documentary series that will air on NBCSN, according to ESPN, leading up the Jan. 1 outdoor game have arrived in Buffalo.

“It’s just getting used to the people around you, that’s going to be an adjustment for a lot of players in there, then it becomes second nature, you don’t even know they’re in the room,” Housley said. “I think it’s a great way to sell the game to our fans and our community, represent our organization in the best fashion.”

Update: The Sabres recalled goalie Linus Ullmark from the Rochester Americans on Thursday morning to practice for Robin Lehner.