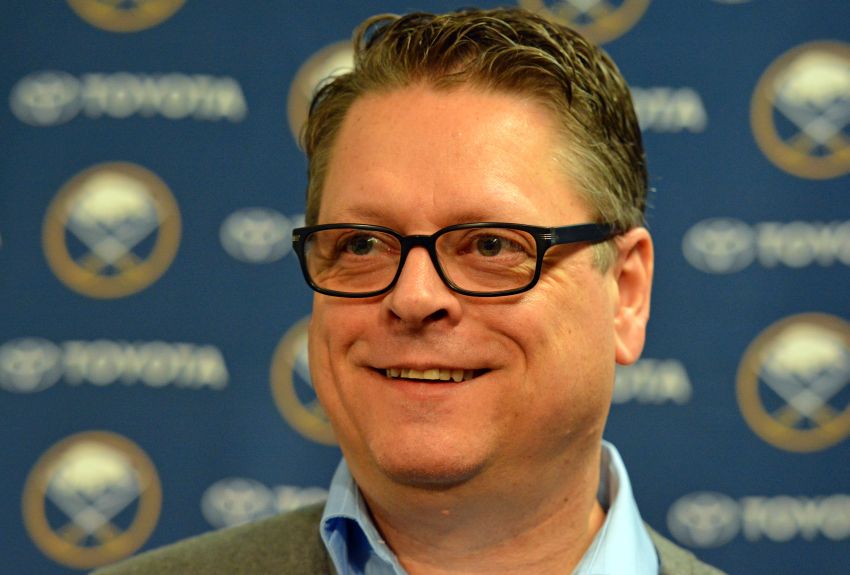 “My plan was to do something like this to speed it up,” Murray said inside the First Niagara Center after pulling off the NHL’s biggest deal this season.

The Sabres paid a steep price, however, dealing a stud defenseman, winger Drew Stafford, prospects Joel Armia and Brendan Lemieux and their latest 2015 first-round pick for the established NHL talent and a goalie prospect.

In the 6-foot-2, 198-pound Kane, the Sabres possess a talented 23-year-old whose character has been questioned over the years, most recently following an incident in which he reportedly didn’t show up for a game after some teammates threw his tracksuit – he apparently violated the Jets’ dress code – in the shower.

Murray knew Kane, the fourth pick in 2009, wanted a change of scenery and a more important role, something he believes the Sabres can give him. Kane scored 30 goals in 2011-12 and has 109 in his 361-game career.

“He can be can be an important guy here,” Murray said. “He’s going to be a big part of any success we have, I believe. You watch him play on the ice, he plays hard. He plays in traffic. He doesn’t play a perimeter game; he plays a heavy game. He scores goals from around the net. He plays the game right. He finishes checks. He’s a good fighter. I don’t know how much I want him fighting. That’s his character on the ice.

Dishing the 6-foot-8 Myers, a franchise-type defenseman and perhaps the Sabres’ best player, was difficult. The 2009-10 Calder Trophy winner had rebounded following some poor seasons, skating big minutes and moving the puck all over the ice.

About 10 teams were interested in Myers, Murray said. He knew the Jets had more to offer.

“That was the only way I would trade Tyler Myers, in a big, big deal,” Murray said. “Why trade him otherwise? There’s no point.”

The 29-year-old Stafford, the longest-tenured Sabre at nine seasons, will be a free agent this summer and was expected to be dealt. Stafford scored a career-high 31 goals in 2010-11 but struggled for parts of the past few seasons.

Armia, a slick winger who spent the past two seasons in Rochester, played his first NHL game earlier this season. The 21-year-old Finn was chosen 16th in 2011. Lemieux, meanwhile, a big winger, has 35 goals with the Ontario Hockey League’s Barrie Colts. The Sabres selected the 19-year-old 31st in June. The Jets requested Lemieux.

Murray shot down a report out of Canada that said Lemieux wouldn’t sign with the Sabres. The Sabres tried to ink him earlier this season but couldn’t reach an agreement.