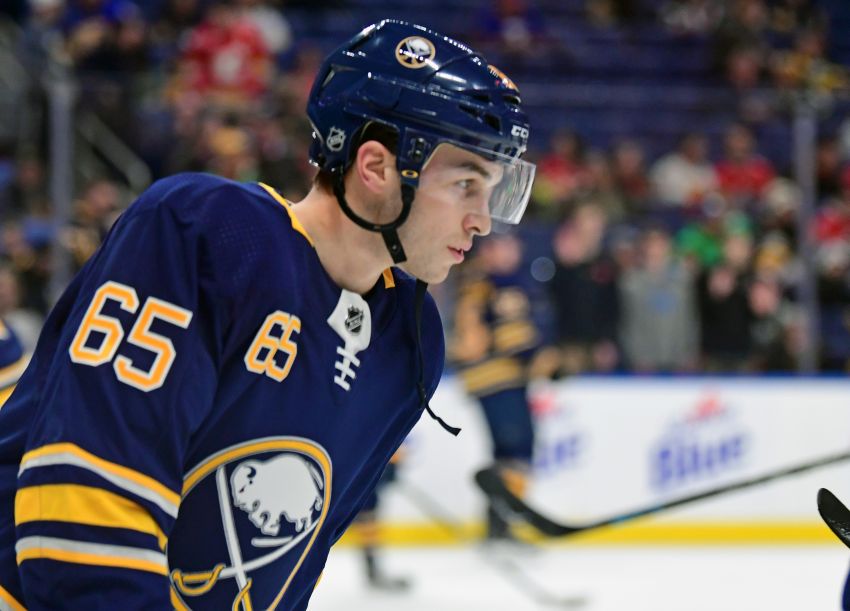 “Some (AHL) games I can handle the puck the entire game it feels like,” Griffith said prior to Wednesday’s 5-1 loss to the Calgary Flames. “But my goal is to do stuff like that up here.”

“When you get back up here, you worry about making a mistake and going back down,” he said. “I think … you just got to focus on your game and be confident with the puck, especially now, everybody seems a lot looser now playing (than earlier in the season).

Nine days after the Sabres acquired Danny O’Regan from the San Jose Sharks, they recalled the forward from the Amerks on Wednesday morning.

So, O’Regan played against the Flames, right? Well, not exactly.

The Sabres also have a road game tonight against the Ottawa Senators, so O’Regan, the only player they received in the Evander Kane trade, could debut soon.

“I could see him getting some games in the future here,” Housley said. “I think he’s just a really good, solid prospect for us right now, and he’s going to get an opportunity.”

“I try not to put that pressure on myself, but being a part of the Evander Kane trade – it’s not like it was a one-for-one deal, but I want to show the organization I can play hockey sometimes,” O’Regan said.

O’Regan, who will wear No. 65, skated in the pregame warm-up.

In a poll of players conducted by the NHLPA, Sabres center Ryan O’Reilly was named the league’s fifth-most underrated player, earning 2.3 percent of the vote.

Housley on slick Flames winger Johnny Gaudreau, who began Wednesday with 20 goals and 74 points in 67 games:

“He’s a world-class player. He uses his speed, whether it’s on the rush, his vision, his hockey sense is through the charts. He creates things by using his speed and his quickness to get away, he creates separation. He has a terrific shot, he knows where to put it.”