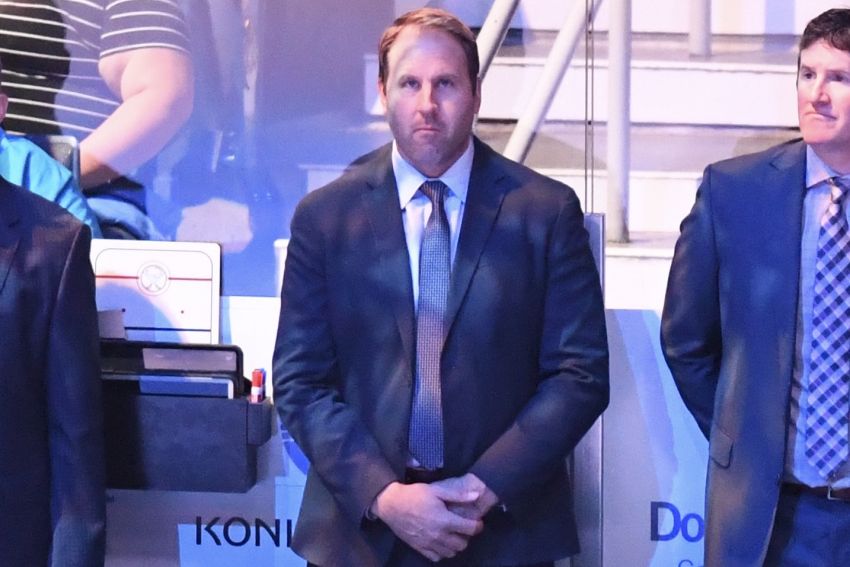 Matt Ellis (pictured) played for Lindy Ruff before coaching against him. ©2021, Micheline Veluvolu

BUFFALO – Of all the coaches the Sabres’ Matt Ellis could’ve faced in his first game filling in for Don Granato, it turned out to be the one he knows best, Lindy Ruff.

Ellis, 40, played under Ruff for parts of five seasons, growing from a forward the Sabres plucked off waivers into an NHL regular. One of Ruff’s assistants, ex-Rochester player and coach Chris Taylor, was an AHL assistant when Ellis played for the Americans.

Ellis said he learned a “ton” from Ruff, “watching his approach, the day to day, the structure that he implemented.” He said ex-Sabres assistant James Patrick and Mike Babcock, his first NHL coach with the Detroit Red Wings, also influenced him.

“He’s a tremendous person,” Ruff said of Ellis. “Got a lot of respect for Matty. Played the game the right way, played really hard. He scored a couple of big goals for me when I did coach him. He’s the type of guy that you knew was going to succeed whatever he does because he works really hard at it.”

The affable Ellis, who’s in his first full season as an assistant, took over after Granato entered COVID-19 protocol Sunday.

About seven hours before his debut running the Sabres’ bench, Ellis acknowledged he felt some “nerves and anxiousness just thinking ahead to coaching your first game in the National Hockey League.”

“But at the same time, there’s also a lot of excitement there,” Ellis said. “There’s a lot of honor and a lot of gratefulness that there’s enough faith in me to take the lead. Obviously, having great support around me never hurts.”

Ellis traces some of the comfort he feels in his new role to the environment Granato and Sabres general manager Kevyn Adams have created.

“We do in our room have a real collaborative day-to-day approach,” Ellis said of the coaches. “We’re always sharing, we’re always discussing, we’re always watching. We’re always sitting together, socially distanced, of course, these days, but I think that’s really helped me draw some strength. The guys have been great.

“Just in terms of the approach, there hasn’t been a drop-off or a letdown in terms of that, which really makes me happy to know that there’s a certain level of respect in the locker room that they have.”

“Ells, he’s goes into that category of people that just love the game,” Okposo said. “I’ve been around for a while and he’s right at the top of people who just care about the game and just want to be here.”

Amerks coach Seth Appert said prior to Wednesday’s home game against the Providence Bruins his team has five players in the AHL’s COVID-19 protocol.

Amerks coach Seth Appert said prior to Wednesday’s home game against the Providence Bruins his team has five players in the AHL’s COVID-19 protocol.

When goalie Mat Robson arrived in Rochester prior to the game to back up Michael Houser, he entered protocol. Bryan Haude, who played four years at Geneseo, dressed as the emergency backup.

The Amerks needed Robson because goalie Aaron Dell’s wife is in labor.

The Sabres have recalled five players in the last two days, so the Amerks signed four players to professional tryouts.

The Amerks fielded a lineup Wednesday with 11 forwards and six defensemen.

Ex-Sabres winger Jimmy Vesey, who’s in his first season with the Devils, entered COVID protocol before the game.