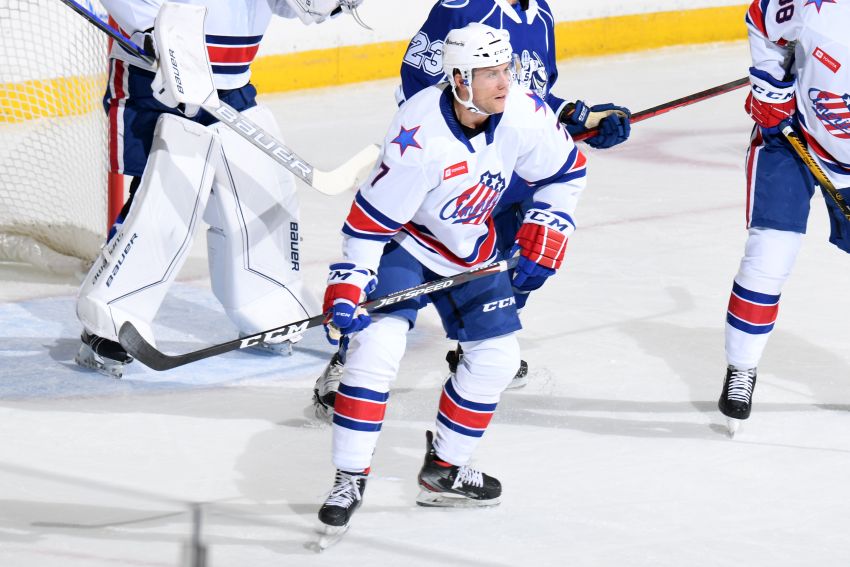 Ethan Prow has spent most of his career in the AHL. ©2021, Micheline Veluvolu

BUFFALO – Make that four. In addition to forwards Peyton Krebs, JJ Peterka and Alex Tuch, it appears another player, defenseman Ethan Prow, will be making his Sabres debut tonight.

Like Peterka, Prow, 29, has never played in the NHL. Ironically, Peterka and Prow were teammates last season with Red Bull Munich, a Deutsche Eishockey Liga team.

The Sabres this morning recalled Prow to the taxi squad and Casey Fitzgerald to the active roster because they’re down two defensemen. Jacob Bryson this morning entered the NHL’s COVID-19 protocol and Colin Miller’s undisclosed injury will force him to miss tonight’s contest against the New Jersey Devils. The Sabres have six players in protocol.

If the Sabres use Prow, they must elevate him to the roster.

Sabres assistant coach Matt Ellis, who will sub for head coach Don Granato while he’s in protocol, said it “looks like Prow” will be needed.

“Probably a pretty exciting morning for him,” Ellis said inside KeyBank Center.

Update: Prow has been summoned from the taxi squad.

The Sabres signed Prow to a two-way contract during the offseason.

“I know he’s a player that’s had to earn everything,” Ellis said of Prow. “You look at his story, he’s scratched and clawed between the American League and even East Coast League and earlier in his career spent some time overseas. He’s someone that’s earned an opportunity, leadership qualities going back to his college days.

“And speaking with Seth (Appert) and Mike Weber down in Rochester, they speak super highly of the dependability factor of him on the ice, great character guy in the locker room, and someone they’re very confident in his defensive game.”

Meanwhile, Tuch, 25, was ready to play Dec. 20 before COVID problems forced a postponement.

“I am ready,” Tuch said. “Excited. Honestly, everyone knows I’ve been itching to get back out there and to really be apart of this team, this franchise and this organization. It’s going to be really special pulling on that Sabres sweater, that’s for sure.”

“He added: “Not being able to pay the game on the 20th, I was really excited. It was a little bit of a downer, but hey, it gives me an extra week to get into it and get ready to go.”

In other news, Ellis said Ukko-Pekka Luukkonen will be starting tonight, his sixth nod this season.

Check back later for updates. The Sabres haven’t played since Dec. 17.

Here are the lines and pairs from this morning’s skate.

Will Butcher and Prow