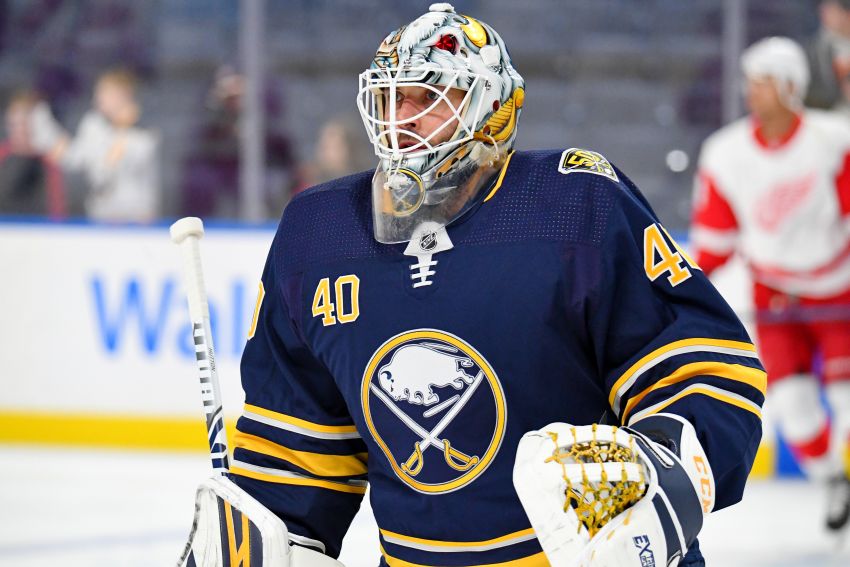 Meanwhile, the Sabres announced illness will keep winger Michael Frolik from playing tonight. The Czech did not travel with the team to Ottawa. He also missed Sunday’s 5-2 win over the Toronto Maple Leafs.

“We’re not worried about any of these injuries,” Sabres coach Ralph Krueger said after Monday’s practice inside KeyBank Center.

Following a brutal stretch in which he did not win a game for more than three months, Hutton has won four consecutive starts, compiling a 2.23 goals-against average and a .926 save percentage.

Krueger said the Sabres expect Hutton’s injury “to go away.”

“The maintenance is always a wide-open situation,” he said. “But we feel comfortable with him dealing with this maintenance.”

The Sabres still have an extra goalie, Andrew Hammond, on the roster.

Following Tuesday’s game, the Sabres have off until Saturday afternoon.

Hammond, 32, hasn’t visited Ottawa as an opponent since the Senators traded him to the Colorado Avalanche early in the 2017-18 season.

While Hammond wasn’t sure if he would accompany the Sabres on the trip, he said returning to Canada’s capital would be special.

Hammond will always own a place in Senators lore.

Five years ago at this time, he was in the midst of a dominant stretch as a rookie.

“A lot of memories, a lot of people in that organization I still stay in touch with,” Hammond said. “If that were to happen, it would definitely be special.”

Update: The Sabres have sent Hammond back to the Amerks and recalled winger Scott Wilson.

The Sabres, who have won three straight games, have struggled against the Senators this season, losing two out of the three meetings.

Despite having earned only 51 points and ranking 29th overall, the Senators’ strong worth ethic complements some high-level talent.

“They’re very structured in the way they play and they play hard,” Sabres winger Kyle Okposo said. “I just think we didn’t get anything in the offensive zone the last game, they really suffocated us and they didn’t give us a lot of time and space.

“We’re going to have to work tomorrow night. It’s going to be a grab your lunch pail and go to work.”

Krueger said: “If there’s one thing I credit them with, is they do work hard. They do not quit, they try their best and they’re dangerous if you let them be, and that’s what we’re concentrating on with all the extracurricular activities (like the trade deadline).

“But so far, our team’s done well when there’s been noise in the building, and there’s going to be noise in that building.”

That noise will be the jersey retirement of former defenseman Chris Phillips, who wore No. 4 for 17 seasons with Ottawa.

“It’s nice, have a good smile about it and something I’ll definitely look back on, for sure,” Okposo said of the milestone.

Okposo registered his first point in his second NHL outing with the New York Islanders, assisting on Blake Comeau’s goal on March 21, 2008 versus the New Jersey Devils. He scored his first goal later in the game.